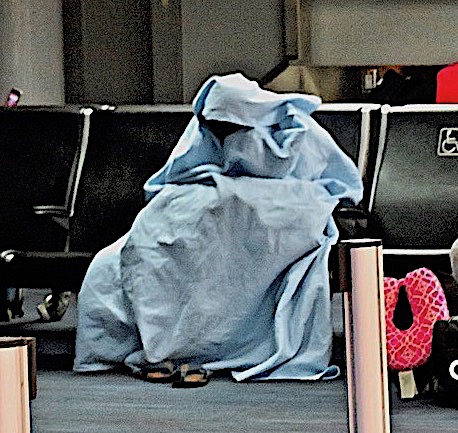 Please post your favorite photos
on the theme of “Pleasures of Air Travel”
and post a link in the comments of this site.

Here’s a poem I wrote about air travel a year and a half ago.  Seems appropriate, so I’m reblogging it. Complain, complain.

Open Letter to the Airline Mucky-Mucks

To Whom It May Concern:

My carry-on’s too heavy to lift above my seat,
so I had to put it under, now there’s no room for my feet.
I request some water (though I’ve been twice rebuffed,)
to take an antihistamine, for my eyes are puffed
from the perfume of my seatmate, which also made me cough.
So I’m already hurting long before lift off.
I’ve squeeze marks from the narrow seats, I’m shivering from the draft,
and when this ride is over, I must board another craft!

Two hours later, two states up, I face another battle
trying to find a decent airport meal here in Seattle.
On my muffuletta sandwich (priced $15.93),
I look in vain for olives, which there don’t seem to be.
My Tim’s potato chips are stale, the sodas are all flat.
The Wifi that they advertise does not know where I’m at.
Air travel’s an adventure but not the one I sought.
I forget this lesson once again, refusing to be taught.

One hour left ‘til I lift off to wing my way on east,
I buy a drink and steel myself to board your winged beast.
I hope this time my seat mate fits in his own seat
so I don’t have to deal again with the impossible feat
of leaning out into the aisle, avoiding every ass
of passengers and stewards that brush me as they pass.
I bitch, I whine, I grouse, I cry, complain and moan and sigh.
‘Til by now I’m sure you wonder why I even fly.

I must admit I’ve asked myself the same as I’ve been talking.
The only reason I have found is that it sure beats walking.

30 thoughts on “Pleasures of Air Travel”