I have been so busy getting ready for my three-month move to the beach that I didn’t even consider that I’d be driving past Colima—one of the most active volcanoes in North America. I had read about the recent lava flow down the south side, the ash warnings with evacuation suggested in certain areas, and unusual activity in the months leading up to now, but my concentration today was mainly on Morrie, my surprise companion on this trip to La Manzanilla.

Long story short, my house sitter had to cancel on short notice. No house sitter—no one to live with Morrie and Diego. The result was that a friend took Diego while I brought Morrie to the beach with me. Other than his time in the animal hospital when he broke his leg two years ago and a handful of times someone let him slip out of the gate and he took off like a bat out of hell, this is only his second time away from his own yard as well as his first time away from Diego.

Today’s six-hour journey in the car must have been like a trip to a foreign planet to him. For hours, he seemed to be searching the surrounding world as we passed it by. I looked over at one point and Colima Volcano was sending up a huge balloon cloud behind him. It was a gorgeous shot. Unfortunately, there was no place to pull off and a big truck coming up fast behind. By the time I got to a pull-off spot, this is the view that presented itself: 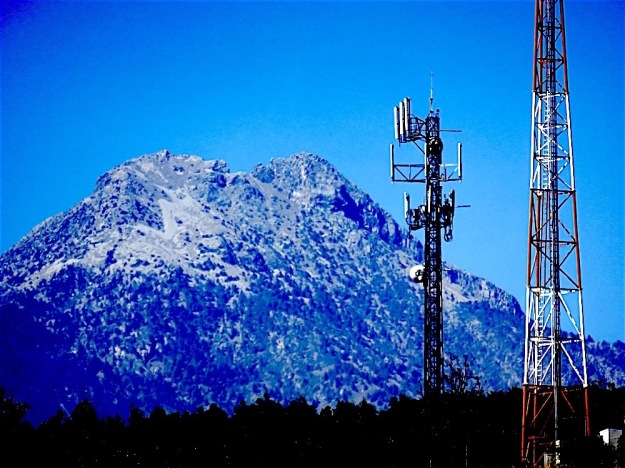 I barely noticed the volcano in the background as the towers dominated, and it had ceased venting.

Now, here is Morrie interspersed with the scenery we were passing. Luckily, Colima vented again a few times, but not nearly at the magnitude it had that first time I viewed it.

Again, click on first photo to enlarge them all. 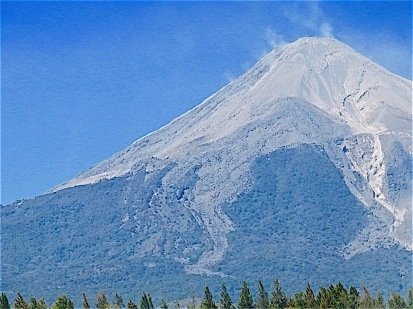 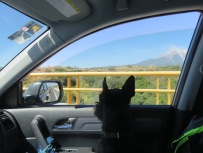 This late afternoon and evening, Morrie had his first introduction to the beach.  It is a tale in itself, but I need sleep right now more than you need a longer story; so, perhaps tomorrow I will tell it along with at least one other that had a surreal quality to it.