Beat this sky, if you can!!  One of the best of countless fabulous sunsets in La Manzanilla.
(Click on photos to enlarge.) 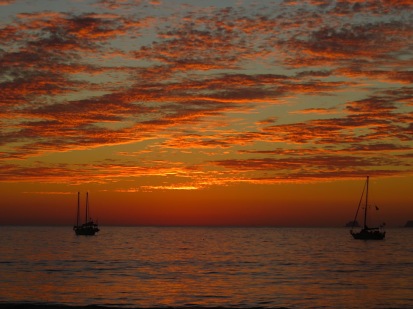 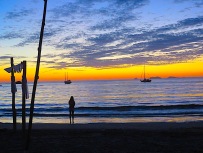 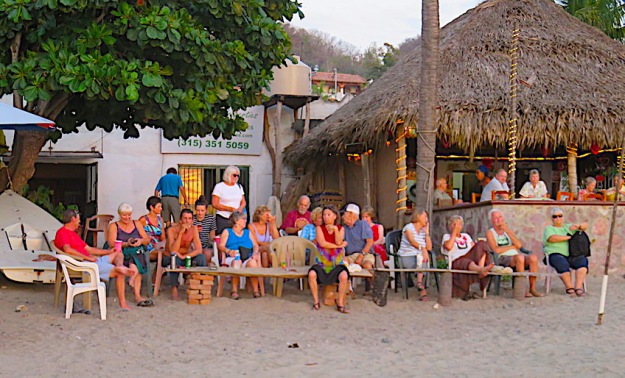 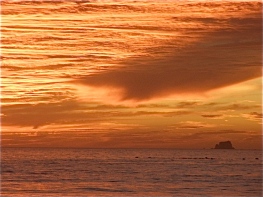 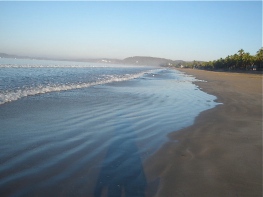 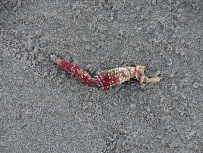 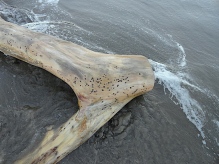 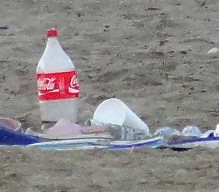 The constant undulation and the murmur of the waves.
The crashing of the breakers as they beat against the caves
carved out by the chisel of the water making hives
at the edges of the world that ensconced our busy lives.

It craved us as its audience. It pulled us to its shore.
It calmed our petty grievances with its might roar.
When it chose to rage it could wipe away our world,
sweeping us away as its anger came unfurled.

At other times it lapped at us, assuaging all our pain.
That’s why we returned to it, over and again.
Walked along its edges, pierced its salty deep,
uncovering the secrets so long within its keep.

Every morning it brought treasures to our waiting hands
to examine as we walked along the morning-evened sands.
Dollars from the ocean depths, stars out of the sea––
left there to be taken or to be let be

for the next beachcomber to claim them for their own
to treasure on a mantel what the sea had thrown
like necklaces at mardi gras, cast blindly and for free
for denizens of dry worlds to collect on bended knee.

What we cast back on the waters determines ultimately
what the sea will one day give back to you and me,
and if we do not listen to the truth the tides may tell,
the music of the waves may be our funeral knell.

The prompt today is undulate.

The challenge was to take photos of the backs of things. Some of these are way too small in this collage.  Click on the first photo to enlarge them all and see captions. 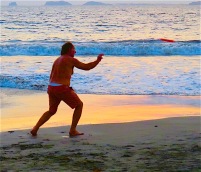 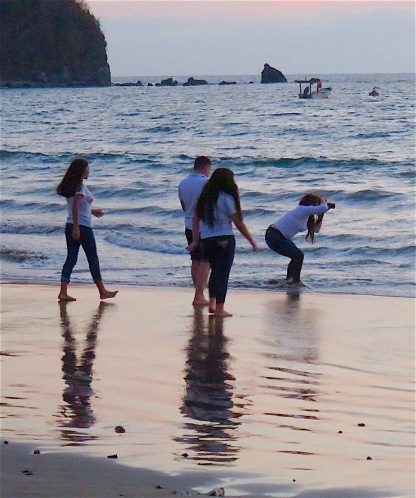 Behind the Family behind the Surf. 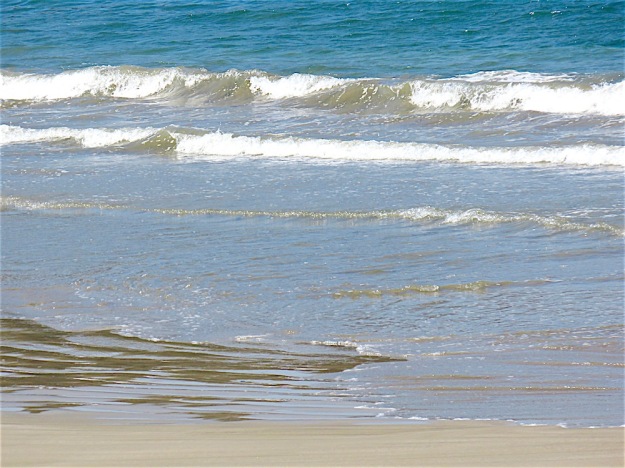 Since the fish refuse to come and play,
the fishermen have gone away.
And since there are no fish to score,
the birds have found another shore
to swoop over and sit upon.
The beach is empty when fish are gone.

Yesterday a busy throng
milled on the beach the whole day long.
But today they’ve gone to job
or school or kitchen—the whole mob.
My world is quiet. The ocean swell
once more has a tale to tell
purely itself. No interlopers.
No beer-swiggers or docile dopers.

No kids squealing as they wade
with parents watching from the shade
of palapas strung along the shore
close enough to ocean’s roar
to grab a toddler grown too brave
from the grasp of an ambitious wave.

Once more, the beach is just itself.
The sand has formed an unmarred shelf
just outside my beachside door.
No beach shovels to scoop and gore,
no sandcastles along the shore.
No footsteps strung along the beach
extending far above wave’s reach.

No butts or bottles, abandoned sandals.
No beach graffiti by vandals
innocently written in the sand
with a stick held in the hand.
“Chuy loves Luz” erased by wave,
impossible, perhaps to save
in either beachside sand or heart,
their teenage love doomed from the start.

All these stories tucked away
by one of few who chose to stay
after the throng has returned home,
leaving only ocean foam
that overnight swept them away.
Every morning, a clean new day.

The prompt word today was minimal.  I used the theme for the poem, but not the word itself.  If you are a prompt-purist and feel the word must be seen, read on:

You won’t find the word “minimal.”
Its presence is subliminal! 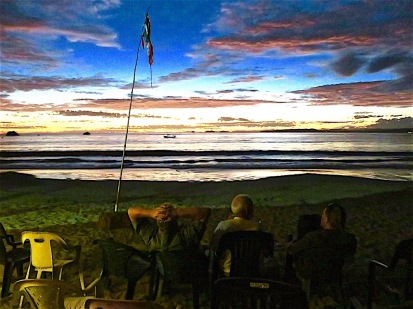 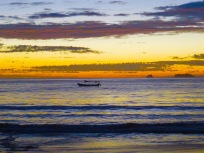 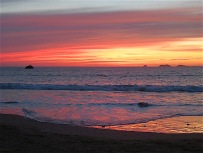 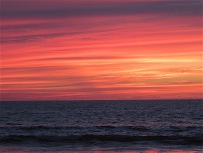 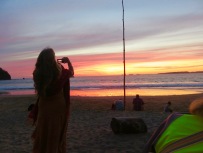 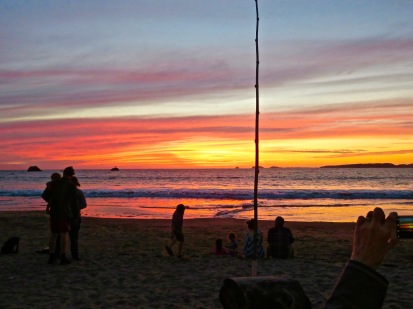 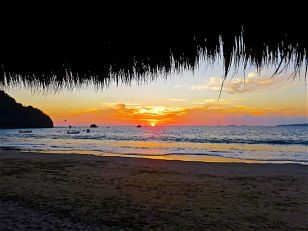 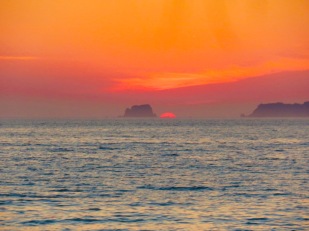 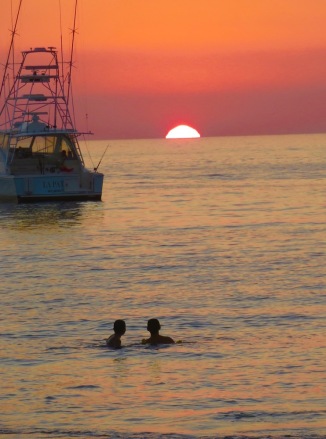 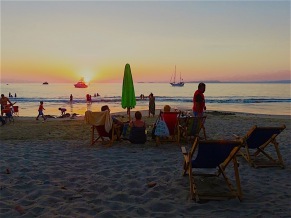 The murmuration of the waves, the breeze’s gentle rush,
the small stain of the setting sun, spread by nature’s brush.
The yellow of her pallet, bold orange and red and pink
complicate the skyline as we watch the sun’s orb sink
like a flame-red new-cast penny set upon the ledge
of that calmer ocean on the horizon’s edge.

See it slip so quickly into the ocean’s slot,
making us forget for now all that we are not.
All of life’s frustrations, all misbegotten schemes,
are flushed into the water to sink into its seams.
This is why we gather to watch the sunset’s beauty.
every single evening—as though it were a duty.

The prompt today was murmuration.

Morrie had a wonderful time on the beach yesterday with these three enthusiastic playmates and for once I had two hands free to snap photos.  And in case you wonder, no that little girl isn’t holding him by the tail!!

These are priceless, so please click on first one so you can see them all enlarged in a slideshow. Some of them made need a few seconds to come into focus.  Be patient. 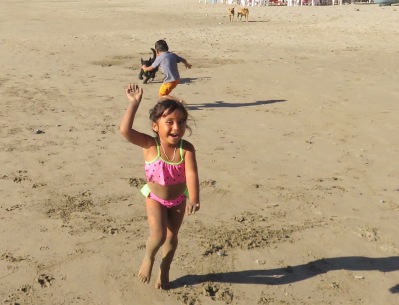 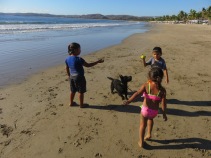 These photos are for the WordPress prompt A Good Match.

The front and back of my beach rental open onto two different worlds.  One is a world of cars, loud motorcycles, passing vendors with loudspeakers mounted on their trucks and at night, kids collecting to drink beer and blast music, other music from bars, mufflerless motorcycles and laughter.  The other opens onto a pristine beach with sea birds, fishermen, dogs, sand, an informal “beach bar” where neighbors gather each night to sip tequila and watch the sunset.  Since my beach cottage is essentially two large rooms with wide openings between and sliding glass doors and window that open onto the beach, plus another high double window that opens onto the street and that needs to be left open for ventilation, every morning I awaken to both worlds.  And this year, the additional sounds of Morrie who is ready to be let out for morning functions, to be fed and then to be taken off (with tennis ball) for another morning’s adventure. Between his basic functions and the beach walk, however, looms a matter of more importance:  THE BLOG!!! Sorry Morrie. One minute more, while I post this!

(Click on any photo to enlarge all and view gallery.)

The music I awaken to when I’m at the beach
is a symphony of sounds nearby and others out of reach.
The gentle whirring of the fans beside me and above,
and sounds outside my kitchen door that I have grown to love:
the spread out carpet of the surf, the stirring of the dog—
as I lie here on the couch, sorting out my blog.
The day can’t really start for me until I’ve shed my words.
We cannot walk upon the beach to watch the soaring birds
and throw or chase the tennis ball as we do every day
until I shake the words out and put them all away.
The subtle tapping of the keys, the gas truck passing by
outside the bedroom window with its annoying cry
of “Ze-ta, Ze-ta, Ze-ta gassssss.”
(I cannot wait for it to pass!)
Then other traffic sounds fill in
to fill the space where it has been.
One room leaks in beach sounds to tell tale after tale
of needle fish and rooster fish and tuna, snapper, sail—
my porch like a receiver that gathers all these sounds
of nature and of passers-by with which this beach abounds.
Yet the bedroom window opens onto a busy street.
I hear the passing traffic, the sound of passing feet.
Neighbor greeting neighbor and the gas truck’s bray—
all the usual street sounds of a noisy Mexican day.
The dog protests more earnestly. He’s ready for our walk.
He has no patience for this blog—its ponderings and talk.
So I save what I have written, content with what’s at hand
to wander off in other worlds of wind and surf and sand.

The prompt word today was sound.

Please enlarge photos by clicking on the first photo. 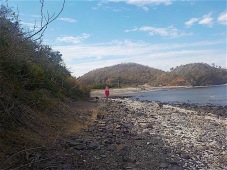 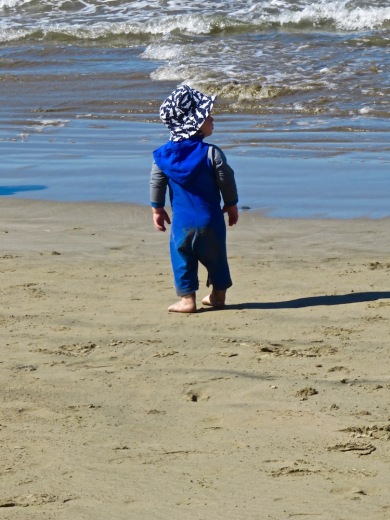 The Story of Water

(These really need to be enlarged.  Just click on them. Some might need up to 3 seconds to focus.) 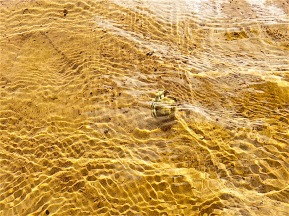 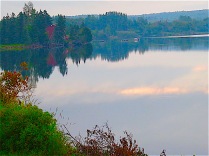 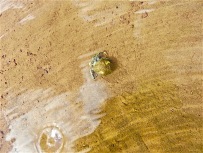 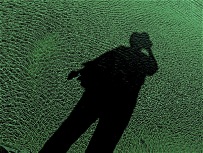 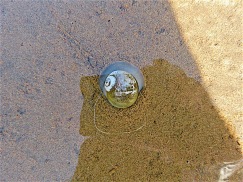 I gave nothing to the sea, so she gave nothing back.
It was as though she looked and thought, “There’s nothing that you lack.”
It’s true that I have all I need of food and friends and fun,
and yet I still lack something that’s waiting to be won.

It isn’t gained by medals, by prizes or by fame,
for it is some other thing, bereft of rank or name.
There is some magic in the world that I go looking for
that has no set place where it lives, no windowpanes or door.

I’ve found it once or twice before, in places far afield
by accident, for if you try to force it, it won’t yield.
It isn’t found at parties, a fiesta nor a fete.
If you go looking for it, the magic will abate.

It’s found in how you do things, in what manner, at what pace.
If you reach too quickly, it will vanish with no trace.
I can’t tell you how to gain it, for I fear that I don’t know.
I just know that when I found it was when I was going slow.