This was originally just written as a fast silly poem to forgottenman to explain why I hadn’t yet gone in swimming. He insisted I blog it which meant taking photos, but alas, no camera was to be found. Phone not charged. So, I used my Kindle, but couldn’t get photos mailed to myself so I emailed the pretty bad photos to him..but couldn’t reduce them enough to get them back by email. A good 45 frustrating minutes later, I went down to the studio, thinking I’d left my camera there, but alas, no camera. I did, however find my other computer that needed to be up in my house to download some things he was sending me.  I also found and killed a scorpion in the hall on my way out of the house. Back to the house to look once more in every room for my camera. Emptied my purse. No camera. Decided to go out to the garage to look in the car, I opened the front door and all 4 kittens flooded into the house. I’d forgotten to shut the gate between the front garden and the kitten domain! They immediately spread to the four corners of the house after each first going immediately to inspect the dead scorpion, which I then quickly disposed of. Finally corralled three and confined them in their sleeping room, but Kukla wasn’t to be found. Went out to garage. No camera in the car. On a hunch, I opened the back door and there it was on the floor of the backseat. It must have fallen out of my purse. Came back in, checked kittens, went out to take more photos in the back yard–of the subject of this poem–came back and heard Kukla crying, sealed in my bedroom. Let her out, tried to put her in with her peers and she ran off. She’s now purring on my lap as I type this. Photos now in the blog. Tried to put this explanation at the end but WP won’t cooperate and let me put anything below the last photo, so here we are, giving this long boring explanation when what you really want to get to is the:

Went out to dip my toe in water,
thinking that perhaps I oughter
swim if it was not too hot
or if I found that it was not
cool enough, I’d blog some more;
but just a few feet from my door,
I found two obstacles depressing,
both of them, it’s true, more pressing
than my pool aerobics were.
The first, a snag of chewed-up fur
that turned out to be a dead rat.
The second was leaf cutter ants––
determined in their chained advance.
Thousands of them in a line,
carrying leaves on which they’d dine
later in their snug abode
outside my walls, across the road.
Unless I made a quick advance,
my trees and flowers would have no chance.
“I must be strong, I can’t demur.
I must play the murderer,”
I thought as I sprinkled a line
of poison pellets on which they’d dine.
Thus did I join my canine friends
in bringing creatures to their ends.
Fate may forgive our murdering ways,
but it won’t end our murdering phase.

(Photos may be enlarged by clicking on first photo.) 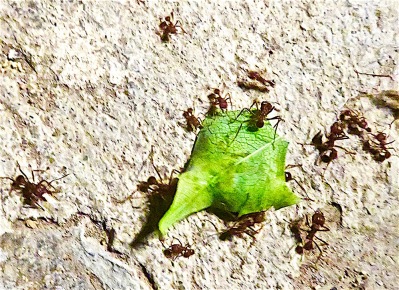 Offender #2 (and, ironically, as I type this, a hitchhiking leaf cutter ant just bit me on the neck!  Murder number three.  I hope.  I took a swat but can’t find him.  He may yet exact another revenge. 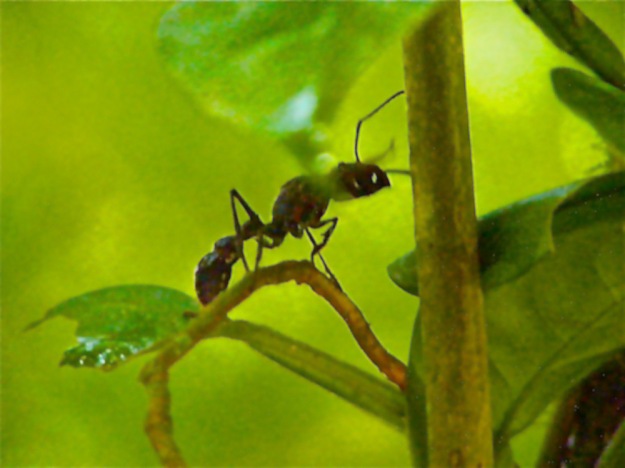 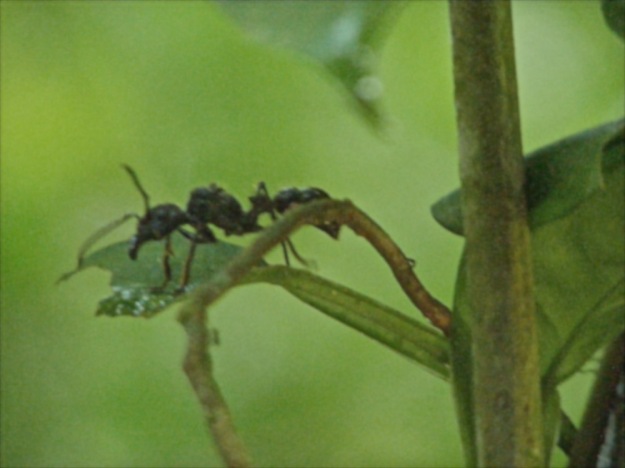 Much as I hate seeing my plants stripped of leaves and flowers, I also love watching the precision of the leaf cutter ants.  Some go up into the plants to cut leaves.  Others wait below to carry them away.  I’ll take more photos tomorrow.

As per Mandy’s request, I’m publishing these pictures.  As much as i admire the industry and organization of these fascinating creatures, it is also true that this year has been the worst in 13 years in my battle with the leaf cutter ants that have stripped my gardens time after time after time.  What used to be a once-a-year skirmish has turned into a year-round battle to try to preserve some of my greenery and flowers. 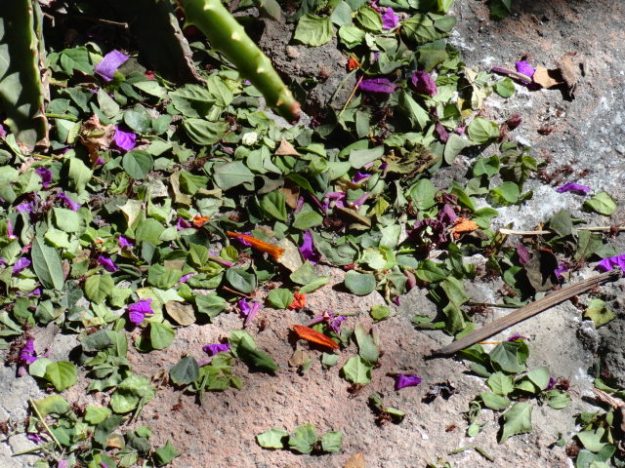 (Above:) Here you see bougainvillea, honeysuckle and hibiscus fallen to the tiny but effective jaws of the leaf cutters. This pile of leaf segments cut from the bushes above awaits transport to the nest.

(Above:) A lone ant approaches his load, walking over the chalk line.  At the time, this Chinese Chalk was  my only defense against a garden completely stripped of leaves and flowers! 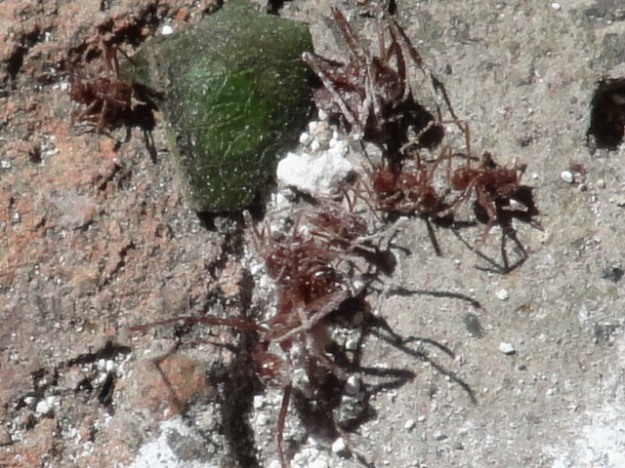 (Above:) Comrades at arms  struggle to move a leaf over the chalk line, in the process coating their bodies with the lethal “chalk.”

A lone ant vanishes into the crack in the concrete that leads to the nest.  A thin powder of the insecticide chalk can be seen on his hind quarters.

An ant struggles to move his fallen comrade back to the nest.

Too late, he himself falls.

In the end, only the remnants of the harvested leaves are left to mark their former workplace.  This round against this nest, I seem to have won; but experience has taught me that they will be back!

For a fascinating look at the devastation army ants can wreak, I recommend that you read “Leningren Vs. the Ants” by Carl Stephenson.

The Prompt: Autumn Leaves—Changing colors, dropping temperatures, pumpkin spice lattes: do these mainstays of Fall fill your heart with warmth — or with dread?

The only colored leaves I see are going to be faux,
for autumn never visits in my part of Mexico.
In fact, those piles of autumn leaves are far back in my past.
Green on the leaves in Mexico just lasts and lasts and lasts.
It’s true that each leaf everywhere must one day be defeated,
but down here where I live, the only way leaves are unseated
is not by frigid temperatures. There’s no cold to unglue them.
Our only leaf-removal means is cutter ants that chew them!
The ones who cut them down are all the bravest and the best.
Their comrades wait below to carry them all to their nest.
Their robberies completed without the slightest peep,
their piles of leaves depleted in the nighttime while we sleep.
Our guard dogs doze on soundly as ants pass by in the dark,
letting all these thieveries go on without one bark.
And so I fear that this far south no autumn colors are viewed.
Our trees create no spectacle. They go from green to nude!
And though ants harvest all our leaves—just chew them off and take them,
at least they grant us favors in that we don’t have to rake them!