The Prompt: Seat Guru—You get to plan a dinner party for 4-8 of your favorite writers/artists/musicians/other notable figures, whether dead or alive. Who do you seat next to whom in order to inspire the most fun evening?

I chose twelve guests, plus myself. The seating chart is below. You will have to imagine me sitting in the exact middle of the table shaped like a ring around me. 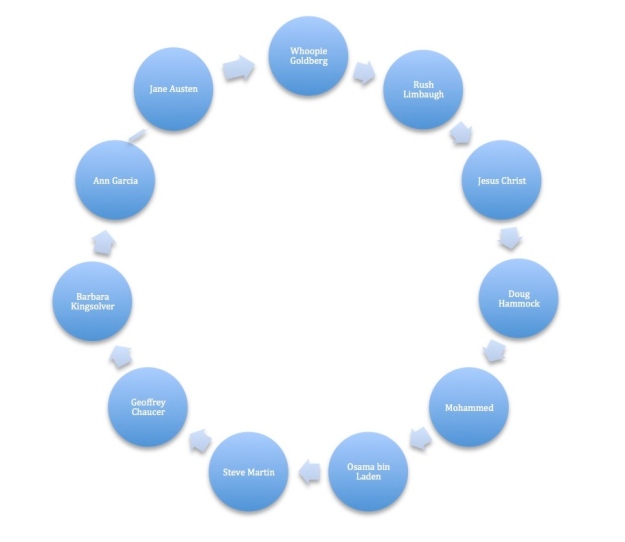 I have planned the dinner party, set the table, cooked the food,
but decisions about seating charts is ruining my mood;
for I want to sit by everyone, hear every conversation,
and trying to choose only two is causing consternation.
I think, therefore, I’d put me on a chair right in the center
on a sort of lazy Susan so I’d be able to enter
every conversation and to listen in on all,
seeing how they fare just like a fly upon the wall.

I’d have a little foot pedal to spin me at my ease—
enjoy Chaucer with my salad and Jane Austen with my cheese.
Jesus Christ and Whoopi could gang up on Rush and tell
why he’s the one who’s going to be broadcasting in Hell.
Osama bin Laden would be seated ear-to-ear
with Mohammed who would tell him what all terrorists should hear:
that the truth of the religion has got lost along the way,
for no one who is enlightened wants to kill and burn and slay.
Steve Martin would be there for fun to loosen up Osama
and spar with Rush to get his mind off Hillary and Obama.

I’d ask two people from real life to join us at the table:
Doug between the prophets so he’d finally be able
to be faced with the real men so he can sort out fact and fiction
and show it’s the religions that have caused us all the friction.
The men themselves had peace at heart and must bemoan the end
that power brokers bring the world to as their truth they bend.

The other person that I want to have here at my meal
is Ann Garcia, for I know her pleasure would be real.
Seated by Jane Austen, she would question her and tell
of her appreciation of the books she’s loved so well.
Barbara Kingsolver I’d seat upon on her other side.
She, too, would get much praise but also would have to abide
many interruptions from one listening from the middle,
for I’d be hopping back and forth like water on a griddle.

These people all are here because my curiosity
is whetted by my fantasies of what I’ll hear and see.
There is another guest that I’ve neglected to reveal,
but he is central to the plot of this illustrious meal.
Geoffrey Chaucer would be there to listen and relate
the story of this group of people that we love and hate.
So all the world could hear the tale of what we learned at table.
This earliest father of literature is surely the most able
to see the truth of character and spin a tale to tell
the truth of what will save our world from fire, brimstone, Hell!

And then, one final person I’d invite to be a guest
is Barbara Walters, who would come to interview the rest;
so we’d be sure that all received their moment in the sun,
and we could question them after her interview was done.

If you have any questions that you’d like an answer to,
most happily, I’ll ask them and pass answers on to you.
I will not mind a bit assuming this laborious task.
Just comment on this poem and say what you would like to ask
of Chaucer or of Jesus or of Whoopi or of Steve.
If they’re still here, I’ll ask them, or if they have chosen to leave,
I’ll channel them in poetry and say what I believe
they’d say if your request were one they could themselves receive.
But for now our party’s over and our guests have all departed.
Many better-fed, and (let’s hope) some more open-hearted!!!

P.S. The number of guests at my dinner party is coincidental. In no way is this poem meant to allude to another illustrious dinner of twelve plus one.

P.P.S.  Oops..Barbara Walters somehow got bounced off the seating chart.  I guess I’ll give her my seat and I’ll just roam around the perimeter, helping my sister serve the soup, but mostly just listening in and butting in. So this really should be called “Party of Thirteen.” I also had Will Rogers on my original seating plan, but he was somehow omitted.  It was my first time using the program that created the seating chart and it took me longer to get it together than to write the entire poem. Sorry Will, I’ll catch you later.  Perhaps devote an entire poem to you.