Hide and Go Seek in Paradise

Yesterday Morrie, who was lying right in front of my chair behind my heels, his nose between my feet, suddenly jumped three feet in the air.  I looked down and this lovely fellow was on the floor between my feet.  I quickly took off a shoe and bashed him three or four times, which wasn’t very effective because I had Croc sandals on, but I finally scraped him to death. Morrie licked his lips and then his paw, but didn’t keep licking and didn’t swell or cry.  Something must have happened to make him jump, but he has had no ill effects. 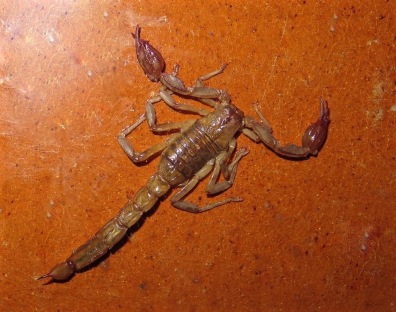 I have found five of these creatures on my bedroom or bathroom floor in the past four days!  I found two this morning alone and I think nine have met their demise by my foot in the past couple of weeks.  I don’t know what is bringing them in at this point as I hadn’t seen any for a few months.

The fellow pictured was about 2 inches long from his head to his stinger, not counting his pincers. Some are black, some reddish brown and some tan. Although the huge black ones are the scariest, supposedly the small tan ones are the most poisonous.  About six days ago I took my capris off a hook on the wall, put them on, then put on a blouse and walked into the bathroom, which is better lit than my bedroom.  I looked down and saw a twist of thread on the thigh of my capri leg and picked it off, but when I did, it moved; so I quickly dropped it onto the floor to discover it was one of the tiny beige scorpions!!!  I stomped and scraped it.  Can’t figure out why it didn’t sting me.

I’ve learned never to walk barefoot, but do occasionally.  Once in the middle of the night I neglected to put on my sandals when I went to the bathroom.  As I sat down, I felt something prick my heel and immediately shook my foot and a scorpion fell down. I felt only a slight prick and it never really burned or hurt much.  I think it had stung me on the tougher skin of my heel and just didn’t puncture it enough.

Another time a scorpion climbed between the heel of my Birkenstock and my heel as my heel raised up when I was walking.  As I rested it back down, I felt and heard a crackling noise and I investigated to find I’d cut the scorpion in two.  The front part of his body was still in my shoe under my heel whereas the stinger and rear legs were on the floor!!!

Probably my worst near miss with one of these evil creatures was when  I took my swim suit down from the shower nozzle where I had hung it to dry and for some reason shook it out (I never had before) and a scorpion fell out of the flap of material over the crotch.  Yes–Ew.  I know.  Ouch!  Now I always shake out clothes.  Well, except for my capris the other day.

Yesterday I asked Pasiano to spray for scorpions  in front of all the doors that lead into the house. So far it seems not to have kept them out, but perhaps it will slow them down long enough for me to catch them before they catch me.

Living in paradise is pretty nice, folks, but it isn’t free. Weather’s perfect, nature is gorgeous, labor and food and lodging are comparatively cheap, but oh yeah.  We have scorpions!!!