Talk about a generic name for a restaurant!

Perched on a bluff above the ocean on the coast of Jalisco near the small village of Rebalsito is “La Mosca”  which, yes, means “The Fly.”  Desecrated by Hurricane Patricia, the restaurant was reassembled from the wreckage and as I understand it has since been threatened again by the waves, which have eaten back the sand cliff up to the palapa supports.  These photos, taken in March of 2016, showed it in its second reincarnation.  After the owners (along with other residents and business owners) were thrown forcibly out of Tenacatita Beach where they had had a restaurant for years, they relocated to a place on the main highway to Puerto Vallarta, but when they did not like that location, after a few years they relocated to another beachside location, this one even more out-of-the-way than Tenacatita.

If you want to see larger photos with captions describing the cafe and explaining its somewhat unusual name, please click on the first photo and follow the arrows through the gallery.

but that led to the road

By all manner of beasts and conveyances. 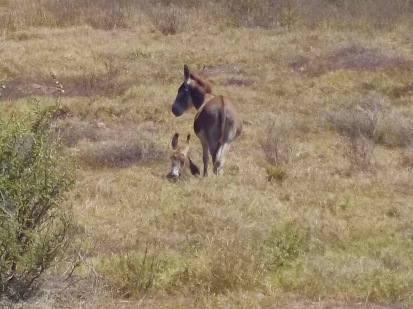 As the road changes from paved to dirt, you’ll pass a few other animals small and large along the way,

and be consoled by signs assuring you you are still on the correct path.

One of your friends in the car following you will be sure that this lovely edifice on the cliffs above is our destination, 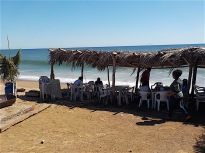 but in fact, this will be our true destination.

On a small dune above the ocean is Restaurante Mosca, created from reclaimed materials from Hurricane Patricia

such as these found in a pile next to the restaurant.

This stove top became the lintel over the door to the kitchen.

This fragment of plastic from the old roof was used to fashion an oar. 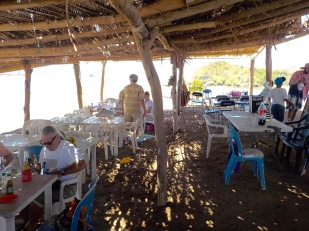 Every table has a view:

of offshore strings of pelicans undulating their course low over the waves,

of the jutting peninsula leading out towards offshore rocks. 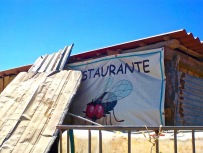 Why would a restaurant be named after the #1 insect calculated to make you not want to visit a restaurant?

For the answer to that question, I was led over to to a hammock where the father of the family lay supervising the activities of the restaurant. He pointed to a large mole on his forehead, “All of my friends, they make a big joke of slapping me on the forehead and then exclaiming, ‘La Mosca!’ (a fly!),” he explains, “and that is why when it came time to name the restaurant, we decided to name it, La Mosca.”

It is not necessary to wear a funny hat to be admitted to the restaurant, but to do so assures that your order will be taken first.

Order your fish. If it is not available, 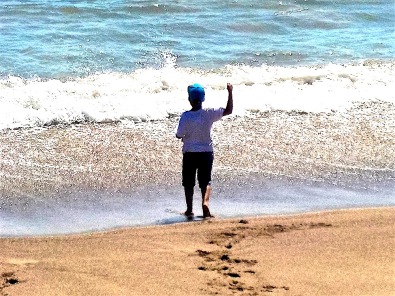 it will be in short order. 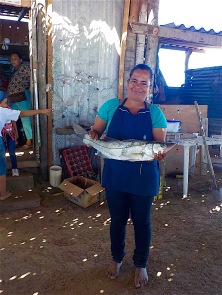 And you can be sure it will be fresh.

Just steps away is the door to the kitchen. 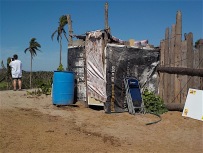 just steps away in the other direction is this edifice, and as crude as the ladies room may be, 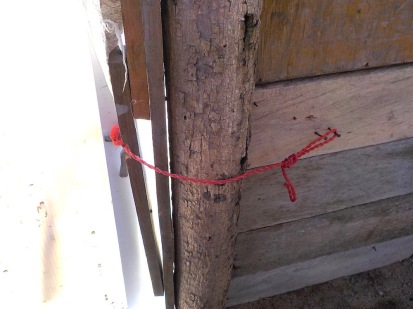 it has a lock of sorts, 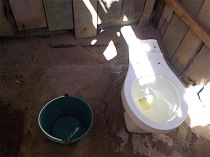 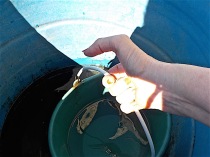 (this is how you flush,) 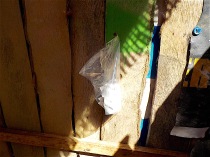 and a ready supply of toilet paper.

This is the men’s room.

A bit more public, with a shower curtain in place of a door,

but with excellent ventilation. 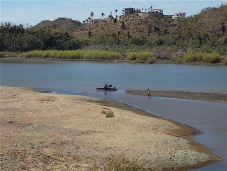 The estuary behind the restaurant affords additional recreational activity, 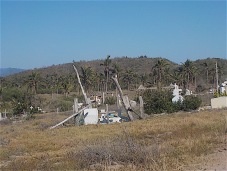 and on your way home, you get to view all of the sights you viewed on the way in again. The Pantheon, 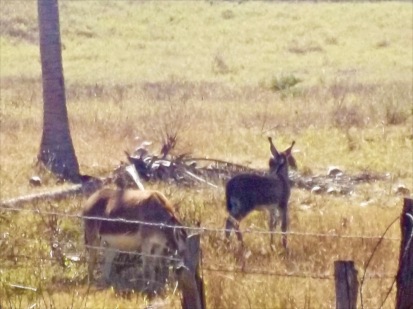 Then back past remembered animal friends,

past fields of what I think is amaranth, 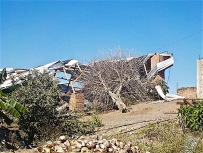 back through the little town still sporting hurricane damage, and home.

And, if you’d like to see what we did earlier in the day at Tenacatita beach, go here:

In response to The Daily Post’s writing prompt: “Take a Chance on Me.” This is by no means the biggest chance I ever took, but sometimes we should really heed that inner voice that says we should not do something.  In this case, it involved eating at a restaurant when from the beginning, I felt there was something wrong! 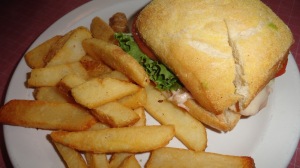 How a hamburger and fries should look!

It’s hard to believe that someone has had a presentiment of disaster after it has happened, but since I am the one who had the premonition, I’m going to remain true to myself and admit that I had a feeling of disaster the minute we walked into the restaurant. It wasn’t our first choice, or even our second, but we knew the first choice was closed and when we arrived at the second, although it seemed full of people having some kind of a meeting, the sign on the door said, “Closed.” I was all for stopping by McDonald’s for a fast hamburger, but my friend said she didn’t like fast food, so we settled on our third or fourth alternative, depending on which of us was making the choice. We opted for Uncle Zack’s.

It was a stark room with two other tables of diners and a table near the kitchen that sported a big chunk of prime rib that someone must have been carving on since lunch time, since when my friend asked if they had any rare, the owner, overhearing, came and said that they had carved away all the rare meat. Hard to believe, since one would think the rare meat would be in the middle, but I judged her to be lucky not to be eating any meat that must have been sitting there most of the afternoon. It was 5 o’clock, we were fresh out of seeing the movie “Blue Jasmine,” a bit depressed and pretty hungry for a dinner that would lift our mood.

Our adventure began when my friend asked the waiter if they could serve her a Cosmo. “Well, I don’t know what that is, but I could probably figure out how to mix you one,” he admitted, without too much enthusiasm.

My friend opted for water, unsure of whether she wanted a barman/waiter who had never heard of a Cosmo to mix her one.

“Well, to me alcohol is just something you clean out a wound with,” he admitted, as he hurried off for her water and my Diet Coke. I swear to God he said this.

They arrived in tall glasses with plenty of ice and a lemon slice. Her water was fine .   My Coke was flat and tasted of disinfectant.

When the waiter came back for our orders, my friend was unsure of what she wanted to order. I told the waiter about the Diet Coke and asked for a glass of water and a hamburger, well-done with fries.

A very very very long time later, our waiter returned, apologizing by saying he had been attending to my last complaint. By that I took it that they were washing the disinfectant off the soda dispenser and aerating it, yet he offered me no new glass of Coke, and I had no intention of ordering another one.

My friend asked if the turkey Reuben was fresh turkey or luncheon meat. After a trip to the kitchen, he admitted it was luncheon meat but then in a flash of inspiration, admitted they might be able to use the turkey they were cutting off the same steam table that contained the bones of the Prime Rib.

In the interim between the time we ordered and the time we finally got our meals, I experienced a few additional sights that made me regret our decision to eat with Uncle Zack. The first was the sight of the other waiter picking pieces off the prime rib and eating them. The other was the sight of him scratching his nostril soon after and making no hasty exit to the sink to wash his hands.

I knew if I mentioned this to my friend, that we would be out of there. He was not our waiter, we hadn’t ordered the prime rib, so I remained mute. It was her hometown. I didn’t want to embarrass her, and to be truthful, I didn’t want to embarrass myself by appearing to be a difficult customer. Hindsight. Only in hindsight did I gain the knowledge that we should have left then.

Our meals arrived some time later. I bit into a fry enthusiastically, only to discover that it was soggy on the outside, raw on the inside. When I commented, my friend slid the only crisp French Fry out of the stack and pronounced it fine. I then handed her one of the limp others, which she agreed was still raw. I bit into the hamburger, which sort of rebounded off my teeth. It was the consistency of rubber—slightly resistant to chewing. When I tried to cut it, I had to saw at it as thought I was trying to slice a rubber ball. I took a bite. Tasteless. I cut it in half horizontally, thinking it might help and that I could at least eat the cheese and bacon, but they were equally tasteless.

My friend ate most of her Reuben, which she pronounced as tasteless as the hamburger, if not as difficult to masticate.

At the end of our meal, the young man waiter asked if I wanted a doggy bag for my hamburger and fries. No. I did not. When he brought the check, he asked if we had enjoyed our meals. No. We had not. I suggested that he instruct the cook to actually cook the fries and that the hamburger had a rubber consistency reminiscent of meat left in the freezer too long. “Oh,” he said.

“I’m now going to McDonald’s to get a real hamburger and fries” I said. We paid the bill, left a 20 % tip to let him know we weren’t just trying to stiff the establishment and the waiter, and drove to McDonald’s, where in place of an order of fries (I was totally “off” hamburgers at that point) and a Diet Coke, we were served a regular Coke and a Diet Coke instead.

As we sat at the drive-up window waiting for our correct order, my friend told me that when the people in the booth next to us were served their prime rib, she heard the waiter apologize and say, “The next time you come, we’ll give you a bigger serving. We sorta ran out of prime rib tonight.” Will they be back? Will we?

Note: The name of the restaurant has been changed to protect the guilty.  Perhaps it was just an off-day?

Abba – Take A Chance On Me