Not the same flower as a few days ago, but possibly the same wasp.

Don’t miss this flower on Cee’s blog:  Beautiful and Weird!

Well, the story of the wasps continues.  After considering all angles, I decided that since the wasp nest was getting big enough to interfere with the barred gate outside the kitchen door, that it would have to come down eventually and better to do it now so they could get started on their next home.

I wanted, however, a method of removal that would harm neither wasp nor Pasiano, who had volunteered to do the chore.  Through research, I learned that the best time to do it was early morning or evening.  Pasiano said he would be here today to do the job.  Of course, I forgot, so he surprised me in my nightgown, feeding the dogs right outside the kitchen door.  I went to get a robe and returned not only more clothed, but also with some vital coverup gear to protect him.  Bob’s old welder’s mask and a jacket with elastic at the wrists were musts.  We completed his ensemble with rubber gloves and one of my favorite scarves.

He was a good sport and donned them all, but had a bit of a laughing fit and had to remove the helmet/mask until he could catch his breath. 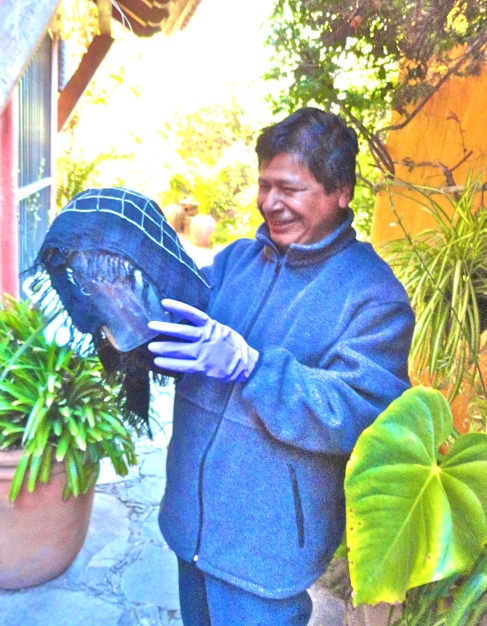 He showed me his solution to wasp removal–a hard plastic icecream container in a plastic bag.  He would put the container over the nest, scrape the nest off the wall and quickly close the plastic bag over it and carry the entire nest, wasps intact, down to the spare lot below me. 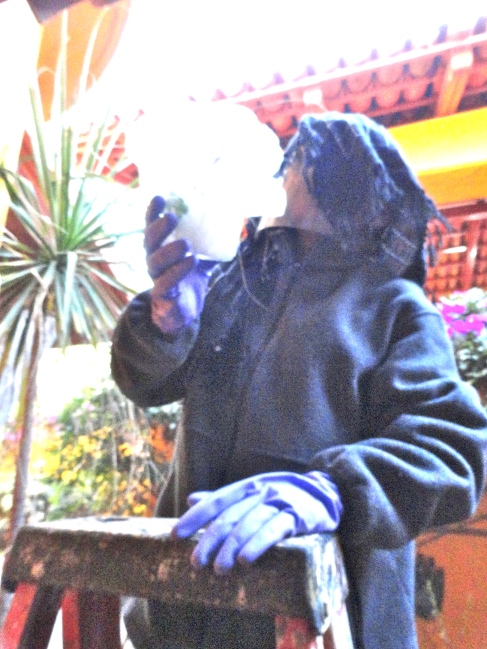 The nest was quiet, with wasps clustered around on its surface.  None had yet stirred.  He climbed up on the ladder.  I watched from behind the glass door. The maneuver easily executed, he held the bag closed in one hand as he stripped off his battle gear. Not one fatality.  Not one sting. 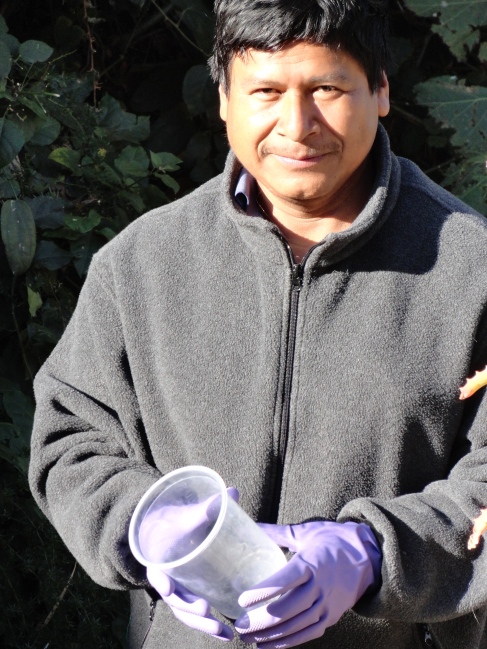 When he returned from the spare lot, he took the side of the ice cream container and scraped the residue of the nest off the wall.  Three tenacious black wasps remained–two still clinging to the residue from the nest, the other buzzing through the air a short distance away.

Before I knew what he was about to do, Pasiano squashed the two remaining wasps with his fingers.  The other flew away.  So, our maneuver was blemished, as oftentimes happens in warfare.

And I was left to put away the battle gear 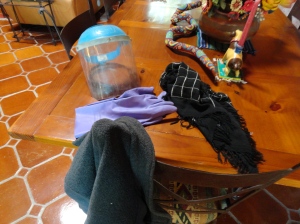 and to tell the tale.