“I don’t know what to make of ping,”
he told me, simply answering
my question of the difference
and, in truth, my inference
that he would know the answer and
as usual would take a hand
in clarifying one time more
what a speed test measures for
and what they had to do with “ping”
and downloading and uploading
and whether one point twenty three
was enough download for me
and whether zero point six seven
would get me into upload heaven
and what this ping stuff had to do
with starts and stops that ruined my view
of films that I had hoped to stream
that only made me want to scream

because they came in fits and starts,
ruining all my favorite parts!
Are they adequate, I asked?
His scorn was only partly masked
as he admitted they weren’t at all.
“And ping?” I asked him this last thing.
and he was quick in answering,
“I don’t know what to make of ping,”

These numbers are the actual,
although they aren’t the factual
upload feeds
nor download speeds,
for I forgot to disconnect
the VPN and so I wrecked
results of loading speed and ping,
but I was apt in my rhyming

which only goes to show a poet
is not a techie, so now you knowet! 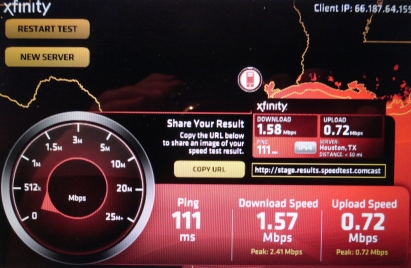 (This is the actual result of my speed test after I turned off the VPN.)