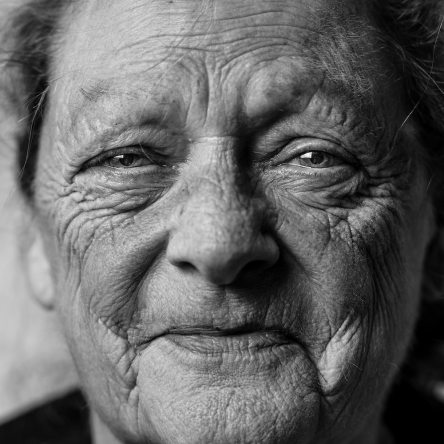 If you must go on an escapade, be sure to take umbrellas.
Do not talk to strangers and do not flirt with fellas.
Why put on all that makeup? Your natural look is best.
Why would you wear a bustier when you could wear a vest?

Pick locales you know are safe. Just go to ones near churches.
Beware of stuff that falls from planes and pigeons on tall perches.
You may think your gallivanting is the stuff of dreams,
but the world of adventure is not all that it seems.

Why not choose daylight hours to see what you can see
and once the sun sets, stay at home, here with gramps and me?
I’ll make a pan of fudge and then we can play Parcheesi.
This town’s not nice at night. It’s very dark and way too breezy.

But if you simply must go out, mind the bottom stair.
Is that funny little outfit the one you’re going to wear?
Put toilet paper on the seat when you use the loo!
A key? Oh, you won’t need one.  We’ll be waiting up for you.

When he wasn’t ranching or farming or drinking coffee in Mack’s Cafe, this is where my father could normally be found.

At the Amana Colonies on a visit to my sister who was attending Cornell College in Iowa. As you can see, my father cleaned up well. 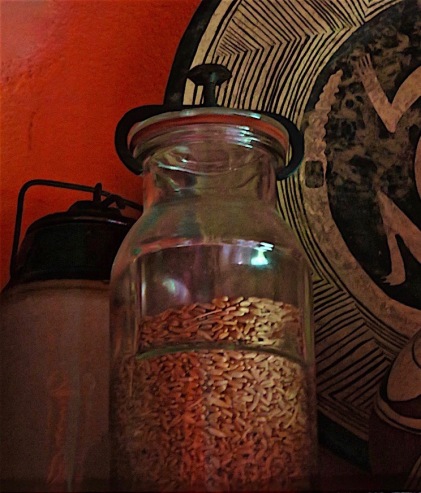 The wheat shown above and in this jar was collected by my oldest sister from the last wheat crop before we sold the ranch. I brought it with me to Mexico, where it sits over the cabinets in the kitchen.

(To get a larger view of photos and to read captions, please click on first photo and arrows. To get back to read the essay, click on X at upper left of photo screen.)

A stalk of it usually extended from between his teeth when he was out inspecting a field come June or July. It collected in his pants cuffs and in the hat band of his broad-brimmed work hat.  Bags of it wintered in a huge pile that filled our garage one year when there had been a good crop and all the barns and silos were full to bursting. The cars stood outside in the gravel driveway just off the alley and behind the garage that winter and our house was strangely empty of mice as they took shelter in the garage instead. Our outside cat grew fat even though he rarely came to the back door to be fed.

Ours was a little ecological system all its own.  Mice feasted on  grain spilled from burst seams in the garage. The cat feasted on the mice and we feasted on the steaks of Black Angus cattle who had eaten the ensilage from wheat stripped of its grains.

If I have always worked hard to furnish the bread and butter of my life, it is wheat that has furnished the dessert–my college education, my first car and, after my dad died and I inherited 1/6 interest in the farm and ranch, my first house.

Our lives were run by wheat and cattle.  During the summer, no time for family vacations. Wheat and cattle were my dad’s alarm clock. He rose before sunrise every morning and was often asleep in his chair before sunset, wheat spilling out of his pants cuffs or high top boots or stuck by the hooked spines of its beards to the fabric footstool in front of his rocker.

He slept hard, my father, and rose early to insure everything worked to the cycle of the nature that had surrounded him from the time, as a three-year-old boy, he had stepped off the Union Pacific train that had brought him and his mother to the little South Dakota town both he and later I grew up in. As they descended the metal steps, my grandmother had held one hand down to grasp the hand of my three-year-old father. The other was extended upward, holding a cage with two canaries. My grandfather and teenaged aunts were there to greet him and my grandmother, who, even though she had been the one who decreed that they should leave their safe security in Iowa to claim a homestead on the Dakota prairie,  had not traveled by wagon, but instead had sent her young girls and husband on ahead to prepare a way for her and her youngest.

My grandfather––a Dutch immigrant who was not a farmer, but rather a baker better suited for working with wheat in its miled state––did what most people did when my grandmother issued demands.  He complied.  It made for a hard life for them all–fighting the harsh South Dakota winters out on the plains as well as prairie fires, plagues of grasshoppers and schizophrenic weather that could furnish either drought, unseasonal rain or hail–all of which could ruin a wheat crop. So that later, when I asked my dad why he never frequented the games parlor where the other men played poker and lofted a beer or two, he said that he had no need for games of chance. His whole life as a rancher and farmer had been the biggest gamble of all.

My grandparents never did learn the correct formula, but my father, surrounded by the prairie from age three to seventy, learned its secrets well. Enough to buy out his parents as well as others who tried and failed. Enough to ensure the comfort of his wife and children and his grandchildren. Enough to die at what, now that I am nearly  69,  seems like the young age of 70.

Year after year, as he tilled the rich South Dakota soil to plant the grains of wheat he’d saved to seed a new crop––he seeded my life as well, along with that of my mother, my sisters, my nieces and nephews–all of our lives growing and prospering from those millions of shafts of grain that he planted and watched over and harvested and stored and replanted over a period  of fifty years.

The WordPress prompt today was “Grain.”