The word is out that Geoffrey Chaucer
never bothered with a saucer,
for though he raised many a couplet,
he always held them fully uplet!

Some have charged Truman Capote
with writing that is too emotey.
but though he was no macho stud,
I know that he wrote in cold blood.

The prompt today was to write a clerihew. A clerihew has the following properties:

Clerihews are not satirical or abusive, but they target famous individuals and reposition them in an absurd, anachronistic or commonplace setting, often giving them an over-simplified and slightly garbled description (not unlike the schoolboy style of 1066 and All That). The unbalanced and unpolished poetic meter and line length parody the limerick, and the clerihew in form also parodies the eulogy.

Stopping by Friends Enroute to California

Whose house this is I surely know.
I’m sleeping on their sofa, though
And did not see that table there
And so I stubbed my little toe.

Their monstrous dog must think it queer
To find a stranger sleeping near
And yet no fuss he seems to make.
Golden retrievers are most dear.

He gives his collar tags a shake
To ask if there is some mistake
And wakens me from where I sleep–
A task that is a piece of cake.

The morning’s early, dark and deep,
But now I won’t return to sleep,
for I have schedules to keep
And miles to drive before more sleep.

The NaPoWriMo Prompt: Write a parody of a famous poem.

I know what I saw.
My mother-in-law
may nay and naw,
may hem and haw,
lay down the law,
fight tooth and claw;
but I won’t thaw
to her cronish caw.
I’m feeling raw.
I’ve set my jaw.
I know what I saw! 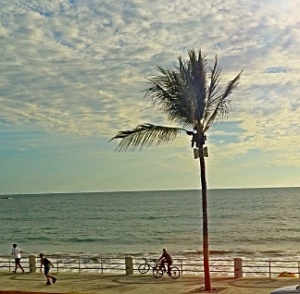 and drinking a Rum and Coke

and concocting my NaPoWriMo poem for the day.  (Today’s Prompt: write a poem that states the things you know. The things you “know” of course, might be facts, or they might be a little bit more like beliefs.) Now…on to dinner and a swim.  See you tomorrow!!!!