Since he’s not known for abnegating,
there’s no chance he’s abdicating
even for our nation’s good,
although how much we wish he would!

We’d hold a giant jubilee—
you in your house, me with me
in light of social distancing,
the protests and the rioting.

He could finally be the hero,
send stress levels down to zero
if (oh if) he’d only switch
his playground to the very rich

and leave real world decisions to
those others who know how to do!
The whole world could cease its grieving
as he fixated on his thieving

and left the running of the earth
to folks of greater moral worth,
more intellect and common sense.
(But, hopefully, not Michael Pence.)

Prompts today are “for our good,” thief, jubilee, abnegate and stress. Image by Christian Lue on Unsplash, used with permission.

I’ve been getting a bloom a day on this new hibiscus. Today it looks like mother and child.  Click on photos to enlarge views.

I thought I’d published this before but can’t find it. I’m thinking this is the mood my usually loving and docile cats were in when they wreaked havoc on my house last night or early this morning.

It’s Sunday, and the only day of the week where I don’t have a minimum of three men here working. I should have known when one of the cats woke me up by biting my toe. I’d spent a night of sleep with no disturbances. No leg or foot cramps, no trips to the bathroom, no shortness of breath where I had to get up and sit up on the divan all night to breathe, as had happened Friday night. I got up to let them out and on my way back to bed, I noticed the goose down pillow I’d left on the couch during my last sleepless night. It was soaking wet! All the way through! It had rained the night before and I wondered if the dome skylight was leaking once again, but when I got within a foot of it, I could smell the rank stench of cat urine!!!! This had happened only once before in my 19 years of living with cats in Mexico and I had attributed it to Annie’s age when I came out one morning and found my $1,000 artisan quilt soaked in urine. But now that Annie is gone, her reputation is expunged. It was one of the young cats who was responsible. That does it. No more cats in the house!!!

My problems, however, were just beginning. The entrance to my laundry room is on the outside of my house, so I unlocked my bedroom door, opened the outside gate, tried to unlock the laundry room door, and no go! The door has a double lock—a regular one plus a deadbolt. Someone had not fastened the latches that hold the double doors in place, and when those latches are not shut, there is no way to get the deadbolt open! In the past, I’d had to call a locksmith to get the door open when Yolanda had neglected to fasten the manual bar latches, but it was Sunday and my arms were full of a urine-soaked down pillow—my favorite, I may add.

Back to the house and the shower, where I stripped two pillowcases off (so that’s where the matching pillowcase has been all these months) and began the job of soaking, expunging the air, soaping, wetting.  I rinsed out the pillow slips again and again in the sink under running water as the drain plug doesn’t close. (Another story.) Then, I started pouring white vinegar, as unfortunately the animal urine remover was in the locked laundry room.

The pillow, which I had soaked in a huge metal bowl in the shower, was now inflated to the size of a balloon and I realized there was no way I was going to get this dealt with without a washer and dryer, so I called Pasiano, who lives just two blocks away. He is the solver of most of my household problems and might know the secret of the locked laundry room. Often he goes to Guadalajara on weekends to visit family, but I was in luck. No, he wasn’t at home, but he was in San Juan Cosala, a small nearby village, and he’d be here in 15 minutes.

Long story short, he arrived, the pillow cases and pillow are in the washer on long cycle, and I am about to check out the leather sofa. I detect no odors, but when I bend over to check, I see the rainforest frog hand-fashioned of raw latex that normally sits on the coffee table in front of the divan on the floor along with a Oaxacan  handwoven mat it usually sat on. Obviously, the cats had staged one of their marathon chases before one celebrated by peeing on my favorite pillow!

It was on my trip back out to set the pillow and cases for their second cycle that I noticed first the bobble-head figure, formerly in a row on a shelf above the bed, lying on the floor on top of the scrunched-up Oaxacan carpet. Now minus one leg, it lay where it had come to rest after what I can imagine was a soccer match between the cats. I pick it up and restore the other bobble-heads to their former order, but this little bull will not march again until I provide the necessary prosthetic. I unlock the bedroom door and move out to the patio, where I for the first time notice the wall that the young man who repaired my  broken pipe had re-concreted.  He had done a horrible job. The natural curve of the wall had not been followed, the concrete was messy and unsmooth, and it generally looked like the job of an amateur. My contractor had promised to come out the day before and inspect the work of the young man but he’d let me down for the second time. He assures me it won’t be too late to redo the work on Monday and that he’ll send a different man, but hard for me to accept that concrete won’t be easier to remove 24 hours after it has been put in place than 48 hours.  I’d go down to the hammock to console myself in nature, but unfortunately, my hammock ripped down the middle yesterday. The cats are yowling indignantly at the door to be let in. Nope. Not my day.
This is perhaps the mood they were in when they created the damage below: 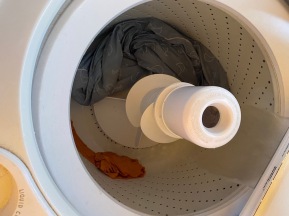 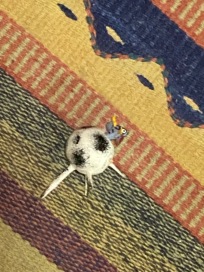 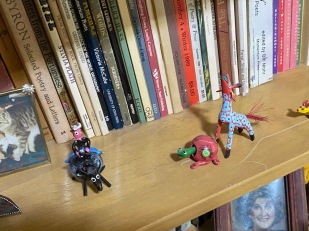 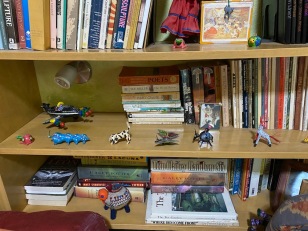 For Lens-Artist Challenge 99 Old and New 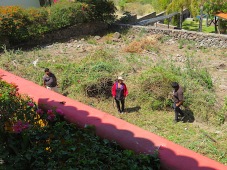 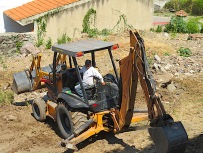 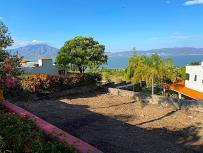 Outdoors is bright and sunny. The rain has ceased its patter.
The pecking birds are pecking and the chattering birds chatter.
Butterflies stage a homecoming around the tabachine
announcing the retirement of the big machine
that worked the big lot next to me with giant rolling claws,
For eight long hours, it it scooped and scraped without a single pause.
It trounced the giant boulders and put them in their place,
crushed the weeds and tree limbs, leaving not a trace
of all the weeds and rubble, the stones and the debris,
burying it within the earth so we cannot see
all the ugliness of nineteen years’ accumulation.
of our neighborhood’s detritus, so here’s a small ovation.
What new event will crown this lot? What may be coming next?
I guess you’ll have to read about it in upcoming text.

I finally got my lot next door cleared of all the debris neighbors have been piling on it for 19 years. Wish I’d gotten a better photo of the “before,” but here are a a few Johnny-come-lately shots.

One of my new hibiscus plants seems to like its new location. Although the plant is small and only a week old, it has already produce four blooms. These twins popped out the day before yesterday and look at all the buds that are getting ready to produce more blooms! They are the size of my hand with the fingers completely spread out.

I’m not telling. You need to guess.

For Friday Fun. What is it?

I’ve been outside so much during this Shelter in Place period that I’ve been seeing lots of birds. I think Granny’s Bird of the Day prompt has ended so I’m just going to do my own private bird of the day for awhile. If anyone else wants to do so and link to it, just do so in comments. My friend Paul Hart, an avid birdwatcher and genius photographer, identified this for me. 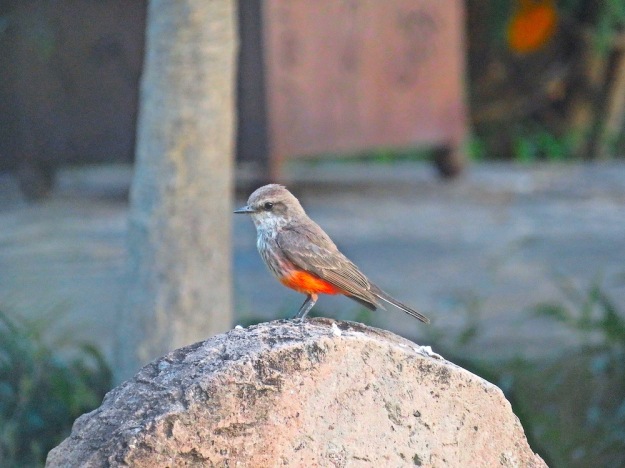