Helpless:
Scene Viewed Through the Locked Glass Front Door of the Kitchen

There’s insurgent action at the rear kitchen door.
First one unrepentant rebel and now I see one more.
My houseguests didn’t secure the periphery completely
and now one paw has breached the screen and opened it completely!
A dog’s whole avarice is culinary. Now they seek it out.
That pork roast on the counter? Gone without a doubt!
That carrot cake I cherished? Demolished in a flash.
The potato salad vanishes. And now a furry dash.
They depart the opened doorway and soon they’re over yonder.
Their tummies adequately filled, I think they do not ponder
what the rest of us will dine on. Dogs are not endowed with guilt.
Should have factored in housebreakers when that sliding door was built!

Morrie Takes off and Brings the Road Home with Him!!!!

It’s true.  When Pepe came to give me my massage today, he opened the door and all three dogs ran out!  After two months of never escaping when the construction guys were in and out dozens of times a day, suddenly they asserted themselves and were long gone–not a whisper of a tailfeather was in view in any direction by the time I got out in the street to call for them.  I didn’t know whether to fear that they’d gone up the mountain or to be glad.  No cars up there and fewer dogs than in the streets.  So, nothing to be done. I decided to leave them alone ’til they came home, wagging their tails behind them.  An hour and a half later, that’s what they did.  The first two to enter were fine, but this is what I saw when Morrie entered! 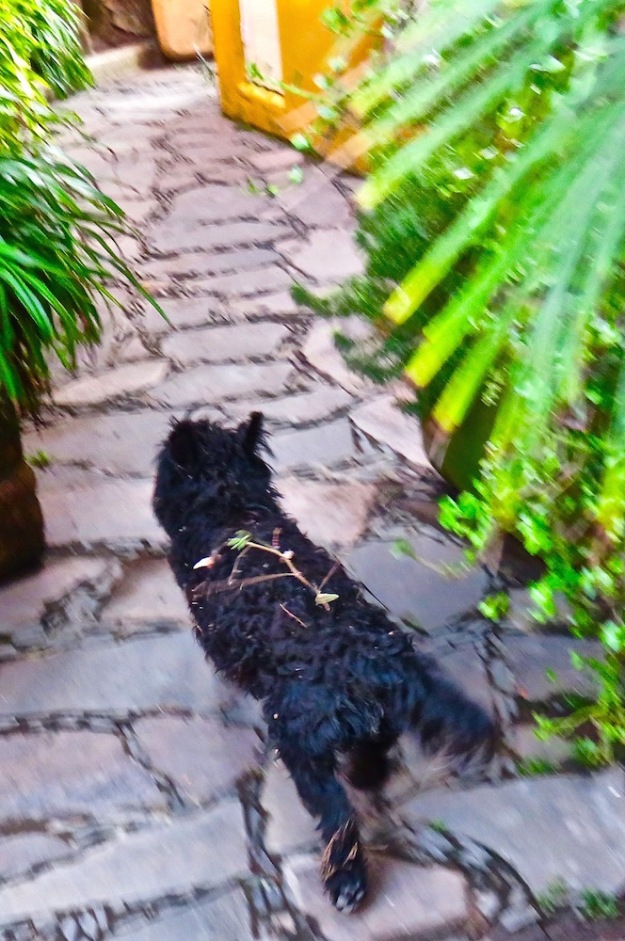 First thing he did was make right for the water bowl.

A one-and-a-half-hour run in the mountains sure makes a Laird thirsty!!!

I couldn’t help but notice the splint-like accumulation on his leg.

not to mention the sizeable limb of some sticky weed, complete with tiny tenacious bristles all over it and flower abloom. 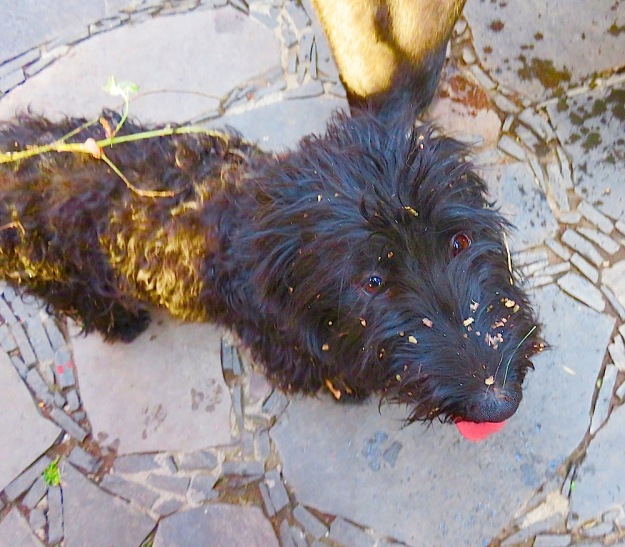 Oh yes, those little decorations all over his head were sticky as well, and had no desire to be shed.

The “limb” looked like a sunbather using Morrie’s coat to  attract the sun’s rays–a sort of solar hothouse!

Ah, Morrie.  Always a new thrill.  I got the limb off, in pieces, before he took off to tussle with Diego.  When I fed them, I got a few more pieces removed, then noticed that some scraped off as Diego and Morrie rolled and growled and wrestled and did their usual hi-jinx.  I went back to party preparations.  (Pictures to follow.)

I have neglected to say that the doggie domain is almost finished. Today they primed the walls and they reflect so much light into the hall now that I’m tempted to leave the walls white.  Dare I?  It looks beautiful, even in the chalky transluscent white of the primer.  I put the fridge in and the two cages with beds inside and Frida’s bed which almost entirely take up all the floor room.  I left the outside door to it open and a half hour ago, heard noises and went in to find Diego in Frida’s bed and Morrie in Diego’s bed in Diego’s cage! I couldn’t persuade them to switch back to their own bunks, so we’ll see what happens when Frida comes in. No lights connected, so I can’t take a picture!  Perhaps I’ll try with flash.

Happy Thanksgiving!  Tomorrow before the guests come, I plan to put Diego in the doggie domain, Morrie (and his bed) in the little dog run outside the spare bedroom and Frida in the garage with her bed while the guests are here.  One guest asked if she could bring her dog and I said I thought there would be pandemonium enough with my three.

One episode follows too quickly on the heels of another. I’m going to let the pictures speak for themselves.

Yes, he opened the drawer.  Yes, he ate the drawer knob, and the TV antenna connection, and the books, and the crayons!!!  No, I didn’t ever think he could get a drawer open.

Yes, I have removed the drawers from the room now.  Yes, I feed this dog.  No, I can’t spend every moment with him.  Yes, at least he didn’t eat the second box of crayons.

Yes, he’s sleeping here beside me as I type this. Yes, his stomach is growling.

Some Scottie parents continue to underestimate their kids, in spite of what Marilyn and Garry tell them.

Too soon old, too late smart!!!

Yes, this is a new picture of Morrie looking guilty!  I should have known when he was in his cage when I entered the room and when he didn’t start clamoring to be let out of his room the minute I got home.  I need a theme song similar to Jaws to start playing when I enter my house!!!