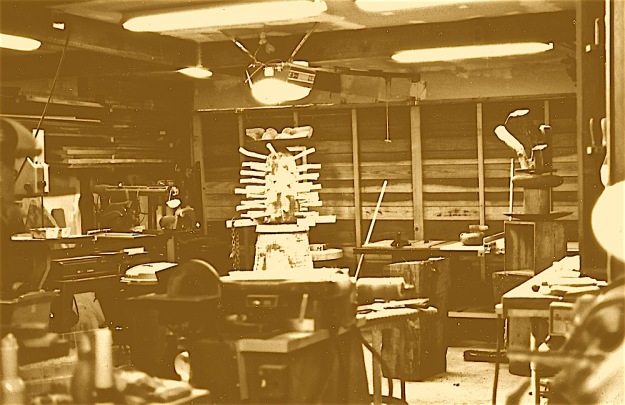 My memories
are footsteps
leading me to you.

I smell your scent of wood,
your sweat with the bouquet of bronze,
remember the finger you sacrificed
to impetuosity and art.

Finally the world fed all of you to the blade––
our severance as final as one of your straight sure cuts––
making you into memory I follow one step at a time,
my passing visible through stone dust
and wood shavings on the floor.

stone chips, sawdust, pebbled glass,
curls of metal and winged shards of paper––
my footprints
pushing them farther apart
each time I pass through.
Leaving more of me
and less of you.

You would think there would be some remnant left,
but death was simple.
You were there and then you weren’t.
After one deep ragged breath
you were so gone that even your body
seemed to miss you.  That stillness
so irrevocable. So not right.

Our friends all came
to see the place where you had been,
bringing offerings
to fill the void.
It was a full-packed house–
your sons, their wives, your daughter–
eight of us filling out every hollow corner.

I slept in the bed meant for two,
trying to convince myself I was enough–
trying to fill in the space you left.
That empty cup.

The Prompt:  Cut Off–When was the last time you felt completely, truly lonely?

The prompt: Open your nearest book to page 82. Take the third full sentence on the page, and work it into a post somehow. (The book nearest to me and its quote is given below:)

What happens to someone like her as she gets older?
–from Luck, by Joan Barfoot

She loses her balance, starts to fall.
Once in the kitchen, three times in the hall.
Finds it harder to remember, spends more time alone.
Speaks her mind more freely, less likely to atone.
She starts attracting cats that come inside and do not leave.
Wears frays in her clothing–hemline, neckline, sleeve.
Starts forgetting passwords–sometimes the names of friends.
Her search for keys and glasses never really ends.
Starts waking in the nighttime to contemplate her death.
At midnight, has to go outside to try to catch her breath.
Counts the years before her instead of those behind.
She could live to one hundred if fate is being kind.

Will she live her last years with sister, lover, friend;
or will animal companions help her meet her end?
Will anybody mourn her? Does she want them to?
Will she be remembered by a poem or two?
Will anybody read her after she is dead?
Will all her future poetry die here in her head?
Will her blog named “lifelessons” finally cease to be?
Will they give the name away for a modest fee?
Will they erase her blog spot, burn her files of poems?
Cause a glut on EBay of her leftover tomes?
If she sells a book or two every other year
where will Amazon send the money when she isn’t here?

One day in the future in three thousand two
will Zee, (some bored teenager, with nothing else to do)
go onto the internet connected to her head,
close her eyes and throw herself backwards on her bed
and stumble on an errant line that floats through cyberspace,
and Google it to try to find its author, time and place?
“What happens to someone . . . ?” are the words that Zee has found.
Her fingers start to twitch as she is driven to expound.
The printer prints the words she says without her further action.
Tied into her speech and thought–spontaneous reaction.
” . . . like her as she gets older?” is printed on the wall.
For there’s no paper in the world. No paper left at all!
Her face is flushed, her eyes dilate, her eyes first squint, then blink.
This random line floating in space has provoked her to think.
First she’ll finish cyber school, then link her living pod
with a blowout sort of guy with a gorgeous bod.
They’ll make links with other blogs and party with their friends
for a couple hundred years before they meet their ends.
She thinks back on the interbrain to look for thoughts and links.
Lets her mind go soft as into cybermind she sinks.
Looking for her future job. She knows it’s there to see.
Time being just a concept to wander through for free.
She plops onto a webpage from two thousand fifteen,
all the information still there and easily seen.
The line Zee thought jumps out at her. She sees it’s not her own.
It’s been used two times before and now it seems it’s flown
into her thoughts to sort her out and give her a direction.
As she reads on, she catches on to this writer’s inflection
in every word she writes and when she gets to the post’s end,
she goes on reading through her life and starts to make a friend.
After two days of reading, she winds up at the start
knowing every detail in this blogger’s heart.
Then she goes back to where she started and sees her doubts and fears.
It’s then that she fast-forwards to the blogger’s final years
and sees the truth of everything that’s going to transpire.
The failing health, the hopeful mood, the ad, “Wanted to Hire
an interesting friend to talk to while I fall asleep.
One capable of caring and thoughts that wander deep.
Someone to be there some nights when it seems that I might leave
for one last time this life that’s loosening its warp and weave.
No heavy lifting needed–a weighted thought or two
is all that I find necessary. Weighing thoughts will do.”

Zee zoomed back to the entry that had drawn her thoughts at first.
The very sentence that had caused her gloomy thoughts to burst.
January was the month and 14 was the day
The year 2015, when she’d been second to say
those fateful words and now Zee, too, was thinking just the same–
moving to the comments to add her words and name.
“Dear Lifelessons,” she’d say to her, and then add her assurance
that everafter she would be her safety and insurance.
That she would never die alone or be bereft of friend
for Zee was vowing here and now she’d be there at the end.
She’d looked ahead and so she knew that she would keep this pledge.
She’d known the center of this life and now she knew its edge.
She knew the dates that she’d be needed in the years ahead.
She made a list and filed it in a clear spot in her head.
And then she went on thinking what those words meant in her life.
Would she be a scholar, an actress and a wife?
Would she produce children and would they be there for her?
That sentence found in cyberspace created quite a stir.
But all her dreams it prompted came true enough, what’s more
she kept her date with Lifelessons in 2054. 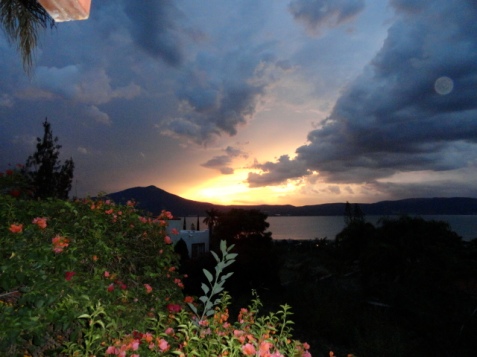 In response to The Daily Post’s writing prompt: “Connect the Dots.”