Cropped or uncropped?  Which do you prefer?

Gary at Plant Care Today sent me this link to his site that tells about Heliconia and their care: https://plantcaretoday.com/heliconia-plant-care.html

Substandard in My Dotage

My body is substandard, defective, under par.
It does okay for walking if I don’t walk very far,
but at jogging mile after mile I would not be my best.
My left knee hath a hitch in it and so it doth protest.

And as for aesthetics, it takes no art detective
to discover all the many ways that I am  defective.
My skin is pale and blotchy and will not stay in place.
It sags here on my underarms and here below my face.

My fingernails are ridgy, my toes starting to curl.
Everything is different from when I was a girl.
And though I have less hair now in places where it’s been,
When I go in search of it, I find it on my chin.

Gravity has claimed those spots where once I was most perky.
That neck so firm and regal now resembles most a turkey.
The pounds that all my life I have been struggling to lose,
as by magnetism have settled where they choose.

Some ladies age most gracefully. I fear I am not one.
Of all the charms of aging I’ve not captured even one.
So I guess I’ll just dress funny with a little flair.
Put shadow on my eyelids and feathers in my hair.

I’ll jangle all my bracelets and put on all my rings.
I’ll give away old lady clothes and wear more stylish things.
At least I’ll finish my last yard with a little dash.
What I lack in all the rest I’ll make up with panache.

Substandard is the prompt word today. Photo borrowed from the Internet.

jdb photos (Click on any photo to enlarge all.)

There are so many huge old trees in the Raquet Club.  I’ve been trying to catch a few before they radically trim them down.

For the Sunday Trees prompt.

When we were young, before love rusted,
how we pined and how we lusted.
We lived on love. So sure. Nonplussed.
As though we held a deed of trust
on those we kissed. We arched, they thrust,
our hearts pounding as though percussed.

We came home rumpled, dizzy, mussed—
our heads swirling, slightly concussed.
Our mothers warned. Our fathers fussed,
seeking to turn our dreams to dust.
Our hearts reeling in shamed disgust,
our faces flamed as they discussed.

And although we thought we must
pretend to listen, inside we cussed,
knowing their words to be unjust.
Within each throbbing teenage bust
beat a heart free of distrust,
bursting with love’s wanderlust.

Back there at our very starts,
as we were learning to use our hearts,
back when we thought they might combust,
our hearts were tender, without crust.
We gave them fully with no mistrust.
We thought the world of love was just.

The prompt word today was lust.

(Copied from the Internet. Love it!)

Love this seed pod stage of the Indian Shot flower as much as the bloom.  I found this one in a friend’s garden.  His granddaughter and friend were oohing and icking over a rolipoli bug on a neighboring leaf.  I tried to explain the history of the name India Shot but failed with my abysmal Spanish.  They politely extricated themselves and moved to something more icky.

If you are curious about the history, here it is, borrowed from Wiki: 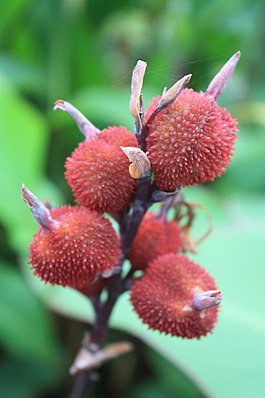 Canna indica, commonly known as Indian shot,[1]African arrowroot, edible canna, purple arrowroot, Sierra Leone arrowroot,[2] is a plant species in the family Cannaceae. It is native to much of South America, Central America, the West Indies, Mexico, and the southeastern United States (Florida, Texas, Louisiana, and South Carolina). It is also naturalized in much of Europe, sub-Saharan Africa, Southeast Asia, and Oceania.

Canna indica is a perennial growing to between 0.5 m and 2.5 m, depending on the variety. It is hardy to zone 10 and is frost tender. The flowers are hermaphrodite.[3][4][5][6] Canna indica sps. can be used for the treatment of industrial waste waters through constructed wetlands. It is effective for the removal of high organic load, color and chlorinated organic compounds from paper mill wastewater.[7]

Canna indica (achira in Latin America[2]) has been a minor food crop cultivated by indigenous peoples of the Americas for thousands of years.

The seeds are small, globular, black pellets, hard and dense enough to sink in water.[5] They resemble shotgun pellets giving rise to the plant’s common name of Indian shot.[1][8] The seeds are hard enough to shoot through wood and still survive and later germinate. According to the BBC “The story goes that during the Indian Mutiny of the 19th century, soldiers used the seeds of a Canna indica when they ran out of bullets.”[8]

The seeds are widely used for jewellery. The seeds are also used as the mobile elements of the kayamb, a musical instrument from Réunion, as well as the hosho, a gourd rattle from Zimbabwe, where the seeds are known as “hota”seeds.

Just as I’m ready to ingest
the morsel I consider best
and so picked out from all the rest
to be my last bite, savored with zest—
last memory of this gourmet fest—
from north and south and east and west,
descends each winged little pest,
radared in on diabolical quest
as though invited at my behest.
They put my appetite to the test,
settling as though to the nest,
their hairy feet intimately pressed
upon that morsel that I loved best.
I wave my hand over them, lest
they eat too much, then I confess
I guiltily consume the rest.

The prompt today is pest.

I snapped these lilies in the courtyard of Viva Mexico today.