Aha, it has arrived—my seventieth birthday.  Pictured is part of the detritus of a party that will not happen. A few days ago, I called off the 70’s Fondue Extravaganza Slumber Party and Games Night that I had planned. At that time, I was so sick with some mysterious intestinal and stomach disorder and I didn’t have the energy to do the last minute preparations—plus I feared I’d still be ill and have to call it off at the last minute. In addition, Yolanda was with her husband in the hospital and I didn’t have her to fall back on as usual.  At any rate, I’m feeling better today and so I’m meeting a few friends for an impromptu comida at a restaurant and chocolate fondue at Blue’s house later, so there will be some celebrating done.  This morning brings the welcome messages from friends on Facebook and I really do appreciate them, but as usual, they, combined with the daily prompt, have brought me to reflection.

I hope no one is offended by the below poem.  It is meant in no way to disparage the very welcome communication with old friends that such a day brings.  On the other hand, I can’t help but reflect on how our world changes and changes and how the cyber networks have not only brought us closer together but made it easier to drift farther apart.  I am as guilty if not guiltier of this than anyone else I know.  This is not an indictment, but rather a pondering over where we’ve been, where we are and where we are going—the sort of pondering one does at the age of 70, and if one is a writer or artist, probably at a much earlier age as well:

Facebook quips and tweets with hashes
have replaced  the dot dot dashes
of telegrams we used to send
to functions we could not attend:
birthdays and other days once meant
to celebrate with an event.

But now we sit in different places
pretending we’re exchanging faces
when in fact, for many years
our facial contact’s been in arrears.
They might have better renamed “Facebook”
“Those Who Have Vanished Without a Tracebook.”

It does not bring us face-to-face.
That is simply not the case.
Rather, it keeps us more alone
than even talking on the phone.
Old friend, it’s good to hear from you.
I know, there’s nothing more to do.

I’m just as guilty of it as you.
It’s what the whole world’s come to do.
We’ve simply moved too far apart
except in memory and heart.
It’s the new age’s way of seeing—
avoiding closer you and meing.

The prompt today was dash.

Disclaimer: Naughty word implied in this poem. Do not read if easily offended.

Mr. Clock, Mr. Clock,
though your advances I try to block,
my attempts you seem to mock
with your continuous tic tic toc,
echoed by my neighbor’s cock
crowing from his noisome flock.

No longer cheerleaders or jocks,
nor femmes fatale with flowing locks,
in Birkenstocks, flip flops or Crocs,
(worn in the winter complete with socks)
we huddle safe behind our locks,
afraid of terrorists with glocks
or neighbors’ children tossing rocks.

We hear your phone calls and your knocks,
we know you gather in your flocks,
your PTAs and your ad hocs,
while each of us sits in our box
as stubborn as a mule or ox,
busy in our painters’ smocks
or cooking spinach in our woks.

Our homes all sealed up like Ft. Knox,
we have no need of the world’s shocks,
its pestilence and chicken pox.
We have our pensions and our stocks,
our Lean Cuisines in our ice box.
We shun your CNN or Fox!!!

Our TV sets set to the past
neglect to show the latest blast
as all the world seems set to cast
Armageddon, coming fast.
So as you watch the latest drone
on your notebook or your phone,
as you predict and hate and moan,
please leave us the f— alone! 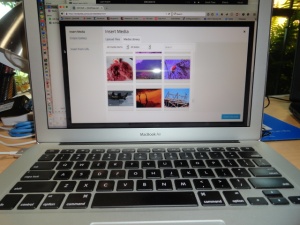 I’ll admit that I read Facebook and post on it as well.
When I can’t “ping” on WordPress, it’s my idea of Hell.
I care what followers think of me and follow every friend,
though facts about their lives and loves never seem to end!
It’s great to know that Cousin Pam soon will be a granny,
but must I know a mere acquaintance lifted up her fanny?
Ann Garcia hates my riddle. See how she berates me?
On OK Cupid, no one writes and no one ever dates me.

I’m not brief enough for Twitter and Instragram escapes me.
I’d post myself on YouTube, but no one ever tapes me!
I don’t know what they are and so I am forever gagged
on Pinterest and Flickr as well as Vine and Tagged.
MeetUp and also VK are eschewed at my behest.
My link to Linked In’s broken and I’ve overlooked the rest.
One day I’ll be less social. Say, “I’ve been there and done that.”
I’ll close my blog and Facebook, unpin pictures of my cat.

My life will become private. I’ll be quiet as a mouse.
If you should choose to see me, I’ll be right here in my house.
My blog I won’t read constantly to see what viewers say.
I will not count my “likes” or compare viewers day-to-day.
I will not be obsessive. No more followers will I seek.
Still, now and then I might have cause to go online and peek.
For though I am compulsive and my posts have become endless,
the only thing that might be worse would be to end up friendless!

The WordPress Daily Prompt: What’s the one piece of advice someone gave you five years ago that you wish you’d followed?  Well, perhaps it was not to get too caught up in social media.  As you can see above, I’m undecided about whether I should have followed it or not. (Wink, wink.)   The NaPoWriMo prompt was to write a Social Media poem, so as you can see, again, the two fit right together.  Somewhere, Carl Jung is smiling and nodding his head.              https://dailypost.wordpress.com/dp_prompt/powerful-suggestion/