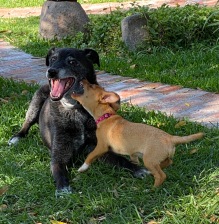 Please enlarge photos by clicking on them.

Since Zoe joined us, it has been nothing but frolic for Morrie, Diego and Zoey. She has certainly spiced up the family, especially since Cousin Kirk thought to bring out the Kong ball on a rope that I had tucked away. They love it and hassle for hours over it. They look and sound fierce but not once has anyone been hurt. It is all play. If Zoe gets too annoying, pulling Morrie’s face hair or constantly harrasing her, Diego simply puts his leg out and pins her down to quiet her down. Morrie never ever snaps at her no matter what she does. Diego disciplines her but never harms her in any way. He pins her down or rolls her over on her back. It is amazing to see how he cares for her and how patient he is. This morning  I went out and Morrie was sleeping in his bed, Zoe was sleeping in Diego’s big cushy bed and Diego was sleeping on the cold stone floor!
Zoe has three cushy beds inside, but had gone out to claim Diego’s and he let her.

When the rains came in hot summer,  wheat farmers cursed their harvest luck, for grain sodden by rain just days before cutting was not a good thing; but we children, freed from the worry of our own maintenance (not to mention taxes, next year’s seed fees and the long caravans of combines already making their slow crawl from Kansas in our direction) ran into the streets to glory in it.

We were children of the dry prairie who swam in rivers once or twice a year at church picnics or school picnics and otherwise would swing in playground swings, wedging our heels in the dry dust to push us higher. Snow was the form of precipitation we were most accustomed to–waddling as we tried to execute the Xs and Os of Fox and Geese bundled into two pairs of socks and rubber boots snapped tighter at the top around our thick padded snowsuits, our identities almost obscured under hoods and scarves tied bandit-like over our lower faces.

But in hot July, we streamed unfettered out into the rain.  Bare-footed, bare-legged, we raised naked arms up to greet  rivers pouring down like a waterfall from the sky.  Rain soaked into the gravel of the small prairie town streets, down to the rich black gumbo that filtered out to be washed down the gutters and through the culverts under roads, rushing with such force that it rose back into the air in a liquid rainbow with pressure enough to wash the black from beneath our toes.

We lay under this rainbow as it arced over us, stood at its end like pots of gold ourselves, made more valuable by this precipitation that precipitated in us schemes of trumpet vine boats with soda straw and leaf sails, races and boat near-fatalities as they wedged in too-low culvert underpasses.  Boats “disappeared” for minutes finally gushed out sideways on the other side of the road to rejoin the race down to its finale at that point beyond which we could not follow: Highway 16–that major two-lane route east to west and the southernmost boundary of our free-roaming playground of the entire town.

Forbidden to venture onto this one danger in our otherwise carefree lives, we imagined our boats plummeting out on the other side, arcing high in the plume of water as it dropped to the lower field below the highway.  It must have been a graveyard of vine pod boats, stripped of sails or lying sideways, pinned by them.  We imagined mind soldiers crawling out of them and ascending from the barrow pits along the road to venture back to us through the dangers of the wheels of trucks and cars.  Hiding out in mid-track and on the yellow lines, running with great bursts of speed before the next car came, our imaginary heroes made their ways back to our minds where tomorrow they would play cowboys or supermen or bandits or thieves.

But we were also our own heroes.  Thick black South Dakota gumbo squished between our toes as we waded down ditches in water mid-calf.  Kicking and wiggling, splashing, we craved more immersion in this all-too-rare miracle of summer rain.  We sat down, working our way down ditch rivers on our bottoms, our progress unimpeded by rocks.  We lived on the stoneless western side of the Missouri River, sixty miles away. The glacier somehow having been contained to the eastern side of the river, the western side of the state was relatively free of stones–which made for excellent farm land, easy on the plow.

Gravel, however, was a dear commodity.  Fortunes had been made when veins of it were found–a crop more valuable than wheat or corn or oats or alfalfa. The college educations of
my sisters and me we were probably paid for by the discovery of a vast supply of it on my father’s land and the fact that its discovery coincided with the decision to build first Highway 16 and then Interstate 90.  Trucks of that gravel were hauled  to build first the old road and then  the new Interstate that, built further south of town, would remove some of the dangers of Highway 16, which would be transformed into just a local road–the only paved one in town except for the much older former highway that had cut through the town three blocks to the north.

So it was that future generations of children, perhaps, could follow their dreams to their end.  Find their shattered boats.  Carry their shipwrecked heroes back home with them.  Which perhaps led to less hardy heroes with fewer tests or children who divided themselves from rain, sitting on couches watching television as the rain merely rivered their windows and puddled under the cracks of front doors, trying to get to them and failing.

But in those years before television and interstates and all the things that would have kept us from rain and adventures fueled only by our our imaginations, oh, the richness of gumbo between our toes and the fast rushing wet adventure of rain!

Writer’s note:  I know my sister Patti is going to read this and cry, and so I want to present you with this mental picture of her, college age, Levi cuffs rolled up above her knees, surrounded by five-year-old neighbor kids, enjoying her last big adventure out into the ditches of Murdo, South Dakota, during a July rain.

But wait!  A mere two hours of digging and another hour of editing has produced this proof of my former statement, so to augment your mental image, here is the real one: 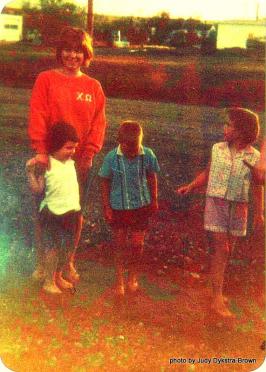 Not quite the gusher depicted in the childhood vignette, but nonetheless, Patti’s final puddle adventure. She had taken my visiting niece out. The next day the neighborhood kids rang our doorbell and asked my mom if Patti could come back outside to play! Ha.

The Prompt: Free Association–Write down the first words that come to mind when we say . . . home. . . soil . . . rain. Use those words in the title of your post.