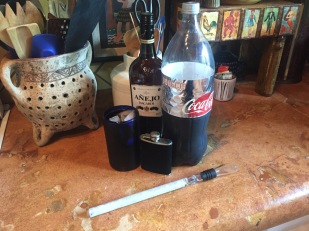 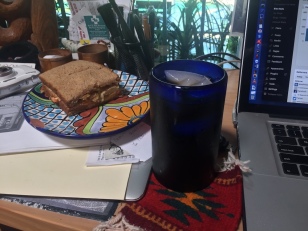 I had a marathon cooking day yesterday.  I’d been shopping, and bought a kilo of hamburger, four Italian sausages and two huge chicken breasts. In addition, I had 1/2 a roasted chicken I’d bought the day before along with vegetables that needed to be used, a bag of pearl barley and a variety of condiments.  If I’m going to mess up the kitchen, I’d just as soon cook as much as possible and freeze it, so in about 4 hours, I made a Chinese sweet and sour chicken/peanut casserole, the beef and sausage tomato sauce for a lasagna to be made later, stuffed green peppers, a big pot of cooked barley and a heavenly chicken salad.  Most of these I froze. The unfrozen stuffed pepper I intend to have for dinner tonight, but there was a little bowl of chicken salad—just enough to make into a sandwich, and although I’m trying to cut down on Diet Coke, a large open liter bottle that would just go flat if I didn’t drink it soon.

It wasn’t until I’d eaten two bites  of the sandwich and was about to have my first drink of Coke that I remembered a happening from the day before. Yolanda was mopping the floor in another part of the house and I was sorting out kitchen drawers yet another time, trying to put the things I used most in the top drawer, removing to the outside bodega some seldom-used implements, and consigning the rest to a lower drawer.  When I got to the plastic bag of  saved wine corks, bottle tops and the rubber plugs to reseal wine bottles, I picked out a little flapped pourer to put in the top of a wine bottle, wondering if I’d ever use it. Then I noticed the fixture at the bottom that indicated it was meant to be screwed into something and suddenly remembered that it was actually the top to a long aluminum finger filled with liquid that was meant to be kept in the freezer, then when needed, to be screwed into the capped pourer part and put in an opened bottle of white wine to keep it cold between pourings!  It had been a gift from a friend and I kept the bottom part in the door compartment of my fridge freezer, but unscrewed the top and put it in the drawer because it didn’t fit in the compartment.

Then I suddenly remembered that three days before, I’d put just the metal part into a 2 liter bottle of Diet Coke that I was taking to a pot luck dinner!  And remembered I’d thrown that empty bottle away when I got home!  And the trash can was empty!  I called out to Yolanda and asked if the garbage truck had come yet.  She said no and as we started to rush out to see if the vital element of my wine cooler was in the trash bag she put on the curb, it suddenly occurred to me that surely I would have noticed the long metal rod in the empty bottle.  I then remembered pouring the remains of a 1/2 empty bottle into another bottle, opened the fridge and found a full bottle of Diet Coke.  I shook it and heard a clunk!!!  When I poured the bottle out into a pitcher, I could see the comforting flash of aluminum and recovered what I had thought was lost!  RELIEF.  I funneled the Diet Coke back into the bottle, cleaned the aluminum shaft and restored it to it’s compartment in the freezer. All was right with the world.

So it was that when I made my sandwich today and spied the opened Diet Coke in the door of the fridge, that I decided I’d better drink it before it went flat.  And so it was that I filled a glass, added ice, grabbed my sandwich and made off to my desk and computer.  Bite of sandwich.  Check a few blogs.  Another bite of sandwich.  Long pull on that glass of Diet Coke. Surprise!!!  Only then did I remember that before I left for the potluck, I had laced the bottle of Diet Coke with anejo rum!! Easier than taking two bottles and mixing them there.

And that is how I came, at 1 p.m. on June 5, to be an early drinker. Tasted pretty good with the chicken salad.  I wonder how it will taste with one of the chocolate chip cookie brownies I made last night? 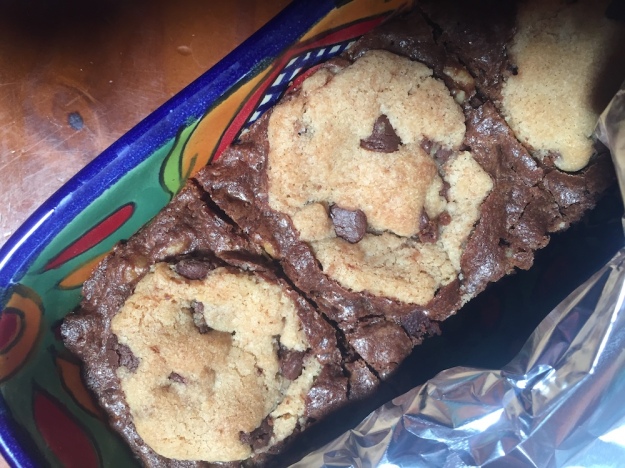 Beer is tacky. Wine’s a joke.
My preference is Rum and Coke.
Squeeze a lime in. Take a sip
to cool your throat and wet your lip.
My favorite form of inebriation
is always Cuba Libre-ation.

The Prompt: Pick Your Potion—What’s your signature beverage — and how did it achieve that status?      http://dailypost.wordpress.com/dp_prompt/pick-your-potion/