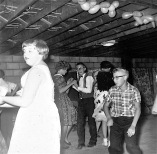 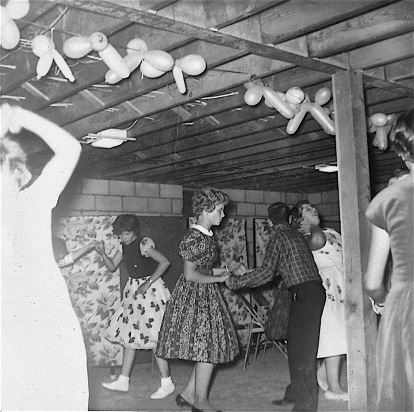 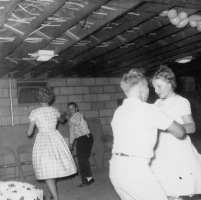 When I was in the eighth grade, I had a party for 8th and 7th graders in our big unfinished basement. We must have borrowed the chairs and screens from the Methodist church, as I recognize the ugly screens in these photos. I wonder what we were hiding behind them? Possibly water pumps used to pump water out of the basement during a snow melt the winter before, although I doubt that was a problem as a year later, I spent the summer tiling and painting this basement. I remember my dad having to jack up the house a bit as he increased the height of the foundations when the ground settled one year, so perhaps this was going on at that time.

At any rate, my party was held before the gentrification of our basement took place, and it was a big deal. All the boys’ mothers were calling to see if it would be chaperoned and there were big discussions about whether it was appropriate to have a girl/boy party. The coach demanded that all the boys had to leave by 10 o’clock as they were in training for basketball and had a curfew. It was the only boy/girl party anyone ever had the whole time I was in junior high and high school, other than school parties where we played games but didn’t dance much.

The 7th and 8th grades were in the same room with the same teacher, who was also the grade school principal and the junior high basketball coach. (That’s his picture sitting in the stands at a district tournament with Jeff Sanderson sitting behind him.) While he taught one grade, the other one had study time and vice versa–– all in one big room. It was interesting to hear your entire 8th grade curriculum while you were in the 7th grade, so by the next year it sort of felt like a rerun, or deja vu.

I’m dancing with Alan Rada in most of these photos. He was a year younger than me and seemed to know what he was doing on the dance floor. I am wearing a different dress in the photos of the earlier part of the evening not because I was a fashionista with too wide a choice to limit myself to one garment per evening, but because I split out the underarm of my first dress when I was spun by an overzealous partner during a jitterbug. In fact, I think the girls were teaching most of the guys to dance at this party.

The two older somewhat sinister looking girls are my sister and her friend Dianne, who were recruited to chaperone, I guess. Since my sister Patti, on the left, was the one who taught me to dance, perhaps she was there to see that we were teaching the boys to dance correctly.

The boy with the crew cut wearing glasses is my across the street neighbor Billy Sorenson.  The little guy who looks like he is about to slap Henrietta Oldenkamp on the butt is Keith Weigandt. Don’t you love all the girls in party dresses, bobby sox and white tennis shoes? We were soooooo cool. (Well, they were.  I wore nylons and one inch heels.How ordinary of me.) This must have been 1959 or 60.

(When I took my doll collection out of my room, my mother decided to put it out in the hall.  Guess which one of us never grew up?  She must have taken this photo of me before the guests arrived because this is the dress that ripped out under the arm during a too-ambitious dance move.)