The headline above and the first of these photos were from an hour  and a half ago.  I’m not in danger and looks like probably no houses are endangered.  Hard to tell but the fact that there have been no sirens makes me think this isn’t in a residential neighborhood, although in the pictures it looks like it is.  The fire seems to have died out lower down, probably because the wind has died down.  I still see a small fire higher up on the mountain.  So strange…I feel like I’m the only person in the world who even noticed! And it was huge right after the sunset–lit up half of the sky!!! 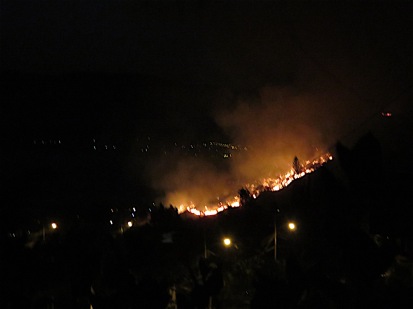 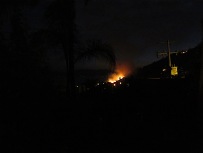 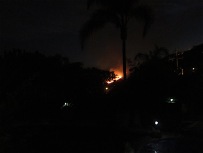 This picture is taken from my upstairs terrace. The dome you see covers the ceiling of my bedroom.

The fire down below seems to have burned out, but it is now moving farther up the mountain, along the ridge and on the other side.  The cross  half way up the mountain was on fire earlier and the flags and electrical wire that ran up to it.  It is usually lit by light bulbs.  This was a lighting of a different sort.  It really looked like the entire town was on fire, but a friend in town didn’t even know about it and said to her it looked like the fire was in the Raquet Club, where I live.  But, not one fire siren or other siren was heard.  So strange.

This usually noisy place… deadly silent.  Not even one dog barking.  Eeerie.

Just realizing that I’ve written a story about the firest every year.  Here is last year’s: https://judydykstrabrown.com/2014/09/30/fire-on-the-mountain/

And the year before: