I knew if I tried hard enough that I could find my picture of the mosquito–netted bed in my treehouse!  Finally found it in my Facebook photos.

I had to wait until I was in my sixties to get my treehouse. This is a story I wrote about it eight years ago:

Paradise From A Bird’s Eye View

I’ve been living in a treehouse in a coconut grove that borders the manglar (mangrove swamp) of La Manzanilla, Mexico, for three weeks now. This grove is next to a long lagoon, a wildlife reserve for the birds, crocodiles and other animals that live in this transition land between the ocean beach and inland terrain that rises steeply up to the coastal mountain chain. My small circular ground-floor kitchen and living room area as well as all of the furniture is formed of cob, a building material consisting of clay, sand, straw, water and earth.

It is about twelve steps out the front door to the bathroom, which is attached to the main house of my landlord. If I turn left, I can ascend a spiral staircase made of beautiful hardwood to a platform above that contains my wall-less but screened bedroom as well as a large unscreened porch, one-third of it covered with a palapa roof, the rest open to the sky. My aerie is the highest habitation point around me. Above me is only sky and coconut palms until you reach the mountains less than a mile away.

I came here to work without distraction on a number of sculptures for a show in early April. Yesterday, I emerged from the psychic spell of my work to hear a steady tap tap tapping in the tallest palm tree near my deck. It is just a trunk rising to a stub high above. I imagine the tree was killed and stripped of leaves by my landlord due to the dangers of falling coconuts. Now it afforded a perfect view of a woodpecker. He was much larger than the only woodpeckers I’d ever seen before—the acorn jays that I sometimes saw in the redwoods of my northern CA home. This was a real Woody Woodpecker fellow with full red headdress.

Unfortunately, my camera was not to be found, but yesterday’s missed photo opportunity was why I had made sure today to place my camera near the entrance to the outside deck. When I heard his steady rap rap rap early  this morning, it was from too far away for the camera to capture. I could barely make out the silhouette of the bird on a tall palm in the bird sanctuary next door.

Sinking again into the world of my artistic creation, it was three hours later that I was again jolted out of my own world by the crashing of object after object through the palm tree fronds of the lot next door.  I could hear men’s voices calling out and when I went out onto my platform, I saw coconuts falling from a tree a short distance away. First I’d hear the swing of a machete, then coconuts would fall, sometimes singly in rapid progression, at other times in huge bunches of ten to twenty coconuts let down by means of a long yellow rope.  Both of these methods of transferring the coconuts from tree to ground occurred too quickly to ever capture them on camera.

I returned to my work inside but kept an ear cocked, hoping to catch the descent of monkey-man, but a few minutes later when I went out to check, I was disappointed to see the rope gone.  What life takes away with one hand, however, it gives with another, for now the man was in a tree closer to my platform, so close that I could catch glimpses of his blue shirt through the dense cover of palm fronds far above.

I clicked picture after picture before my camera started to malfunction. Thanks to sea salt and humidity, this was to be a bad two months for cameras. My own favorite had stopped working three weeks before while we were still at the beach, its shutter unable to close. (The camera left for me to use by my boyfriend who had spent the first month with me but who had departed three week ago, now seemed to suffer some malaise as well. I tried battery after battery, to no avail. Then, suddenly, it started working again. )

By now, I’d called out to the man high above me as well as the two men far below us both–one who operated the rope and picked up loose coconuts, the other who carried the huge bunches to a waiting pickup a short distance away. I had plenty of pictures of the agile man who rapidly climbed the tree with only the aid of his hands and bare feet, so I came down my spiral staircase and headed around the house to try to find the other two men.

When I got to the gate, I saw three children playing with Bobino—the collective name I’d given the two identical tiny dogs who had made my life both a pleasure and a hell, depending on whether they were visiting me in hopes of pats and edible treats or punctuating the air at two in the morning with their loud and irritating squeeze-toy barks which prompted loud hissings and noisy flights through the underbrush below my treehouse by cats or raccoons or whatever they were chasing.

At first, I thought these children to be the cacophonous children of my neighbor, whom I’d never seen but heard a lot of. The baby was a crier and her older brother and sister were loud and seemingly naughty, judging by the number of times their mother shouted out “Gordo” to the boy and “Gordita” to the girl.  (Nicknames closely similar to “Fatso” or “Chubby” in English.)

The children came running toward me, Bo and Bino running at their heels. “Agua?” they requested, holding out the empty nursing bottle of their baby brother.

“Do you live over there?” I asked, pointing in the direction of the house next door. When they said no, I asked if that was a member of their family in the tree, and they said yes. I shut the gate and said I’d be back, skirting my landlord’s house. I returned with a bottle of purified water and a package of peanut butter cookies. Would they like a cookie? I asked. They would. Was it okay for the baby? It was. Seconds came about in short order. I asked again if that was their papa in the tree, and they said no, their papa was at the rancho. But yes, they were with the coconut-gatherers.

By now, the men had  finished, their pickup completely filled with a high-mounded load of coconuts. I took their picture, offered cookies again all around. Would I like a coconut, asked blue shirt?  I would.   With the same swiftness and facility of movement that had allowed him to scale a palm tree in under 30 seconds, he removed a coconut from the truck, whipped out his machete and with three swift movements, neatly removed the top of  the coconut and held his gift out to me.

How many coconuts had they collected? 150 he said. What did they sell them for? Ten pesos apiece. (about eighty cents U.S.)  1500 pesos was not a bad hourly wage. After I had heard grandpa monkey’s family history, traded smiles all around and showed them their pictures, they departed.

Every day has provided a new thrill up here in the air. Last month’s sound of surf as we slept in a house right on the beach has retreated into the distance, replaced by geckos, crickets, an occasional cicada, the rustling of animals unseen on the deck outside my screening or on the palapa roof or far below in the undergrowth. There are the frequent irritating sounds of the man who roars down the highway that runs just a house’s breadth away in an all-terrain vehicle, minus muffler. His passing back and forth and back and forth was constant all day yesterday (Sunday) as well as for hours every night after 10 or so. Two huge speed bumps and two arroyo dips do nothing to slow him down.

My living platform is where all the odors rise to:  the delicious aromas of my landlord’s cooking, the burning garbage of my neighbors, the noxious fumes of the copal he’d burned at a party a week before.

Here every sense is acknowledged as I slap the occasional mosquito that finds an opening in the screen or mosquito net. Now, even the sense of taste has been added, I realize, as I go down to the kitchen for a straw and sit drinking the delicately-flavored water of the coconut.

Paradise, someone who saw pictures of my treehouse on my Facebook page wrote as a comment. Paradise, I agree.

Although my treehouse “studio” was as high as the tops of smaller palms, the coconut palms being harvested were high above.

The ascent and descent were so rapid that it was difficult to capture this picture. 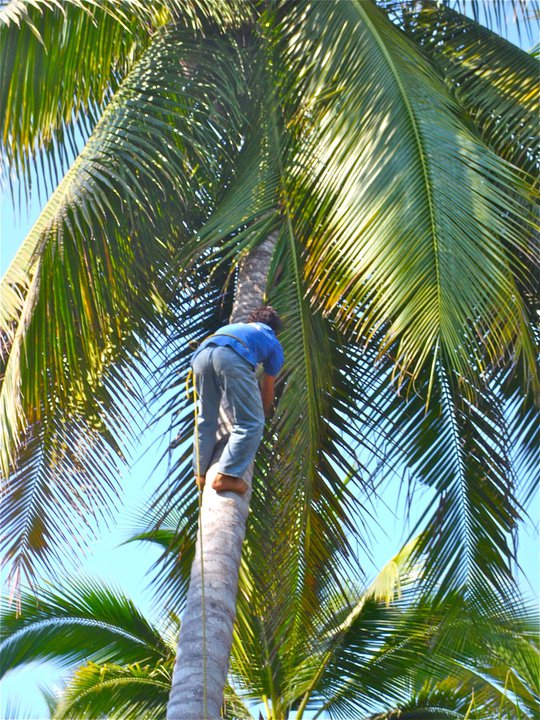 Anchoring the bunch with ropes to prevent damage in their descent.

My new friends, cookies and baby bottle clearly in view.

The coconut crew and truck with a full load.

Bobino.  Since they are rarely seen singly, I decided their names should be joined as well.

Ten minutes before this picture was snapped, this liquid refreshment had been hanging far over head.

Many thanks to Forgottenman for uploading these photos for me when my wifi went on the blink.

7 thoughts on “Paradise From a Bird’s Eye View”