At the beginning of our Shelter in Place experience, I issued a challenge to artist friends to create an art piece that chronicled their time at home. We each contributed material that the others could elect to use in their pieces. Although I didn’t use all of the material, I did use some material contributed by each artist. The box for this collage is an empty cardboard coke carton contributed by Candace.The material scraps were donated by Jeannie and Candace, as was the beer cap. The joker card contributed by someone was too large so I found a smaller version, then had Trump’s head superimposed by my Photoshop-canny friend Sharon.

The leaf holding a depiction of the yellow butterflies that fluttered around the tabachine bush near the hammock where Morrie and I spent many happy hours was contributed by Brad, the magazine that contributed the “Endless” by Jeannie..Most of the objects I either fabricated or found in my studio. The computer has a screen depicting our president’s announcement suggesting we inject various elements into our bodies.Diego is depicted with one of the two and a half dozen freshly-baked peanut butter cookies he consumed when we were all busy dealing with plumbing and internet problems.

The book I was formatting is shown miniaturized, but somehow ended up being copied as a mirror image. The pencils and paintbrush I fabricated, the scissors are tiny miniatures from my charm drawer. Since the first month and a half were filled with the sounds of rainbirds (Mexican name for cicadas) I had to include a cicada…and my infestation by bees is recorded as well. Lots of food and drink fills out the rest of the box.. and music and books. All-in-all, a busy time makes for a stuffed box. When I finally am able to leave and go about business, I intend to have a clear plexiglass box made to hold the box in better shape. Until then, it remains in its own tweaked shape. Pictures will enlarge if you click on them.

Diego with a peanut butter cooke. He devoured 2 1/2 dozen.

The pleated piece behind the Corona Music beer cap is a used coffee filter donated by someone.

That’s Kukla on top of the Corona Virus “Cure.”

Endless time–the Endless cut out of a magazine contributed by Jeannie or Candace. The honeybees are another story as Carlos the bee man and I have been dealing with trying to remove thousands of the creatures from a stone wall. They have infested my property!

I painted the little plastic computer and added the topical news to its screen.These items all fabricated except for the scissors.

Tequila and Coke with lime. Medicine. 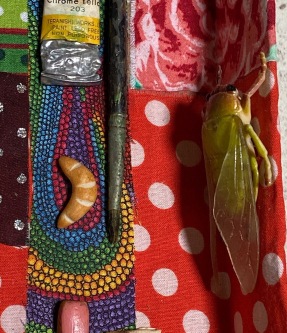 The rainbirds were a constant chorus in the background until the rain started.

The Tabachine bush I could see from the hammock was full of these little yellow butterflies. No, not a real one. I also loved watching the birds and tried many schemes to construct a bird feeder and bird bath they would use. It never worked. Diego uses the present one as a watering dish.

Painting projects. Nice to get back into the studio.

These are miniaturized pages from the “I Really Want A Puppy” book that Isidro is finishing up on the illustrations for. For some reason, they printed out as mirror images. Perfect metaphor for these crazy times.