The murals being painted on the walls of my house, the wifi installation saga, the bee adventure, the water/plumbing saga–all are events now past, but further stories were waiting to be told. This is the story of a number of little mysteries down through the years that have been solved or are on their ways to being solved due to Jesus’s sleuthery. I here share that story with you because after all, what else have we all got to do?

Click on the photos to read the story and to enlarge the photos. 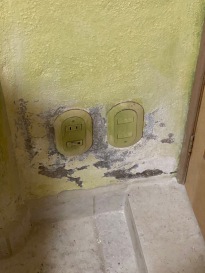 I had noticed patches of silitre on the walls of the guest room, as well as a number of other places on the outside of the house and a few inside, but that is par for the course in Mexico where they use too much lime in the concrete to enable it to dry faster.

If you wonder what silitre is, it is the same as salt peter of other fame. 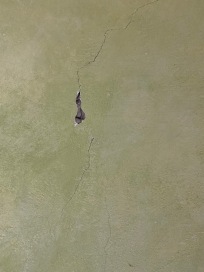 This winter, however, during the rainy season, my guest room flooded two times with an inch of water–thankfully just up to the bed but no further–about half of the room.

It seemed impossible that it was coming in under the sliding glass doors, since they were raised 3 inches off the terrace. And what was causing so much moisture in the walls? 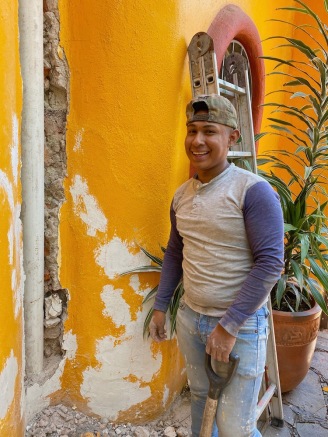 This caused me to call Mohammed Kazem, who was my contractor for my studio and gazebo, who in turn sent Alfredo who decided to attack the guest room problem first. I have suspected for years that it might be a broken pipe embedded in the concrete and so he spent the morning chipping away, 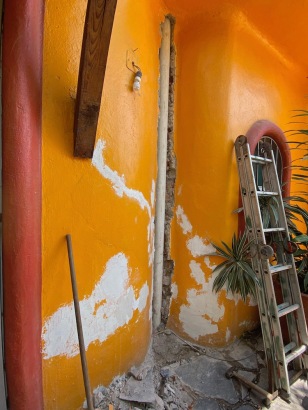 Unfortunately, he had started his exploration on the second floor so now I have a huge hole in my house. How they will repair the pipe, I don’t know. I guess that is tomorrow’s installment.

And we still have the issue of that possible big hole under my house that’s causing all the cracks—as evidenced by all this repair work of the stairwell up to the second level as well as crack in the guest room. I guess that is the day after tomorrow’s installment.

22 thoughts on “Mysteries of Home Ownership”