Bentley, Bearcat and Patti arrived at my house in the belly of their mother when I lived in Boulder Creek, CA in 1987.

Then, in 2001 in Mexico, a few months after I had adopted Lulu, Annie peeked out at me from under a car on a busy street in Ajijic. She was tiny and alone in a dangerous situation. What was I to do?

Annie in one of her favorite lounging spots

The first dog in this house was Frida, who made our acquaintance as she trotted down the side of a very busy highway. When no one claimed her, she came to live with me 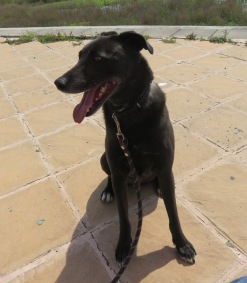 Then Diego joined the family,

and they both hung out by their food dishes at certain periods of the day.

I’m trying to be a good influence for my Mom, who is entirely too wrapped up in that machine she taps day and night. Today was different. She had a date with me! Sorry Diego. I’d like to say it is your turn next, but I’m afraid this is one place where being the runt of the litter pays off!

Sadly, Frida left us, leaving Morrie and Frida to tussle it out over who was top dog.

And Morrie brought this little fella into the house in his mouth during a rainstorm. He had obviously been washed out of his nest. 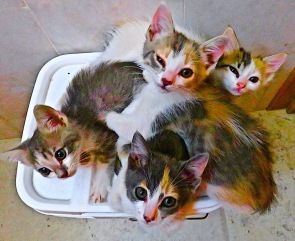 And last but not least, Kukla and Fran and Ollie and Roo came to join the family. Sadly, only Kukla and Ollie remain, along with Diego and Morrie. Who is next?

(Please click on the photos to enlarge them and see the full captions.)

A magpie, a mole, a raccoon and a rabbit.
I fear that my dad was a creature of habit.
He could not resist any sort of a baby.
A baby rattlesnake? Well, yes. That. Maybe.

Abandoned kittens and a liitle waif thing
held up at a cattle sale from center ring.
Who knows what he bid for the spotted small terrier
he pulled from a rubber boot used as its carrier?

Mother objected, as she always did,
then proceeded to make the puppy her kid.
Dressed it in doll clothes and cuddled and babied it.
Drove an hour  to a vet who distempered and rabied it.

Dad would enter the house looking sheepish with guilt
with some baby animal wrapped in a quilt
or a box or an overshoe to obscure sins
of procurement of fur or feathers or fins.

Mother would object, “You didn’t, Ben, No!”
Then she’d wipe her hands of batter or dough
and reach out for the creature my dad had discovered,
and after first protests, she quickly recovered.

Always an animal somewhere in the house.
A parakeet, kitten, cottontail, grouse.
Could all of their mothers have succumbed to the plow?
I only question their orphanhood now.

Nonetheless, the truth of the babies we raised
is that my dad’s motives can only be praised.
He adored babies, be they human or not.
And most kids turn out to be as they’re taught.

Twelve puppies, ten cats are the sum of the creatures
who, once I grew up, have been prominent features
of the lives that I’ve led. Every one first a waif,
who came to reside in a home that was safe.

In Australia and Africa and Boulder Creek,
I was never the one to procure or to seek.
The animals come, seeking shelter or food
and somehow ended up as part of my brood.

Gretchen, Rootia, and Kiddo and Patti,
Bentley and Bearcat and other kids catty:
Tallulah and Annie and Kukla and Fran.
Ollie and Roo. I’ll go on if I can,

Six Mexican beach puppies,  Frida and then
Diego and Morrie brought the total to ten
of puppies who lived for good or awhile
while I found them an alternate safe domicile.

You may call it obsession, but I have another
word to describe this tendency to mother.
This need to take care of what whines, barks or preens
is just not my fault. It’s built into my genes.

The prompt for NaPoWriMo today is: think about a small habit you picked up from one of your parents, and then to write a piece that explores an early memory of your parent engaged in that habit, before shifting into writing about yourself engaging in the same habit.