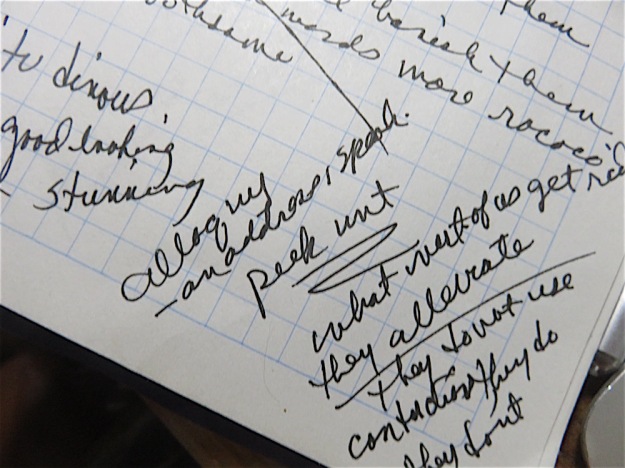 This blog’s teeming with challenges by the day or week.
I seem to find a new one everywhere I seek.
This leads to combinations of words that are deplorable.
At times the stories that they tell, admittedly are horrible.
Still we keep on churning out this poetry and prose
using all these silly words that other people chose.
Why do we use these words that they give us fully blown?
Because the alternative is thinking up our own!

Searching through the rubble of my bedroom desk drawer, I find the estranged top to my last remaining Flair pen. I’ve been looking for it for weeks, sealing up that last precious pen in Saran Wrap and a Ziplock bag, lest it dry out. They don’t seem to import Flair pens to Mexico and the last time I looked for them in the states, I could only find lurid colors of orange and purple and green.  No black.

My first attempts to scribble poetry with a mere rolling writer were not successful.  That attempt was without precedent.  I’ve been scribbling with Flair pens for as long as I can remember. Their little felt nibs flow so effortlessly over the surface of the paper. The track they leave is wide enough to make a writer feel important and acknowledged. In the world of writing aids—pen, paper, notebooks, staplers, dictionaries—Flair pens are the perfect neighbors. They do not make a noise or leave an impression on the page under them.

Now I move to restore this much-looked-for cap to its spouse, only to find someone has moved the ziplock back containing the pen.  With no one else to blame but the cats or Yolanda, my three-times-a-week housekeeper, I mine my mind for memories of where I might have moved it. Sigh. Place the top in the place formerly designated for its companion. The search continues.

This piece was written making use of these three prompts: If you are in need of a prompt, click on any URL for how to submit your work.:

I’m a hayseed sort of girl. I don’t believe in fancy.
To me, anything foreign is likely to be chancy.
I don’t eat things like escargot. I shudder at foie gras.
I buy my shoes in canvas, but never peau de soie.
When folks speak French to order food, I find it most pretentious,
and when they draw me into it, I’ll likely grow contentious.
I don’t like words that prettify. I view them angrily.
Like au courant, je ne sais quoi, pardon or vis-á -vis.
Why don’t folks just eat and say what comes naturally?
I think it’s done to irritate simple gals like me!

This site called “Daily Addictions” posts a prompt daily and has a site to post to that is easy to use and easy to see the responses of others.  It is a great replacement to The Daily Prompt.  Please check it out and support it.  There are other sites presently developing their posting page but this is the only one that I know of that is currently up and running.

Today’s prompt is Concerted. Please write a prompt and post it to their site.

Concerted: contrived or arranged by agreement; planned or devised together. A concerted effort: done or performed together or in cooperation.

Has anyone else noticed that it is much harder to make a concerted effort after the age of 65?  Plans somehow get skewed, no matter how much harder we try. One person forgets the meeting. Another is ill or merely having an “off day” and can’t get out of the house.  Yet another shows up but has forgotten to do the tasks they have agreed to do. Once at the meeting, one or two people can’t hear. Another is dealing with a phone call that has just come in on her cell phone.  Two others ignore their calls but either can’t figure out how to turn off their phones or actually don’t hear the drone.

The leader of the meeting keeps forgetting the last word of her sentences,  but luckily her friends are accustomed to this and they take turns filling them in for her. When she switches to a power point demonstration, the pictures seem to have turned themselves upside down and the man switching to each new photo has problems coordinating them with the vocal cues.

Several who can’t see move forward to a seat closer to the screen. A man in the front row falls asleep and everyone is distracted watching him as his head bends lower and lower. His next door neighbor wonders at what point she should put an arm out to catch him lest he pitch forward onto the floor.

The meeting seems to go on for longer than usual and at five minute intervals, women work their ways from wherever they are situated in the rows of seats, past the stiff legs of those they must pass on their way to the aisle, trying not to stumble over feet whose owners seem unable to shift them far enough out of the way. Their panicked eyes and the speed with which they move reveal that they have waited a bit too long to begin their journey.  This serves as a lesson to several other women who rise and work their way out behind them.  As each in the group returns, at least one other audience member stands to work her way out in the same direction.  Occasionally, a man just leaves for a short stroll out into the garden. Everyone finds this suspicious.

Neighbors ask neighbors to repeat what was just said. Questions are asked that have already been answered minutes before. Men make suggestions that are widely agreed with, to the chagrin of the women who have made the exact same suggestion earlier in the discussion with no response.

There is a disagreement and one of the participants remembers that it is time to go home to feed her dog.  Another person wants to get home before dark. Another has arranged for a taxi that will be there in five minutes.

If you are looking for a daily prompt, try this one.  It posts daily, is easy to post your answer on and stays active for a month.  The Daily Addictions prompt today is “concerted.” 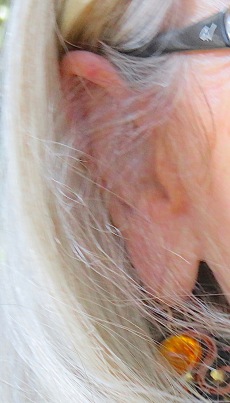 I fear that I am flummoxed about where to post this poem
since Daily Post abandoned us, our postings have no home
where we can find each other sufficiently clear.
Just where do we post them? Is it here or here or here?
I applaud your efforts. I know you’ve planned and planned.
You have your daily promptings sufficiently manned.
The problem is we need one place where we can find each other
once we have surveyed the prompt and written yet another
poem or essay most profound that we would like to share.
Except, where should we put it?  There, or there or there?
The solution to this problem has me tearing at my hair.
Please give me a solution. Where should I post this? Where?

Perhaps I’ve overstepped my bounds, and if I have I fear
that you’ll simply say that I should  hang it in my ear!

The prompt today is flummoxed.

I have made a resolution
to attempt last-minute absolution
for the sins I have collected,
just in case I’m resurrected.

You see, I have a certain hunch
that later I’ll be in a crunch,
burdened by a heavy pack
of life’s misdeeds tied to my back,
condemned for all eternity
to never be completely free
’til I atone for every one.
Only when I’m down to none,
will I advance thus unencumbered.
Now that I know my days are numbered,
if I have ever slighted thee,
now is your time to contact me
to receive my late apology.

So Mia culpa, lo siento.
In just one second, un momento,
I will voice my sorrow for
all the ills I’ve caused you, or
all the times I didn’t say
those words that might have made your day.
For though I don’t believe in hell,
I figure that I might as well,
just in case, try for exemption
to win my guilty soul’s redemption.

Since the Daily Prompt from WordPress is now defunct, I’m trying out a number of other daily prompts.  The Daily Addictions word today is redemption. Feel free to play along by clicking on the link and adding your own post on the theme to the Mr Linky link. 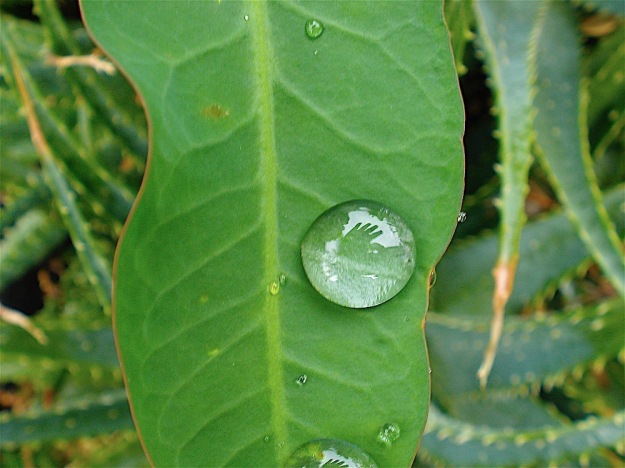 That Small Feeling That Something’s Wrong

My intuition sounds its gong.
I have an inkling something’s wrong.
I look  around  for what’s amiss,
but cannot tell what signals this.
My arm and neck hairs stir and rise,
as if to warn me of surprise.
This tiny hunch keeps me alert,
but insight is a fickle flirt.
When nothing happens, it goes away
and I live out my normal day.
That tiny niggling little prickle
might lead to nought, for insight’s fickle,
and sometimes things are just so small
that they aren’t there at all.

This poem was written in October of 2016. The RDP2 prompt today is insight. 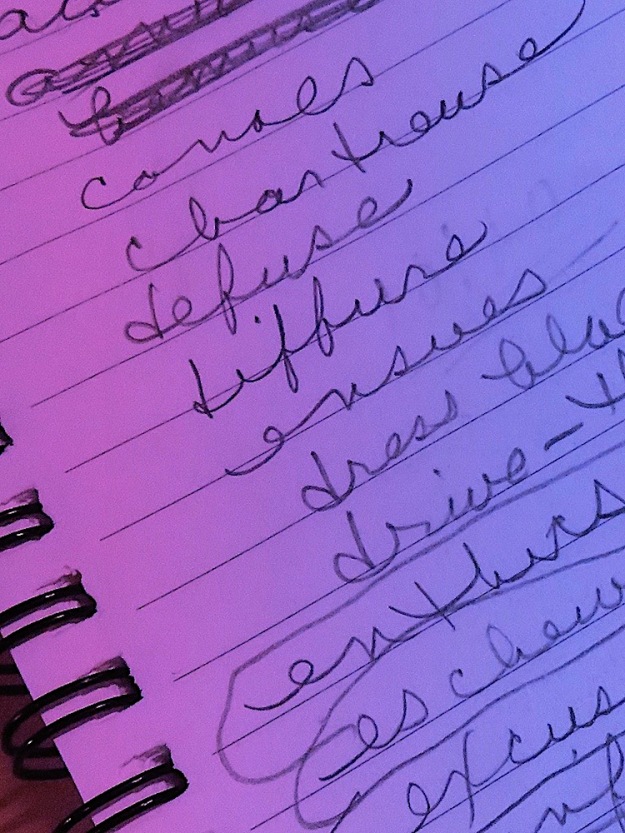 The words packed tight within my mind
seek the empty page.
They fly like hummingbirds and hawks
escaping from their cage.
But when all my empty places
I seek to fill again,
too many words rush in at once,
creating such a din
that nothing can be made of them.
I cannot restore order
in these alien syllables
that flood across my border.

I did not think these previous lines.
They just crept up on me.
I place words here upon the page
and thereby set them free.
They have no place within my head
where I had plans to write
a solitary love poem.
Instead, they spar and fight,
one trying to beat the others
to the front line of my mind.
Love words elbowing their way,
lined up in back of “pined.”

So “heartsick” steps on “passion’s” toes.
“Adore” runs out of steam
trying to reclaim the place
where words like it must dream.
I no longer know the purpose
that I set out upon
I fear the mood is broken,
my concentration gone.
The thought that any love poem
will come is now absurd.
Minutes ago I was in love,
but now I have been cured!!

For the WordPress prompt word broken.

Tomorrow will be the last day for the WordPress Daily prompt.  Please comment HERE if you want to try to help me to change their decision.  Whether you write for the daily prompt or just enjoy reading those who do, please help us try to stop this change for the worse. This is an extensive rewrite of a poem written over three years ago under a different name.

I am starting a forum campaign to prevail upon WordPress not to drop the Daily Prompt.  Please comment HERE to agree with me and perhaps help effect a reversal of their decision.

Not only has it been an invaluable aid to me in jump-starting me in my writing each day, but it was also a way to find new bloggers to add to my favorites list. Without it, I will once again just fall back on my favorites list without much of a way of meeting new bloggers.

Please comment both on the forum and in comments below.