My sister and I at a park near my grandma’s house in Kansas on a merry-go-round similar to the one in the school playground across from our house in South Dakota.

Their creaks were my alarm that kids were on the elementary school playground across the street and if my biggest sister was downstairs or away from home or even sleeping as soundly as she always did after coming home late the night before, I’d sneak into her room to look out on the playground from above and see who was there. I knew the difference in the sound between the merry-go-round and each set of swings—the little swings next to the little slide, or one of the three big sets directly across from the block my house was on. Higher, with longer and more flexible chains, these swings could be made to loop de loop—pass up so high that you actually went over the top of the frame the swings were suspended from and wound the chain once around the pipe.

Some of the boys could repeat this three or four times until the swing got so high that none of the little kids could get up to it. Then the janitors would have to get their tallest ladder and go up to push the seat over and over the cross pole with one of their big push brooms to straighten it out again and bring the seat down closer to earth.

There were rules forbidding loop de looping, but the boys would come after school when all the teachers had gone home and even our janitors, Mr. and Mrs. Polachek, who lived kitty-corner across from the south end of the playground, were at home in their backroom away from the sounds of kids in the neighborhood, sealed up tight and safe. They were Polish, and now that I think of it, probably displaced persons from WWII. Their accents were thick and her temper was short and they were the objects of constant tauntings from the boys. One year the boys had hung a dead cat from their front porch on Halloween. I wish I could remember whether I thought this was funny, as many of the kids did. I hope I didn’t––that I was as sickened by it then as I am now.

The creak I was listening for was the creak of the merry-go-round. Teepee shaped, it had a wooden runner all the way around it a foot up from the ground. There was a handrail about thirty inches above it, so you could stand on the wooden runner, facing the center pole, hold onto the hand rail and enjoy the ride as the big kids ran around in circles around the merry-go-round, pulling it with them to go faster and faster, then stood on four sides of it, grabbing the handrail pipe and pushing it off to make it go faster still. One by one, more onlookers would be enrolled in the joint effort to get it going fast enough. Then they’d jump on and everyone would pump up and down, sticking their bottoms out into space as they bent their knees, pumping to keep up the momentum.

There were other ways to use the Merry-go-round. The bigger girls like Marie Holstedt who lived on the street that faced the opposite side of the playground from the one my house faced, would sit on the foot board with her boyfriend Robert. Their feet side by side on the ground, they would sway to and fro in a kind of two-step movement—two to the right, then one to the left––their knees touching with their swing to the right, their hips touching when they swung to the left. When they did this, the sound of the merry-go-round reminded me of the strange rhythmic creaking I’d hear sometimes late at night in my house.

It was probably the TV antenna on the roof, my mother had said. Or maybe the furnace trying to pump out heat, she had speculated when I pointed out that it had been a windless night.
Life was simple and I believed her. Only now do I make sense of it and of my father’s late night short trips down the hall to the bathroom—the washcloth always draped over the tub faucet the next morning.

It was an innocent age where it was entirely possible to be eleven years old and to never have had the least idea that anything like sex existed in the world. Yet a good deal of what eventually led up to it went on in the playground across from my house. Older girls would sit in the swings, swaying back and forth without ever taking their feet from the ground. Or, take fast running steps forward and backward without really letting go and allowing the lift off. To their side or in front of them would be their crush of the day or the week or the hour. If he was not the boy of choice, sometimes the girls would switch swings. If the boy switched again, too, and the other boy let him, then it was a sign language of sorts that indicated which boy favored which girl, and if the girls went home, a clear message that things had not matched up correctly to their satisfaction.

But at other times––usually during games of ditch ‘em played in the twilight and darkness of summer, courtships could progress toward hunkering down in the ditches around the playground, close up to some culvert where the ditches were their deepest, the girl in front, the boy with his arms around her waist, holding her back from running to try to get to home base when one of the littler kids who was “it” ran past without seeing them. In these junior high years just past childhood, the objects of the games started to shift until finally in high school, the rituals of the old games were left behind entirely and ditch ‘em became merely a starting place––as did the swinging back and forth, the pumping, the dance.

Today, with merry-go-rounds a thing of the past, they are still an appropriate metaphor for what life pushes us toward from our birth. It begins with our rocking in the arms of our mothers, the rocking chairs of our grandmothers, the wild swings through the air locked hand-to-hand with our fathers. It is what slippery slides and swings and merry-go-rounds and dancing move us towards. Everything going around and around and in doing so really going back and forth from generation to generation. Passing the world on and fading away. Now and then doing a loop de loop just because we can. 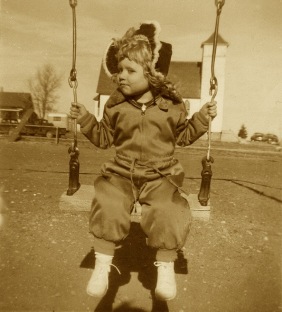 In response to The Daily Post’s writing prompt: “Ode to a Playground.”A place from your past or childhood, one that you’re fond of, is destroyed. Write it a memorial.