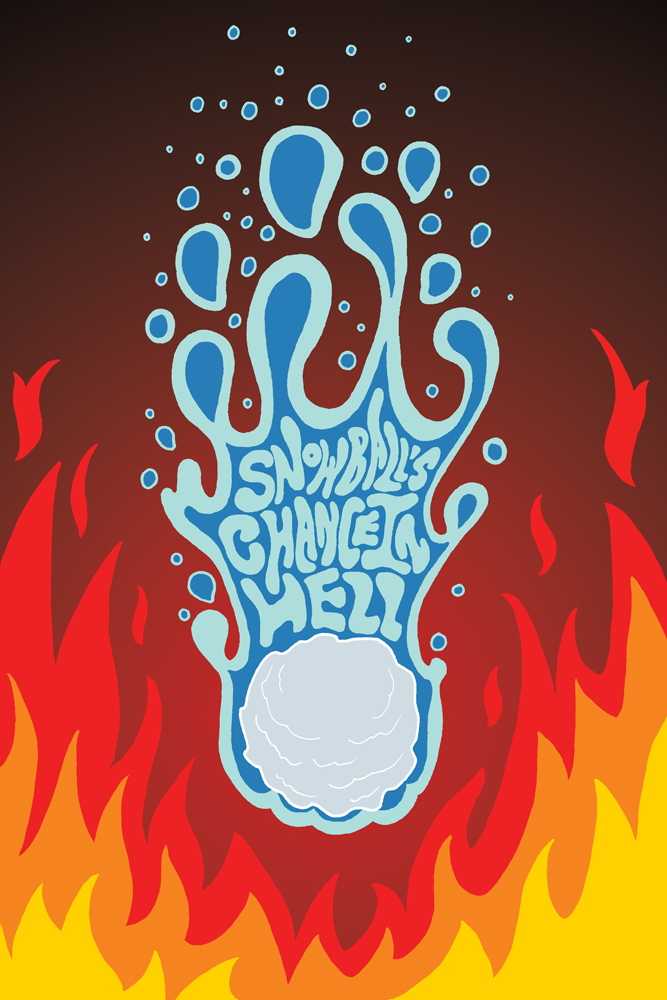 I just got home from a luncheon where I was surprised to discover I’d received the 2017 Ojo del Lago Award for outstanding literary achievement in the category of best fiction for a short story, “Snowball in Hell.”  I don’t believe I’ve ever published it on my blog as it was done as a timed writing for my writing group in La Manzanilla. Since it loosely follows the prompt for today, which is “tentative,” I’ll stretch things a bit and publish it today:

“There’s not a snowball’s chance in Hell,” she snarled at him as he beat a hasty retreat out the door. Everyone knew she was a feisty old dame, but she still felt compelled to prove the fact often enough to remind herself of the truth of it. Lately, she’d been feeling herself mellow. Growing teary-eyed at the sight of kittens on YouTube videos—having little heart-flutters when she glimpsed other women’s grandchildren in photos on cell phones.

When she stood back to consider this strange new course of events, she could only view it as she might view a mysterious disease—look at the symptoms, try to figure out a cure. Surely, being around children or kittens might help. Nothing like reality to pop the bubble of a fancy. Kibbles underfoot and gumdrops in the sheets could surely cancel out cute. Although she had no experience with such cures, since they’d never been necessary before.

Jake had wanted kids long ago. Actually, he’d gone on wanting them for a good twenty years—as long as she might have provided them—but her refusal had been as determined as her response today, when he had asked if she perhaps would be interested in a Caribbean cruise. Her on a cruise ship with old men in madras shorts and women in beauty-parlor hairdos? She tried to think of what she would do on a boat. She had taken a mental oath years before to never play shuffleboard and bridge made her dyspeptic. She’d discovered this in college, waiting for Karen Schuller to play her hand, drumming her long perfectly polished fingernails on the bridge table, screwing her little red cupid box mouth into a perplexed knot.

“Play the damn card!!!” she’d screamed internally, afraid that if the bitch ran one more finger tattoo on the table that she’d slam her fist down on that perfect hand. It seemed easier to give up bridge than to give up the aggression she felt every time she heard the sharp drumming and viewed that pensive mouth.

Cruise ships, she was sure, were full of Karen Schullers, all grown up, with fingernails an inch longer, lips forty years more wrinkled. And they made you eat things like lobster and crabs—giant underwater bugs that no one would ever convince her were meant for consumption. But the truth of it was, that aside from these irritations, being cooped up in a cabin with Jake for a week or more must didn’t carry any attraction for her any more. The old coot got stranger by the day. Just last night, on the couch, watching Ray Donovan, he had tried to hold her hand. Forty years married and like a teenager, furtively reaching over. They’d been done with all that syrup years ago, but now, why was he thinking hand holds and Caribbean cruises?

What month was it? She tried to sort out a reason. Valentine’s Day, birthdays, anniversaries, Christmas––not that they ever observed any of them. Finally, she gave up. There was no accounting for old men in their first states of senility. She would just have to put up with it, but she didn’t have to go along. She settled herself more solidly into her chair and grabbed the remote, switching on the TV connected to her computer. Millie Perkins had Facebooked her another puppy/bunny video. She tried to resist, but found herself moving the mouse over to the arrow. The bunny had loppy ears and the puppy had very long hair and a little vest. She clicked off the TV quickly when Jake came into the room, but didn’t greet him.

“Clara?” he asked tentatively. She pretended not to hear. “Honey?” In his hand was an envelope that looked sort of crumpled and a bit dusty, like he’d been hanging onto it for awhile. “Remember your last checkup? The results came a few days ago.” She looked up at him, and his face looked soft––like the face of the bunny. Something was written on it––a different sadness that she hadn’t seen before. He sat down beside her on the couch and risked once more taking her hand. And this time she let him.

The prompt today was tentative

19 thoughts on “Snowball in Hell”