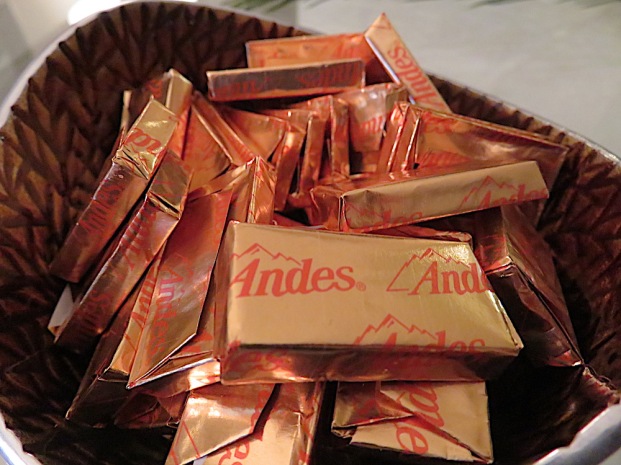 Chunks and grains swirl round and round. They form a muddy mass.
I keep my paddle churning them as I turn on the gas.
As all the chunks and  bits melt down, the volume now decreases.
I watch the whole mess carefully. My vigilance increases.
I see it all congealing—an oily inky sludge
that after lengthy stirring finally turns to fudge!
This horrid, bubbling, lumpy goo that appeared so pernicious,
in the end turns into something creamy, rich, delicious.

In a recent conversation with a friend who is a scientist, water expert and inspector of water systems and industrial water waste, I learned the interesting fact that there is some hope regarding environmental issues, even in the wake of the Trump administration’s ridiculous easing of standards. He assured me that they’ve had little influence on the industrial systems he inspects as the large companies, first of all, are set up to conform to stricter standards and the restructuring of the system would be so costly that they are not about to alter things to meet new laws that will probably be changed back again anyway and which even they see the dangers of.

Hopefully, one thing that we will learn as a result of this ongoing disaster and embarrassment is that we need to alter the powers of the president, especially regarding his appointment of lifetime judges and his ability to administratively change standards that should be determined by congress or popular vote.  The other changes that must be made are in the electoral college and lobbying rules. Perhaps the only good that will come out of this POTUS “calling trump” on us is that it will stir the pot and bring about much-needed  change. The rules of our democracy did not take into account the possibility of the election of such an ignorant, childish and corrupt leader as Trump has proven to be.

The prompt word today is sludge.

7 thoughts on “Stirring the Pot”