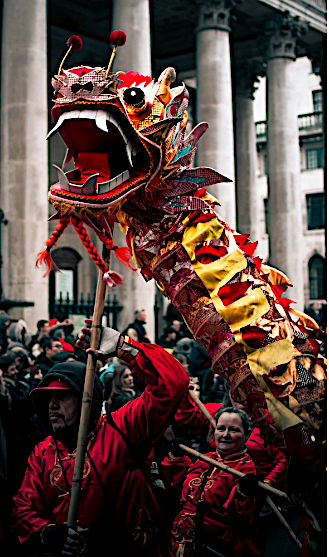 photo with permission from Lachlan Gowen on Unsplash

Night of the Dragon

Behold the dragon, how it flows
from its tail up to its nose.
Thirty feet and thirty arms
move the dragon’s sinuous charms—
its razor teeth, its threatening frown—
through the streets of Chinatown.
On its head, a golden crown.
Its many humps move up and down,
forming valleys, growing hills
while moving over rocks and rills.
Straightening out to cross the bridges
spanning between neighboring ridges.
Never flying through the air,
rising only up the stair.
So many mortals make one beast,
one night a year to roil and feast
on errant spirits wandering out
their vile sentiments to flout,
chancing their ends once more to free
those rotten souls they used to be.
One night of all we form the back
that otherwise the dragons lack.
We form their arms and form their feet,
arousing awe in all we meet.
And thus it happens, once a year,
we become that which most we fear.

Prompt words for today are flow, behold and dragon.

5 thoughts on “Night of the Dragon”