My mother, Eunice King, in goat cart with sister Edith, shortly before their father and sister died in the flu epidemic.

I had been told by my mother that the first deaths from that flu were in Ft. Riley, Kansas—brought home by soldiers to the fort where my maternal grandfather worked. I’d always been told that he died in that epidemic, as did his daughter Pearl, who was my mother’s sister, but looking through family records while looking for these photos, I have discovered that they seem to have died two years before the flu epidemic, so I am digging urther. The account of that period below is an excerpt from the family chronicle of the friend of a friend of my sister, who sent it  to her and she sent it on to me. I am sharing it here because  I think this account has some relevance to our present situation. My mother’s family lived in Junction City Kansas, near Ft. Riley. The story told below took place in Wyoming and describes what a different family went through during the time of the epidemic.

In 1873, Dr. William A. Hocker, was on his way to California to begin his career as a physician. During a stopover in the frontier town of Evanston, Wyoming he was beckoned to the bedside of a young woman with pneumonia fighting for her life. Unwilling to abandon a sick patient, Dr. Hocker let the train go on without him. So began his lifelong commitment to the development of medical care in Wyoming. He practiced in Evanston, Frontier and Kemmerer; served in the Wyoming Territorial Legislature; and was instrumental in founding the Wyoming State Hospital where he also served as the first superintendent.

During the long winter that followed his operation Papa had little time to think about himself. He was city and county health officer, and a dreadful wave of influenza was sweeping the nation that fall and winter of 1918. However weak he might be physically, he was still in command of the community’s health regulations.

With the coming of the flu he established a general quarantine. He ordered that the town be closed, and he put out guards on all roads and at the railroad station. It was a drastic step, but he felt sure that it would save lives. He gave the order that no one was to enter the town.

The ways of influenza were mysterious, and no one knew for a certainty how it could be brought under control. But this was evident in Papa’s quarantined community: as long as the order was in force, about three weeks, no flu cases occurred. It was a well-known fact that people were dying daily in other towns. But in Papa’s town the quarantine was working.

Then the impatient merchants rebelled. Business was nearing a standstill, and they were greatly concerned. They demanded that he lift the order. Papa counseled with them. They were insistent. Then he called a public meeting so that the issue could be put to a vote. In his wheelchair, he sat with the other town officials on the platform. There was compassion in his voice as he spoke. His hands trembled a little, yet he fought his fight with a calmness and a strength that belied his real condition. But he was dealing with an unknown enemy, the flu itself. He could assert that he believed the quarantine was wise, but there were no scientific proofs. His whole argument was a plea for common-sense precautions, all manner of precautions, no matter

if the community erred on the side of safety. Business might suffer temporarily – yes; but who knew how many precious lives were in the balance?

In the end he was outvoted. The merchants had come to the meeting determined to break the quarantine, and they were backed by a solid majority of those present. The quarantine was lifted. Within a week or ten days the tragic death wave that had already swept through surrounding towns had come to Papa’s community as well; and before the winter had passed the results were appalling. 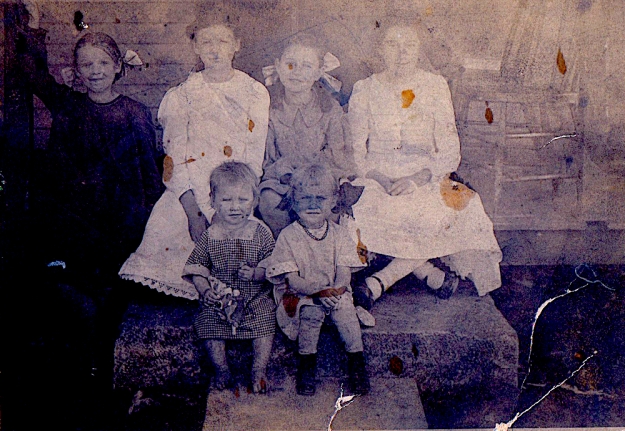 My mother Eunice (Pat), bottom left, with her sisters. Edith is next to her in the front row with the hair bow. Second row is Bessie (Betty),  Myrtle, Alpha (Peggy), and Pearl.. They had two brothers, Hiram and Wayne, who are not pictured. The traveling photographer just dropped by and asked if they wanted their photo taken. All the older girls ran up to fix themselves up in their finest, but didn’t bother to dress up mother, who is photographed in her little sack play dress with messed-up hair and  dirty bare feet, toes wiggling and holding her doll.

39 thoughts on “An Unknown Enemy”