After he finished the murals on my house, Jesus Lopez Vega went to paint a fabulous mural on the outside wall of my friends Candace and Bob’s house.  They had a sort of ribbon-cutting for it yesterday where Jesus explained the symbols of the mural and also talked about the book he has written on the history of the villages on the north side of lake Chapala. Hopefully, it will be published next year. Here are some of the photos of the mural and the people who came to its grand kickoff. You can click on the photos to enlarge them and read captions. 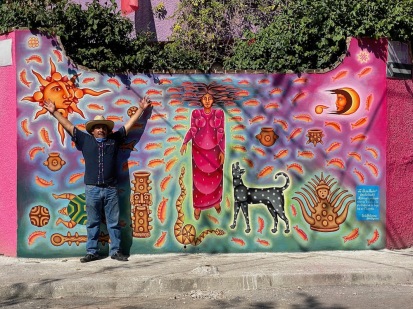 Jesus was held captive by this mural for the five weeks he worked on it.

His wife Berta kept the studio open to viewers while his son Eduardo assisted on the mural. 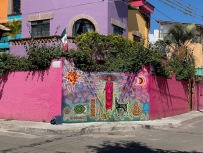 Here it is in its entirety 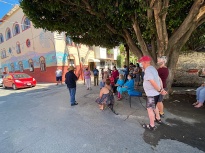 and here are the folks who showed up for the unveiling. 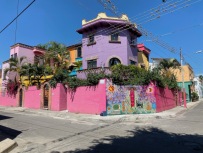 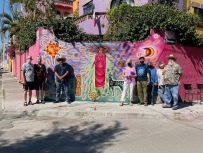 as well as four apartments that they rent out. This is a photo of some of the folks who live there.

Jesus, Candace and Bob in front of their new beautiful mural.

This is one of the thousands of small sacrificial votive clay figures, thousands of years old, that have washed up on the shores of Lake Chapala. Some of them are featured in the mural.

And here is the mural closer up with no people obstructing the view!

Michicihualli is the woman spirit of the lake who provides all of its bounty. This mural is in tribute to her and to the fertility of the lake.

The mural is located at the corner of Zaragoza and Nino Heroes in Chapala. It is two blocks north of the Malecon and two blocks east of Francisco Madero, the street that the church is on.