What are the chances that I would capture this action while I was exercising in the pool? But, I had noticed a large golden-orb weaver spider on my neighbor’s wall and although I knew it was too far away to get a good photo, I was listening to an Audible book and the phone was in reaching distance, so I thought I’d try. Coco and Zoe jogged over to check out my action and this is what resulted. Since i was holding the camera in my hands, I captured most of it, other than the recovery action which meant I had to set the camera down. Please click on photos to enlarge and read the story.

The picture of the spider was barely worth capturing, but I had to try.

Coco and Zoe trotted over together. to see what I was doing,

Zoe was the first to decide to leave the other side of the pool and to come closer.

Coco was a bit slower in the action.

But after Zoe started out,

Coco soon joined her on my side of the pool.

Zoe had a look around 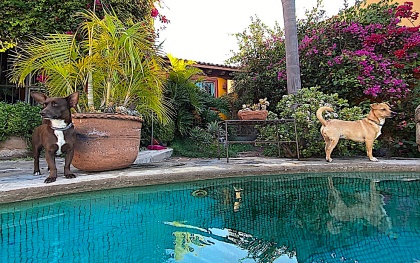 and moved a bit away from Coco,

but Coco soon joined her

and was up to her usual hijinks.

The problem was, they were a bit too close to the edge of the pool for such antics

with this sad result. Zoe, misbalanced by Coco’s head under her tummy, splashed into the pool 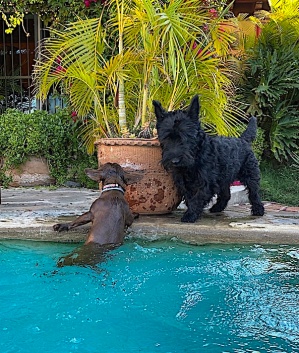 And Coco soon followed her. Coco was able to get herself out of the pool,

but after two failed efforts by Zoe, I lifted her out. Good thing I was there. This is the first time this has happened.