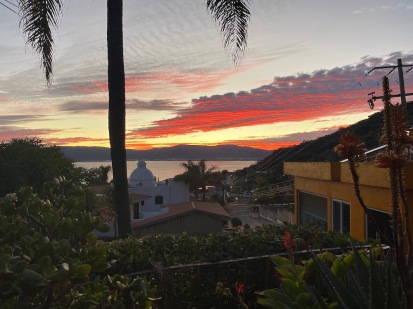 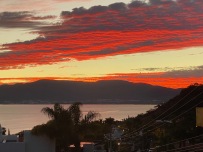 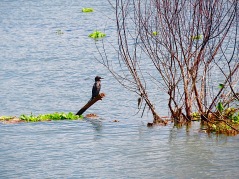 Cormorants are taking advantage of every branch of this tree that has become partially submerged in the waters of the rising Lake Chapala.

For:  Bird of the Day (BOTD) challenge.

When I drove into town this morning for the writers group reading at the Nuevea Posada, it looked like one of our formerly dormant volcanoes on the range between where I live lakeside and the road to Guadalajara had gone active again, and was erupting! 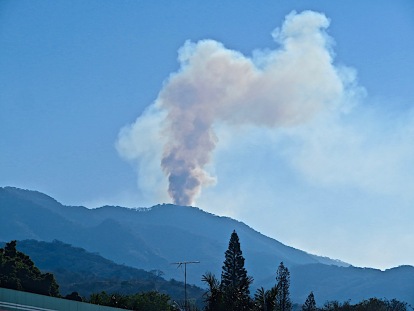 What I was actually seeing, however, was a huge fire that has been burning for a couple of days now on the other side of the ridge. As I left the reading and went east on the Carretera, I could see that between the hours of 10 a.m. and 11:30 a.m. the fire  had jumped over the ridge in four places and  spread to the Ajijic side of the mountains. 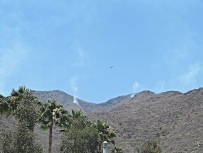 As we pulled into the Centro Mall parking lot, we heard helicopters.  They were scooping water out of the lake and flying it overhead to dump on the fires. 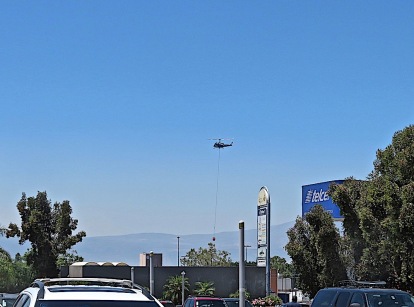 All-in-all, an eventful couple of days for lakeside and environs. I can’t see the fire from my house, but last night I was well aware of the smoke and had to close all the doors and windows up tight. Here’s hoping all the firefighters remain safe and that the winds do not mount during the night.

These fires happen every year around lakeside when brush and grass is tinderbox dry, often prompted by farmers burning off their fields before the rainy season. One year, much of Mt. Garcia across the lake was on fire. (go HERE to see and hear about those fires.) Another year, it was the whole range behind my house.( Go HERE to see photos of this fire.) This is the first time I’ve seen a fire of this magnitude in the hills above Ajijic, however.  It has some distance to go before it reaches any dwellings on this side of the ridge, but if a high wind were to kick up tonight, it could spread fast.  Crossed fingers.

There were so many wonderful phases of this rapidly changing sunset, that I couldn’t cull out any more than I have.  I am perhaps excessive, but this sunset certainly was as well, so I feel I’m justified.  If you click on the first photo, it will enlarge them all. 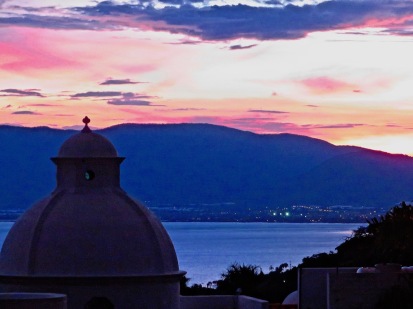 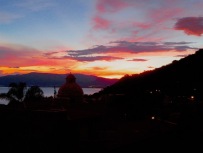 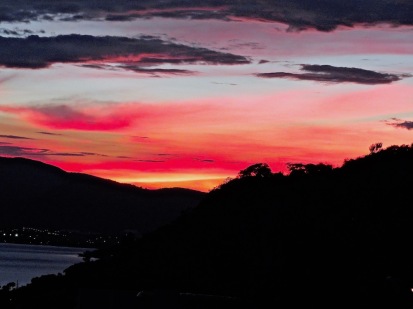 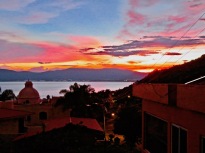 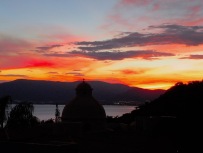 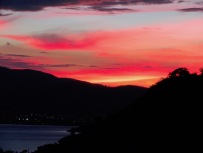 If you live long enough, what others consider history will become your life. Twelve years ago, I walked for hours every day on dry lake bottom, in places the lake a mile further out from its usual banks. Then, five years from its supposed extinction, the rains came. The floodgates of the dams upstream opened as well and the lake swelled to its former girth. My old walking trails through the cattails and the willows became suffused in a watery world. Tree tops became the perches for egrets scant inches above the waterline, and the lake became once more the private property of homes and landowners who fronted on the water.

But now, again, the water has retreated, and for the first time in eleven years, I am again walking on what was once lake bottom. I see for myself how this venerable lady who spreads  her skirts under the mountain known as Señor Garcia, has done so in a curtsy, before beating a hasty retreat. Freshwater shells pave the dry silt. Discarded soda bottles , moss-covered and corroded, lie in a pile as though emptied like catch from a fisherman’s net. Coots and grackles replace the white pelicans who have circled over in their last goodbye like other snowbirds heading north. Sandpipers whistle their reedy pipes, as if to rein in the small boy who runs with a rag of kite streaming out behind him, creating his own wind.

A man in red shorts wades out to a bright yellow boat, lugging a five gallon gas container. The kite pilot and his two brothers, as tattered as their kite, walk past, then circle as though I’m prey, to sit behind me on an archipelago of large stones that form a Stonehenge around the sheared-off skeletons of willows. I wrote about these willows in their prime— when the villagers had come to clear and burn them eleven years ago, not knowing they would not grow back. What had been foremost in their prayers for years would soon happen. The lake would rise again to her former banks. But now she once again beats a hasty retreat, leaving the stubs and skeletons of trees revealed again. It is a wasteland stripped of the life of water or of leaves.

“Rapido!” the boy in the green shirt demands of his brother. Their sister pulls the bones of the kite from their plastic shroud. Rags turn back to rags, their flight over. The brother in the black Wesley Snipes T Shirt winds the coil of string as though it is valuable and can’t be tangled or lost. The sun is half an hour from setting. “Be off the beach by nightfall,” a man had warned me as I set off for my walk. He was a gringo, and perhaps unwarrantedly cautious, yet still I am ready to start back. I remember the banks of blackbirds that used to settle in clouds in the reeds—acres and acres of cattails—enough to get seriously lost in. At sunset, the birds would lift in funnels by the thousands– a moving tornado of winged black that moved as one. But they are history, now.

“La Sangerona”—that bright yellow boat whose name translates as “the annoying one” does not disappoint. Despite her fresh infusion of fuel, she has to be pulled manually ashore. She is like a princess being towed up the Nile. She expends no energy to further her own movement. A red dog, wet sand to his high tide mark, settles politely in the sand beside me. Like iron filings drawn to their pole, the children gather closer. They pull at the rocks as though mining for worms— prod at the packed sand, casting eyes up, then away. Curious but silent.

Now, all run away. I am left with one grackle, three sandpipers and fourteen coots, drawn out by the waves and pushed back in, over and over in a lullaby. As I climb to the malecon, the sun dissolves into the mountains to the west. Shadows of palms are blown in a singular direction, all pointing north. Below them, the skirts of lesser trees, as low as bushes but lush in their fullness, toss with abandon, as though this lower wind does not know its own direction. I have a hunch, go closer and examine. I am rewarded. They are willows, swaying to obscure a fresh stand of cattails, once again beginning their long march of dominance.The water that was interloper is history. And I am part of it. 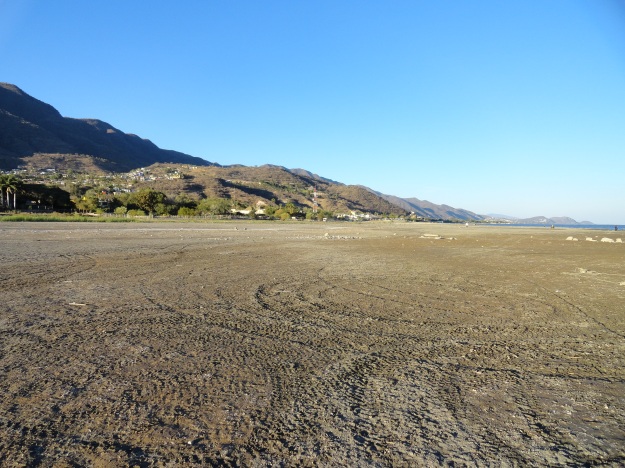 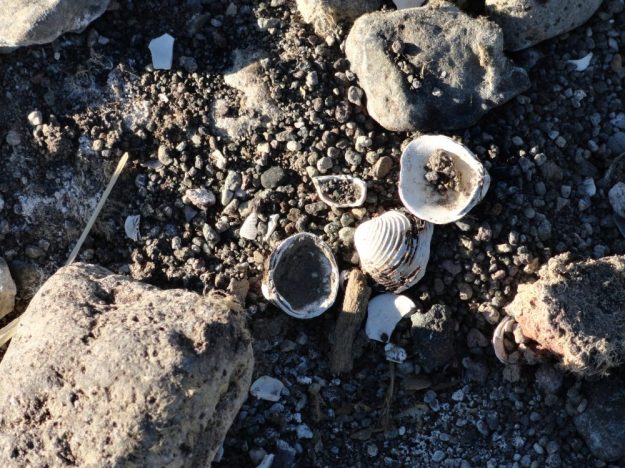 Freshwater shells, revealed by the retreat of the lake. 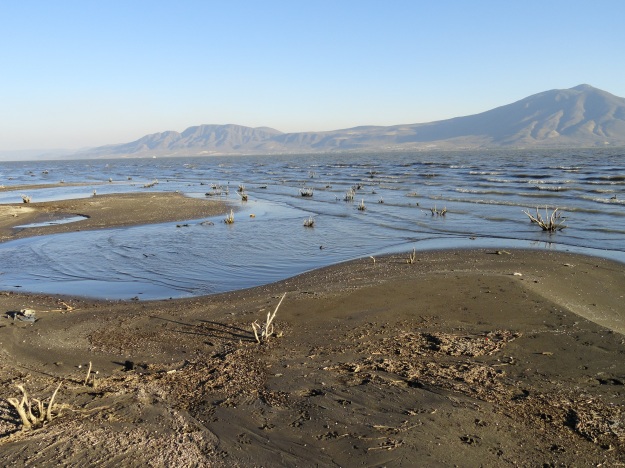 The kite flyer and  the recalcitrant “La Sangerona.”

This is an extensive rewrite of a poem posted years ago. The prompt today is funnel.

I was invited by Cee from ceenphotography.com to participate in a challenge called Seven Day Nature Photo Challenge. (Check out Cee’s nature photos as well as her thousands of other wonderful photographs by clicking on the link above.

As part of this challenge, I am to post one nature photograph a day for one week and to ask one other person to join the challenge each day.  Today I ask you to check out the  photography of Irene Waters  and I’m nominating her to take part in the Seven Day Nature Challenge as well.