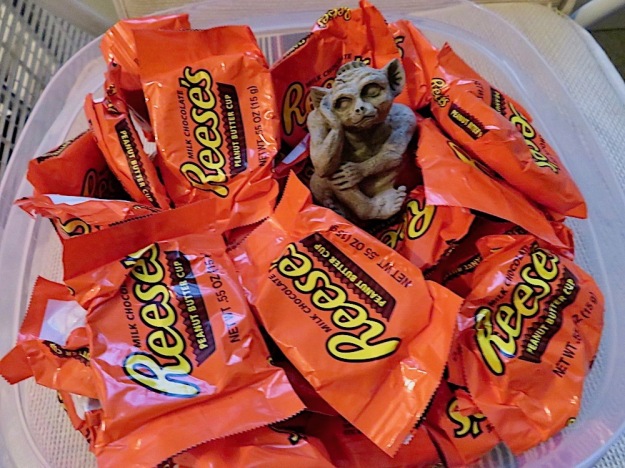 The Dangers of Early Halloween Shopping

Well, just a few more weeks before those little Halloweeners will be flooding through the gates of the Raquet Club. There are more every year and a few years ago we started all contributing candy and making up bags for each trick or treater and handing them out at the gate to the club. So, I made my trip to Walmart and bought 7 big bags of miniature Snicker bars and suckers, as well as a bag of chocolate chips so I could make cookies for my neighbors who are always bringing me shares of their suppers. I then made the mistake of bringing the Halloween candy into my house.

Instead of baking cookies, I  took a little nap, but awakened to that candy calling my name. I resisted for about 15 minutes before I tore a corner off one of the Snickers bags and had a single miniature Snickers bar––about one inch square.  I sealed up the bag. Tried to take my mind off it. Then felt suddenly thirsty and on my way to the water jug, had to pass very close to the chair the shopping bag holding all the candy was on. The bag that had been opened seemed to be saying something to me, so I leaned closer. “Eat me!”  Shades of Alice in Wonderland. I opened the bag and had just one more tiny piece of chocolate, caramel and peanuts before I called my next door neighbor and asked if I could bring the rest of the candy over to his house until it was time to take it down to the clubhouse to pack up the bags.

After he stopped laughing, he admitted it wouldn’t be much safer at his house. “You would eat my candy?” I queried. Shocked.

Well, no, he admitted. Probably not.  Were there Andes mint bars involved, he asked? No way. I don’t believe in mixing mint with anything but chewing gum. So he agreed and we met in the street outside our houses for the hand-over.

So, end of story until this Skype exchange between ForgottenMan and me.  By the way, the chocolate chips were still unopened in the cupboard. Cookies still unbaked at the time of this interchange a few minutes ago. The comments to the right are mine. 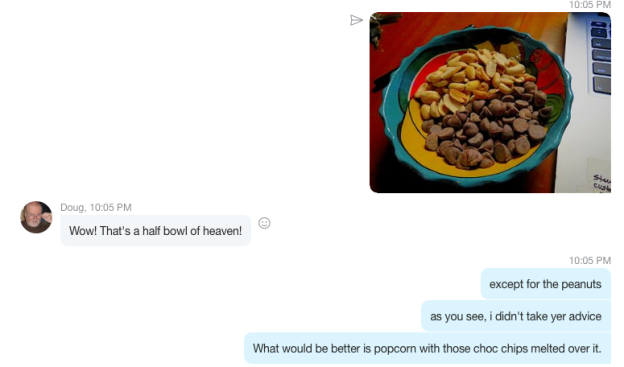 Forgottenman says I “might wanna” explain that an r&c is a rum and coke and g&t is a gin and tonic. I think he’s underestimating my audience!!  And thus go our evenings!! Somewhere I’m sure people are discussing great thoughts. Not so this evening with us.

17 thoughts on “The Dangers of Early Halloween Shopping”