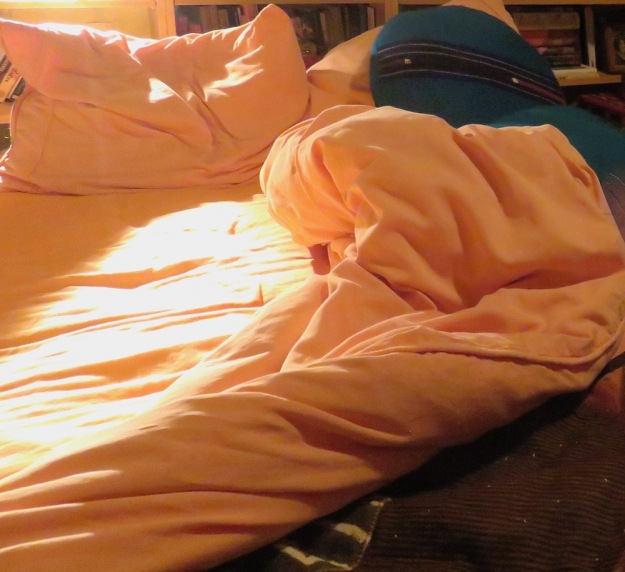 Do you struggle when the alarm goes off every morning? If you have a really hard time, you could have something called dysania. This means you simply can’t get out of bed for about 1 to 2 hours after you wake up.

Doctors have reported an outbreak of dysania.
Folks suffer from the syndrome from Missouri to Albania.
It’s interfering with world markets and sustainability,
and athletes have determined it’s affecting their agility.

Campers seeking all the pristine beauty of the wilderness
report that they are sleeping in and therefore they are hiking less.
Card sharks spend more time at home, bed-bound in their lair
for hours in the morning, playing solitaire.

Moms trying to spark  interest in starting their kids’ days,
are equally lethargic, and prone to merely laze.
When it comes to what to call the curse, science is still vague,
for It seems most of the scientists have come down with the plague.

They put off their experiments and their cogitations
in lieu of morning lollings-about in their habitations.
Coffee shops are suffering and worldwide, gyms are closing
as people give up other morning hangouts for reposing.

The whole world has gone lazy and is given to the lying-in.
So much for morning exercise, conditioning and getting thin.
And although most joggers have ceased morning exploring,
Sealy Posturepedic stocks have been reported soaring!

They’ve tried to conduct seminars from New York to the Hague
to try to solve the puzzle of this early morning ague,
but the lazy attendees have said we’ll have to guess,
for science cannot seem to conquer this new laziness!

They haven’t even named it yet, so in their usual fashion,
world wits have exercised their nomenclature-driven passion.
Since the scientists are sleeping in, they do not have a clue
that the whole world has agreed that they have the Supine Flu.