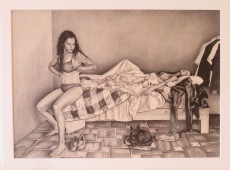 Isidro in front of his own gallery in San Juan Cosala. 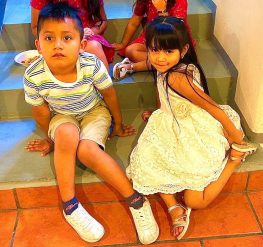 Isidro’s Grandchildren. Guess which one is grooming to become a super model?

Some in the crowd were very taken with the refreshments.

These are some shots of Isidro Xilonsochitl’s show at the Cultural Center in Ajijic Plaza, taken yesterday, March 4, 2022, at the opening reception. The show consisted of a number of very large canvasses as well as multi-image sculptures. The children pictured are his grandchildren, the lovely woman at the refreshment table is his daughter Paloma, the mother of two of the children.

5 thoughts on “Isidro’s Creations, in Paint and in the Flesh”