With half a life lived in the dark,
an owl’s hoot, an answering bark,
the moon across the water scattered,
ragged clouds, wispy and battered––

I float in night and solitude,
the night determining my mood.
I lie in darkness and I brood,
a momentary interlude.

When sunlight comes in fits and starts,
The day brings out my other parts.
They rise in me from dawn to noon,
dispelling powers of the moon.

Thus balanced between dark and light,
each half consumes its daily bite.
I welcome each within its time
Life varied, balanced and sublime.

For the Early Bird or Night Owl Prompt. 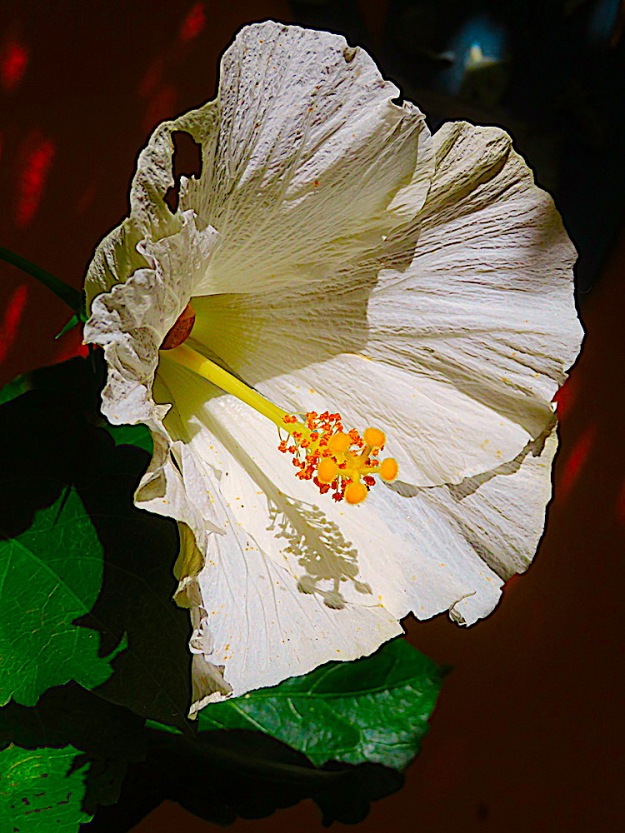 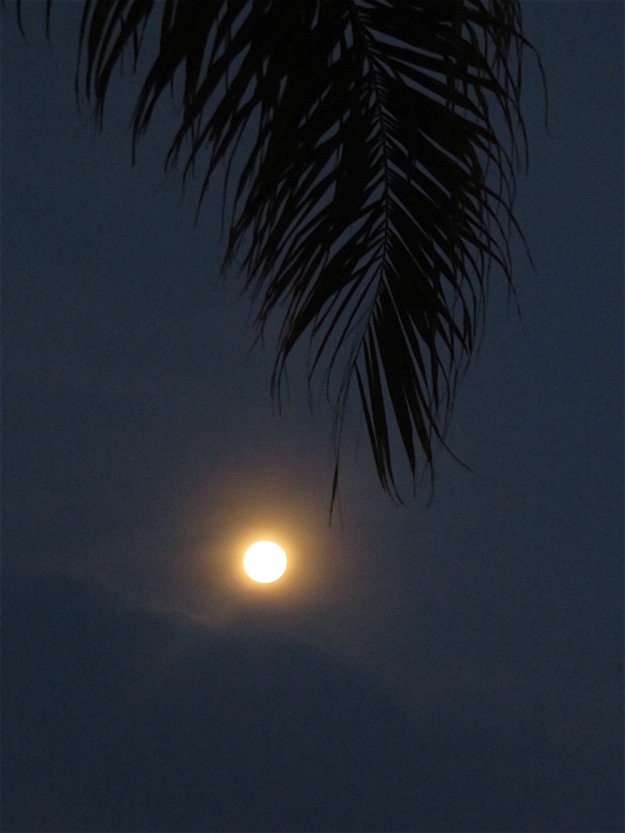 I love this dark and quiet night
far from the loud and glaring light.
Solitary in the dark,
no mewling cat or warning bark.
The whole world in conspiracy
hides and holds and cushions me.
I move through water, side to side.
Through liquid currents, I freely slide.

Palms backlit by an opal moon
that’s dulled by clouds too soon, too soon.
The silence sliced by mosquito’s whine
mars a night no more divine.
Invader of my private night,
I fear its subtle stinger’s bite.
It moves in circles through the air
from shoulder to my neck and hair.

I swat at where it was until
it, alas, has had its fill.
Then it is off, leaving me
the pleasure of my company
devoid of interloper’s claim.
I wipe out memory of my name,
my age, my talents and my ills.
Suddenly, the pool fills

with the spreading whole of me
becoming part of all I see
and touch and smell and feel and dream.
I am, at last, all that I seem.
I float toward light, then climb the stairs,
free of worry and of cares.
If I can only fall to dreams
before old niggling prods and screams

invade my memory to call
me up against the judgment wall,
my whole intent will be fulfilled.
I’ll have achieved just what I willed.
Such are the charms of veiled nights
that cover over daylight’s frights
and lull us to our sleep and dreams
convincing us life’s what it seems. 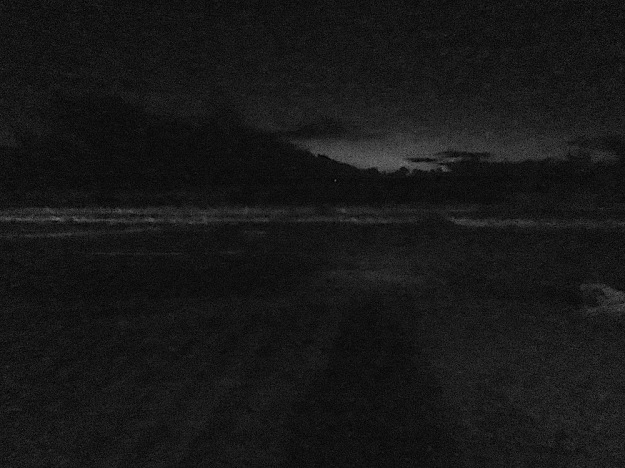 The rain is falling drop on drop.
It’s lessened but it doesn’t stop.
No lightning breaks the coal dark sky,
no noise of cars nor passers-by.
I have the night here all alone,
activity stripped to the bone.
No barking dogs, no shouts and cheers
of parties shifting up their gears.
The whole world’s snuggled under covers,
strangers, enemies and lovers.
For this night, disputes delayed.
All our petty gripes allayed.
Rain the perfect arbitrator,
our woes will have to find us later. 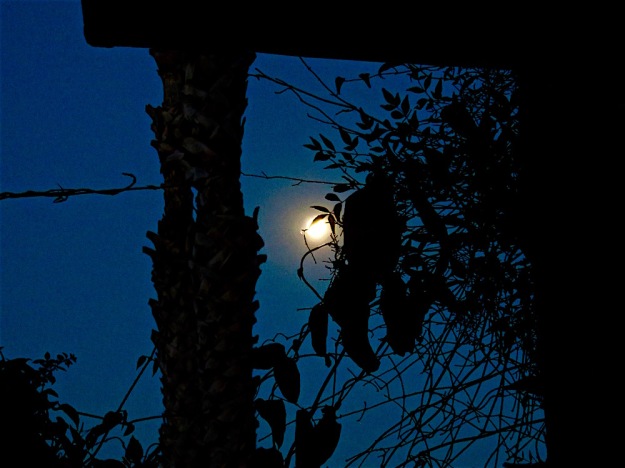 Seventy-two years old, and I still get the same thrill out of staying up late that I did when I was five years old. There is something magical about still being awake when everyone else in the house has been asleep for hours. Things go on in the night that they will never know about. The heavy rain beating on the bulbous skylight of the domed ceiling, the moths fluttering around the chandelier over the patio table, the mystery of cool night air that makes a saga out of what might have been an ordinary night spent in dreams forgotten in the light of day.

The only prompt word ready at this very early hour is saga.

The Haunted Wordsmith’s prompt is to pick up the nearest book and turn to page 62, line 6 and use that line in a story.  The book I picked up was Veils, Halos and Shackles and this is the line: “. . . .each night passing through a boundary.” 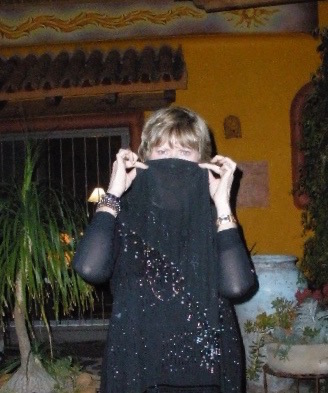 Each night passing through a boundary, every morning coming home.
Pinned to the day’s agenda with no free time for her to roam
the streets of her imagination, gathering images she’d share
in all the stories she would write if she had the time and nerve to dare.
What would they think if they knew where she journeyed during dreaming time?
Would the other wives revile her or tell their husband of her crime?

The lush banks of imagination where she went barefoot and unveiled
and did the things that in the real world would cause her to be shunned or jailed
were her reward for time in harness, being that person they expected.
Veiled and cloistered and obedient. Qualities they all respected.
But in her dreams she lived the wild world—unfettered, uncensored and free.
It was the only place in her life that she labeled herself “me.”

In that world that wasn’t her world—that place where she was forced to be—
She existed as observer, watching a self she labeled “she.”
She kept her true self safely hidden. Kept her opinions to herself.
All her precious thoughts and talents neatly stacked upon the shelf
waiting for her nightly visits when she could take them down and play
until the early morning sunlight drew her, regrettably, to day.

It’s two in the morning.
Dogs call out greetings or warnings,
the near dogs hoarse in their excitement,
the far dogs mellow and rounded
in the echoing distance.

What are they saying?
Bright moon like a bowl,
new bitch in the territory,
a whole leg bone today?

All night long they bark and bay
until 4 am when the first
then the second and the third rooster crows.

Someone throws a handful of grain
and the chickens cluck like popcorn
in a finally hot pan,
waking the city which only
seemed to sleep.

The lobby steward, waiting
for the last guest to enter,
nods at his post,
t.v. static charging the air around him.
The guard by the gate waits
for the honk of a horn.

A woman crouches
over a pad of paper in the bathroom
so as not to awaken her friend.
Her pen scratches as hens  scratch
in the dirt of the yard below her window.
The friend’s almost imperceptible
snores are a counterpoint to the music
of the first cars
accelerating up the cobbled hills.

New sounds build the symphony:
the slam of a car door,
footsteps on the stairs,
water in the pipes.

A city’s wide morning yawns
clash and reverberate
in the  still darkness
as dogs bark like a hammer
pounding repetitiously,
building the new day. 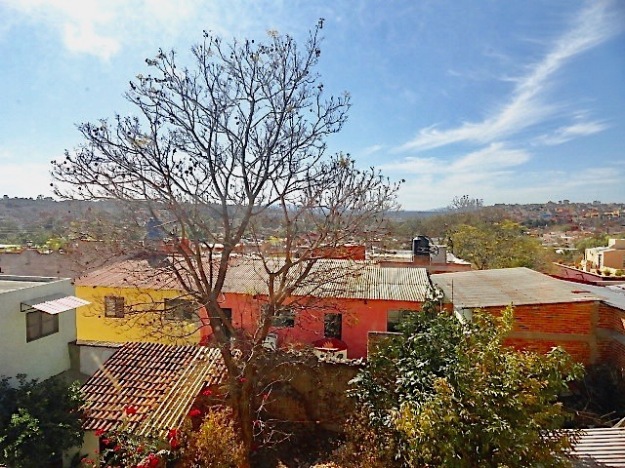 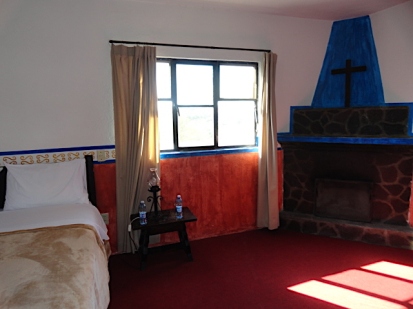 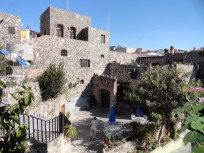 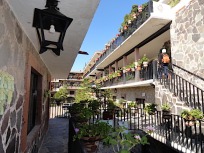 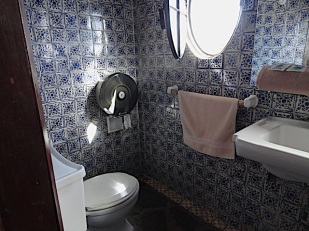 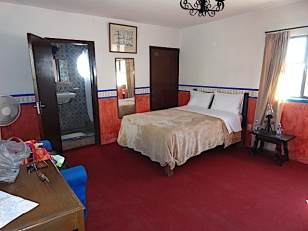 San Miguel de Allende, 2002. Click on any of the last 5 photos to enlarge all.

This old convent, converted into a hotel, is where I have always stayed when I go to San Miguel.  Bob and I stayed there just months before his death. This poem was written a few months later when I revisited our favorite places in San Miguel with a friend. That is what this poem was written. To see the poem that I wrote that night, go HERE.