When I decided to clear the lot next to me that had been a repository of all of the junk and building debris of the neighborhood for the nineteen years I have lived here as well as many years before, I had no idea how much it would take to try to make a garden out of that lot. After six months which consisted of weeks of cutting the plants that had overtaken it, then 5 hours of bulldozing and leveling, then another week to put up a fence to repel further efforts to repel passing cows as well as those accustomed to dumping junk on it. Since then, we’ve moved plants from my own gardens and purchased different exotic grasses from a local vivero. A new  super weed-whacker has assisted Pasiano with his efforts to keep the grass at an acceptable level. Yolanda’s family’s efforts to grow a small field of corn in one corner was thwarted by moles and rats and squirrels, who promptly dug up all the corn that was planted. Well, most of it. Twelve plants remain. These pictures represent our efforts so far, which look feeble, but represent a lot of work and an accumulation of dreams which will, I hope, swell over the coming years.  Next will be a large arbor to furnish relief from the sun for Pasiano and a place to sit to observe the view.

This is what the lot looked like after removing truckloads of weeds and during the bulldozing process.

This is my present view of the lot from my studio. 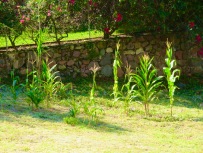 What is left of Yolanda’s crop of corn.

The pampas grass has survived its transplant and plumed out

The agave from my garden has accepted its new place and decided to bloom and the palm tree whose leaves were cropped off by marauding cows before the fence went up, has put out new branches.

The hearty many-branched zinnia volunteered to join the garden and Paciano has plans to use the seed to spread its bounty.

Now I just need to decide where to put the arbor so it will provide both shade from the afternoon sun for Paciano and a good view for whomever else decides to sit under it.