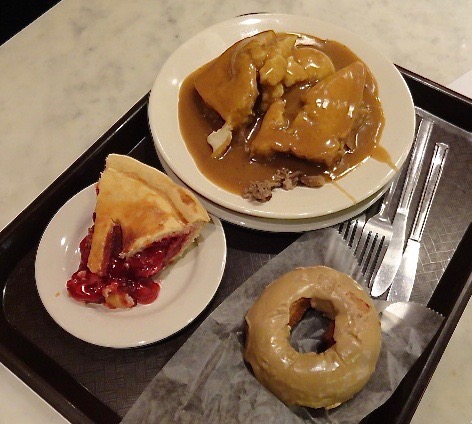 Why would my Weight Watchers meet in a restaurant
that’s a buffet where diners can eat all they want?
I guess it’s to practice resisting temptation,
but instead I am feeling severe perturbation.

Potatoes and gravy and chicken and peas
and desserts where a person can eat all they please
are simply not kosher when one should be dieting.
Instead of resisting, I find myself rioting.

I charged up to the counter and filled up my plate
with a pile of entrees I’m ashamed to relate.
Then muffins and crepes and strawberry pie
spilled over the sides and reached up to the sky.

Something about me was slightly off-kilter,
and I found I was eating without any filter.
If they’d pared down the menu, I’d have much less naughty,
and the folks at my table might have looked way less haughty.

My table mates clucked and looked sad and disgusted.
It was  clear at buffets I was not to be trusted.
Yet I noticed also some looks of regret
as they surveyed these goodies that they, too, could get

if only they had the nerve to break ranks:
scalloped potatoes and baked beans with franks,
chocolate eclairs and ice cream with hot fudge
all could be theirs with nobody to judge.

Yet what could it hurt, just one serving of gravy?
Just one piece of chicken, one biscuit and maybe
one serving of pudding without the whipped cream?
Would one scoop of vanilla really be extreme?

I saw resolve falter as one after one
they returned to the line for a muffin or bun,
chicken fried steak or some pork or some shrimp—
first with restraint, then ceasing to scrimp.

And that’s how I broke up our Weight Watcher’s bunch
after a single ill-fated lunch.
I’m not proud of my actions and the resolves I’ve killed,
but at least for the present I’m sufficiently filled!

Prompt words for the day are filter, naughty, meeting, pare and menu.