At 6 .m. the continuing noises of the party across the street awakened me. By 7:30 they seemed to have quietened, but then a new raised voice took their place. Yesterday, someone put their cow in my spare lot beside my house and after a brief period of silence last night, it has once again begun its cries of distress. I’ve called the guard house to ask if someone could check to make sure it is okay. At first they said no, but then I repeated that this is my lot but not my cow. They have said they’ll send a security car.

Ten minutes later, I myself went down to check on the cow. It seemed to be okay. The rope was not tied around its neck and its horns were not entangled in any tree or bush. It was just bawling. And bawling. And bawling. As I took this photo, the security car pulled up and a very large man got out. Was this his cow, I called down from over the wall, as my house is higher up on the mountain than my spare lot. He answered yes, and then I asked if it was okay. He said yes, that it just missed its calf. Could he not take it up the mountain to be with its calf, I asked? No, because it was eating the grass on my lot, he said. Could he not bring the calf down to its mother? How we resolved the matter I do not know, but the noise has stopped and the cow is gone. I do not at all mind if farmers graze their animals on my lot, but the separation of mother and baby ate at my conscience, not to mention being quite an annoyance as the cow brayed night and day.

Now, after a hearty breakfast,  my house guests have all departed for La Manzanilla and as I see them off, I hear that the party at the house next to the one that partied all night has started up. These are the sort of problems we face in Mexico. Noisy neighbors and overzealous cows. Happy New Year one and all! I said it once before and will say it again. In Mexico, there is always music!!! 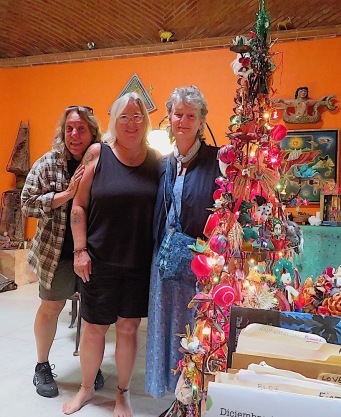 Raised Voices of the New Year

The party across the street is still going on full-tllt at 7:00 in the morning! People are screaming and singing in loud voices, albeit off-key. Is this an honest declaration of joy at the coming of the new year and the renewal of the resolutions unaccomplished in the old one, or simply drunken joy at the first rays of sun that will soon conquer the somewhat frigid air to start out the new year? Will our vision be clearer in this year labeled 2020? Will our choices be nobler and less self-serving? Will we make an honest effort to bring the world along with us in our quest for prosperity?

I roll over to seek a few more hours sleep. The party has gone dormant—perhaps to open a new bottle or to put the children to bed at last. I lie suspended in the suspense of when it will flare forth again. How can something that percussive be stilled so quickly? I count off the seconds until the next shouted expression of life. And I am not disappointed. A single maestro of tequila-augmented song lifts his voice if not his baton and the crowd roars to life again. They have renewed the drums!

“I’ll sleep tomorrow,” I vow as i pull a pillow over each ear and belie the statement already, striving for a few more hours sleep. Happy 2020!!! May both our vision and our actions be clearer and finer in the air of this unblemished new year.

1960, Murdo grade school’s 7th and 8th grade, first boy-girl party in the unfinished basement of our “new” house.  I’m the tallest girl in the 8th grade, dancing with the shortest boy in the 7th grade. I have on two different dresses in these photos taken on the same night.  I ripped the side seam out of the first one trying to duck under someone’s arm during the first dance.  I had to go change into one of my older sister’s dresses. Click on photos to enlarge.

Stumbling to stand like newborn colt,
One day suave, just now a dolt.
All creatures need to learn to be
what they’ll be one day effortlessly.

We learn our lessons through mistakes—
missed swings at balls and fallen cakes.
There’ll be missteps. That die is cast,
but adolescence does not last.

I’ve used this photo before, but the poem is new. The prompt today is awkward. 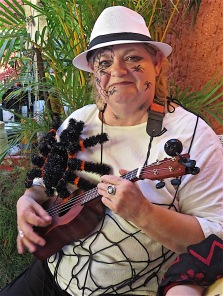 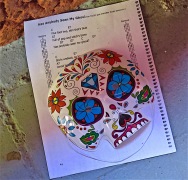 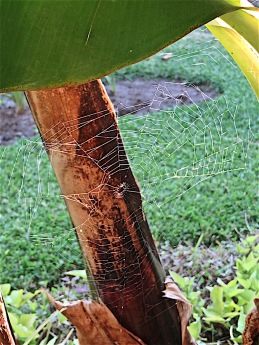 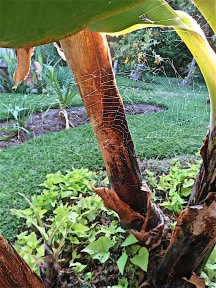 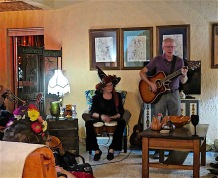 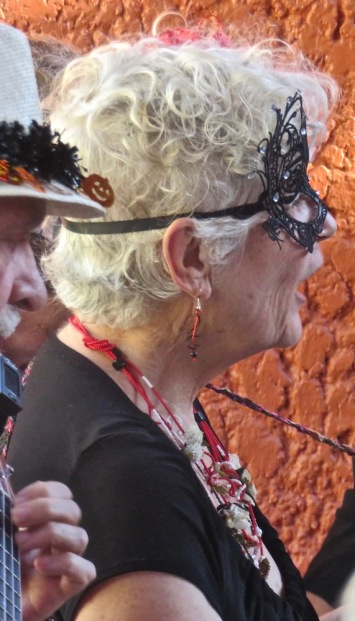 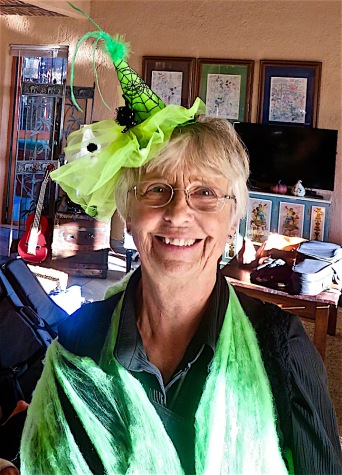 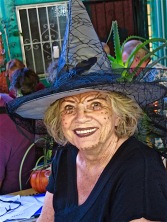 I simply have to say a few words of praise about the ability of my Mexican friends and neighbors to party!  I’m accustomed to hearing the parties going on around me every weekend, sometimes until 6 a.m., but for the first time I had a party that wasn’t comprised entirely of older (my age) American and Canadian and Mexican guests, who usually depart politely by 9 or earlier if the party started earlier.

My party for those who helped with Campamento Estrella, however, consisted of an even number of “mature” gringos and young Mexican adults ready to PARTY!  After making two gallons of frozen margaritas, I for fun put two full bottles of tequila and shot glasses on each of the long tables I’d shoved together for the party to create one looooong table.  Perhaps someone would like a shot or to add a little strength to my somewhat weak margaritas.

At that time, I thought there would be 20 of us, but stomach flu and dengue fever and other illnesses depleted the number by half so we had LOTS to eat, luckily, which seemed to lessen the effect of two gallons of margaritas and the entire contents of the two bottles of tequila on the tables that disappeared during the 4 1/2 hours of the party.

Yes, we did shots.  Yes, when we lost the shot glasses, we ended up pouring the tequila into our mouths from 6 inches or so above our baby bird mouths, the crowd chanting “Judy, Judy, Judy, Judy!’ or whatever name was appropriate. Yes, we all wound up in the pool–at least Agustin, I and the “kids” did––still waterfalling tequila.  By then we’d gone through the good stuff and were down to the smokier reposado which is the scotch of tequila and not my thing.

Needless to say, even after sending food home with Yolanda and two of the Anglo guests who had to depart before the final course, (We’d had so many flautas and so much guacamole with before dinner drinks that everyone had to rest up a few hours before dinner.) I still have an entire huge pan of enchiladas, a quart of beans and an entire flan and salad left over so what’s a girl to do?  This afternoon I’m having three friends over for Mexican Train and enchiladas with all the trimmings.  One of the ladies asked if she should bring wine.  “No!”  (I still have ten bottles I bought for the party, passed over in lieu of tequila.)  Another asked could she bring any food.  “No!!”  I still have three dozen enchiladas, guacamole, salad, frijoles refritos, salsa and flan. No one gets into this house bringing more food or liquid refreshment. No one gets out until the food, at least, is all gone.

So here it is folks, my photo essay in PRAISE of the Mexican talent for PARTY.  Not so many photos as I was pretty busy making up more frozen margaritas and well, yeah–finding extra swimsuits for 7 people and dodging tequila shots.  And no, not a headache nor any hangover this morning.  I suggest Hornitos as a really good brand of tequila. The bottles went out with the morning trash, but here is a photo of the cap I saved for my scrapbook wall: 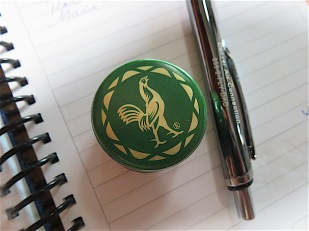 Here are a few shots of the enthusiastic guests.  No doubt they’ve already posted videos of the party on their Facebook pages, but I’m going to make do with these shots frozen in time:

(If you’d like to view them in a larger size and read captions, click on the first photo and arrows.) 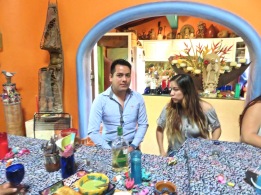 The margaritas and flautas were a big hit as we sat outside, but once we moved inside to the big table

and the partiers spied the bottles of tequila on the table, Los Hornitos ruled the day. (The bottle may have gone out in the trash, but I got a photo that didn’t so here is the bottle of tequila I recommend! Hornitos. Not harsh going down. Not harsh the morning after.) 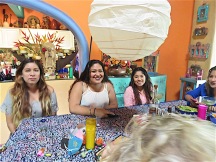 created great enthusiasm among the senoritas.

Agustin was driving, so he stuck to wine. 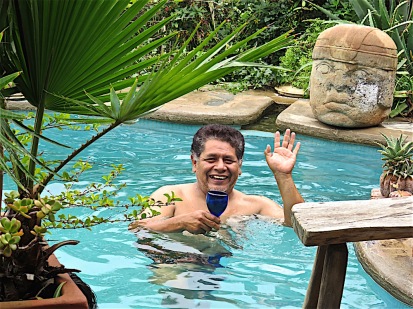 i brought him a plastic glass for his wine shortly after this photo was taken. 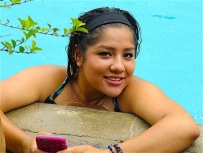 Karen’s phone is never far from her side. This one captured a few videos that are probably already on Facebook.

Then I brought out the noodles

and the badminton racquets.

It proved to be a good plan to have one person remain outside the pool to rescue birdies flown away.

Agustin? Time to come out of the pool and eat again!!! Agustin???

Pleasure is everywhere.  It’s just up to us to pick it.

Click on first photo below to enlarge your pleasure. 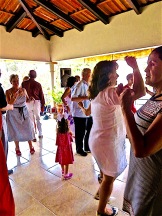 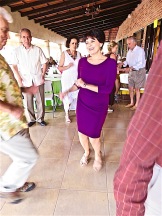 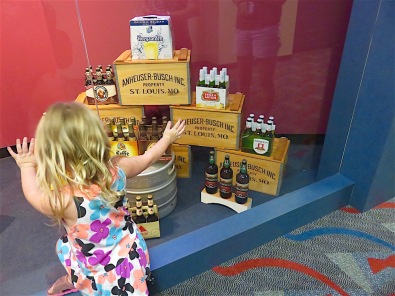 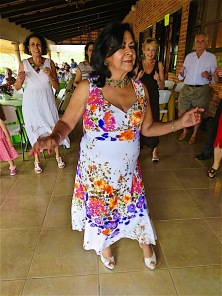 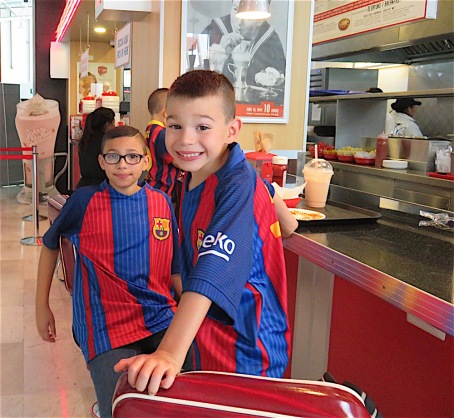 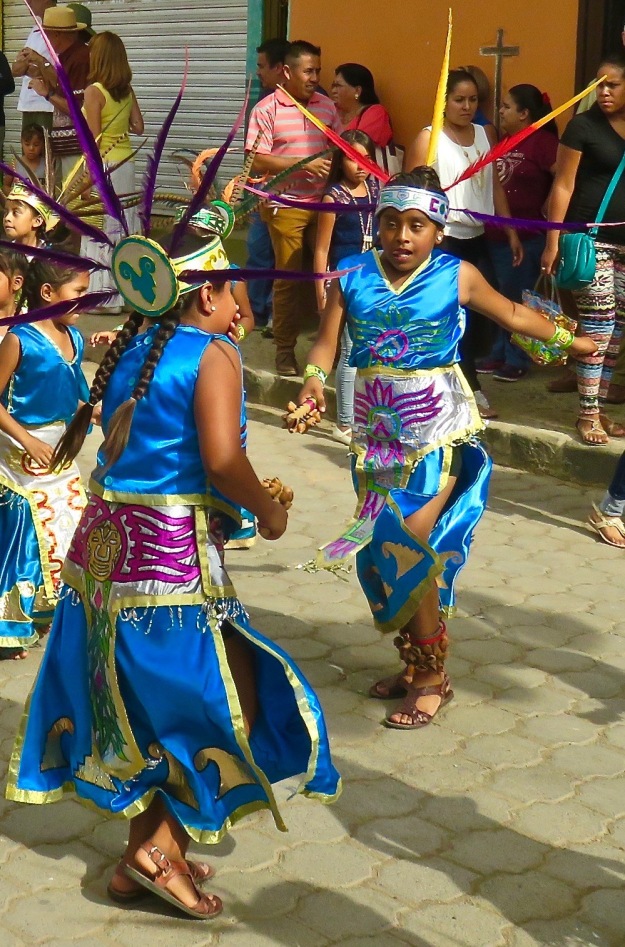 I used to roll with laughter most every day or so.
My parties were all riotous. No one would ever go
back home again till two or three or four or five or six.
And some would stay for breakfast, prerhaps hoping that I ‘d fix
my special chocolate waffles or orange berry strudels
or curried eggs or cheesy pie or strata made with noodles.
We’d story-tell and play charades and I admit, we’d drink
and stage our paper yacht races within the kitchen sink.
The guests might come in costume and some might bring a friend
for I had grown notorious for parties with no end.
When I was a teacher, I’d invite the whole darn staff.
Away from school, our hearts were gay. We dearly loved to laugh!
But this was years ago, my friend. Our hearts were young and gay.
Now that we’ve lived past sixty, we live a shorter day.
When I have my friends over to play a game or dine,
some find the spices don’t agree and others shun the wine.
Some have little dogs at home they have to feed by five.
Others have eye problems and find they cannot drive
after dark at all and so they have to leave by seven.
I guess our laughter’s done on earth. Perhaps we’ll laugh in heaven.

Daily Prompt: Roaring Laughter—What was the last thing that gave you a real, authentic, tearful, hearty belly laugh? Why was it so funny?