My brother has a reputation for excessive lingering.
I think he has advanced degrees in mooching and malingering.

The black sheep of the family, the brunt of all our jokes,
at forty-three he still receives an allowance from our folks.

He ruins family dinners by being loud and brash.
His favorite interactions end up in a clash.

Discussing brands of vodka or motor cars or fashions,
he’s bound to expound at great length about his latest passions.

His family is his outlet for letting off his steam.
His exquisite taste in clothing dissected seam-by-seam.

We get no word in edgewise when conversing with this brother,
so when choosing a table mate, I veer toward any other.

There’s one in every family, it’s true right down the line,
but if you’ve one you’d like to trade, I’d gladly trade you mine.

Prompt words today are discuss, outlet, malinger, clashes, brash,allowance, exquisite and vodka.  (I took this picture but it is not my family.  I took it at a town reunion years ago and it is used for illustrative purposes only. I don’t have any brothers, so the guy  in the poem is fictional, but you might recognize him anyway.)

This is one of three waterfalls that spill down the mountain behind my house during the rainy season.

You, my wild and rushing daughter
remind me of falling water
spilling  from one place to another
while your sister and your brother
are calm ponds—docile and still.
Do you think you ever will
come to rest within our glade
or will you continue to cascade
from mountainside to jungle floor,
always rushing out the door
to adventures in a farflung world?
Another part of you unfurled
in some new place and some new time,
a foreign place you find sublime.
We’ve had one life. You’ve had a few.
Why, love, will one world not do?

For the Rag Tag Daily Prompt, the word of the day was cataract.

Although I don’t have a brother and my family did move around a bit (but not as much as I have,) this poem was based a bit on the only letter my father ever wrote to me. I had been traveling and working abroad for a few years by then, first in Australia, then in Singapore and Africa. I’ve remembered one of sections: “The wild geese have rested on the pond for the night. They remind me of you, my wild fledgling, winging your way across the world with no place to call your own.” Those words, so poetic, show a side of my father I wish he had brought out more frequently on paper, so here I’ve done it for him.

The NaPoWriMo prompt today was to write a ghazal. A ghazal is formed of couplets, each of which is its own complete statement. Both lines of the first couplet end with the same end-word, and that end-word is also repeated at the end of each couplet.

My sisters and I. Strangely enough, there is not one photo of my mother and father and the three of us girls together. The only family photo ever taken was before I was born.

The youngest of three, every day down unpaved roads, I tracked my sisters’ footprints.
Nancy Drew wannabe, who needed  fingerprints when I could read their footprints?

My mother’s closet a treasure trove, hidden wonders lay obscured on the tallest shelves.
I fanned her dresses with my fingers, slipped into red high-heels that bore her footprints.

Careful where you walk, my father warned, parting tall grass near the homestead ruins.
Fearful of snakes, I fit my own feet to matted grass that marked my father’s footprints.

That frightening choice of colleges facing me, I knew no other way to decide
than to go where she’d gone, and follow in my sister’s footprints.

The obligation of college over with no more paths worn by other feet to follow,
I chose  Australia, Indonesia and then Africa––following imagination’s footprints.

My niece’s teeth clamped to the old saxophone as its mouthpiece snapped in two,
worn by each of the girls in our family and then by her, as she followed in our footprints. 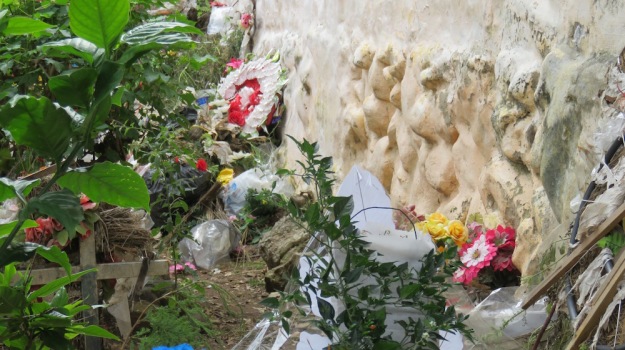 Caught in the tangles of last year’s castoff wreaths in our local cemetery, I found the following words. They were scrawled in  a frenzied adult handwriting in fading purple ink on a curled yellowing slip of lined  paper with one jagged edge, as though it had been ripped from a journal:

Behind the door of my dream, I heard a knocking. I walked down a tree-lined corridor to the door at the end. As I drew nearer, the knocking grew louder and more frenzied. I struggled with the bolt, which would not open, but as I finally drew it back, there was an explosion of sound—organ music playing a dirge in such a joyful manner that it sounded like a celebration instead of the reflection of death.

As the door creaked open, I heard the crash of glass breaking and then the tinkle and scrape of this glass being ground down to shards and powder as the door opened over it. There was such a bright light shining from behind the figure standing on the other side of the door that I could make out only her silhouette—a woman with an elderly stance wearing a long skirt. She was large of bosom and had thin wisps of hair piled untidily on top of her head. In one hand, held down to her side, was a basket. In the other hand was a jar.

I drew closer to the woman, to try to get her body between my eyes and the source of the bright glare—to try to see who she was. When I was but six inches from her, I finally recognized her as my grandmother. She was wearing the same navy dress with pearl buttons and gravy stains down the front that she had been wearing the last time I remember seeing her. In the basket was a mother cat with three kittens nursing. In the jar was chokecherry jelly, if its handwritten label was to be believed.

As I drew up to hug her and kiss her cheek, she started humming a song—some church hymn, perhaps “Jesus Loves the Little Children.” It was hard to recognize because she hummed it under her breath—with little inward gasps at times that made it sound like she was eating the song and then regurgitating it.

Her eyes were vacant as she looked over my shoulder. “Grandma, it’s me!” I said, but she still didn’t look at or acknowledge me.

“Do you want to play Chinese Checkers?” I asked. It was the one activity I could remember that both my grandma and I enjoyed.

She expressed a long intake of breath, shook her head no and held out the basket to me.

“No, it is an obligation,” she hissed, and as the basket passed from her hand to mine, she seemed to deflate—whooshing backwards out of sight—until only the basket of cat and kittens and the jar of chokecherry jelly lying sideways on the trail she had vanished down gave testimony to her presence.

“Bye, Grandma,” I called wistfully down the trail she had vanished down. “I love you.”

But I didn’t love her. I had this memory of sleeping with her in her feather bed and almost smothering trapped between the thick feather pillow and comforter. I have an explicit memory of holding the pillow over her face and her struggling to get free. It was a joke and I hadn’t meant to smother her, really, but there was such power in the fact that she could not fight off an 8-year-old girl that it made me hold the pillow over her face for a few seconds longer than I wanted to or should have. She was all right. Just frightened as I had been frightened so often by her stories of poor little Ella and all the wrongs done to her in her lifetime. It was as though I had to choose sides—her side or the side of the people who had done mean things to her. And like the little devil she always made me out to be—I chose the other side.

The Prompt: Everything Changes––You encounter a folded slip of paper. You pick it up and read it and immediately, your life has changed. Describe this experience.https://dailypost.wordpress.com/prompts/everything-changes/