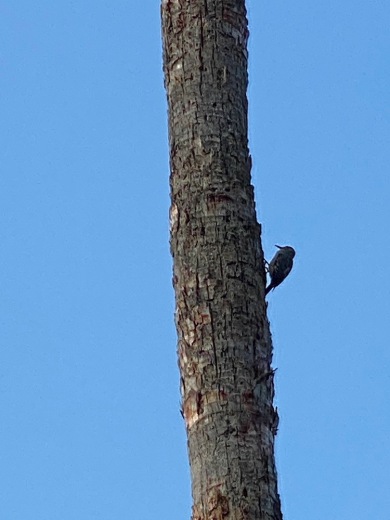 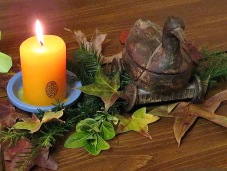 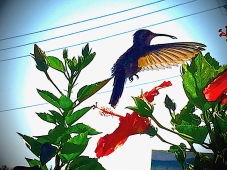 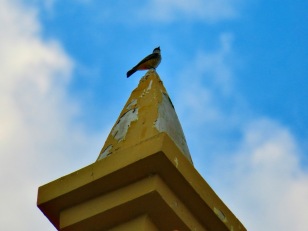 Fleeting Moments are built into nature as they are into our lives. Be they beautiful memories, unbelievable experiences or disastrous events, they come and they go–often too quickly. Many would be forgotten were it not for the click of a lens. Here are some of mine.

Old people mumble and snicker and stare
at the last of my lineage ‘s bright lilac hair.

If I’m the most banal of all of my kin,
at ingenuity, she’s bound to win.

I’m reluctant to ask why her clothes are so worn:
so faded and rumpled and tattered and torn.

I immure my comments between lips of stone,
for she’s flesh of my flesh and bone of my bone,

with a mind of her own and unique from the start,
the last of my grandkids has most of my heart. 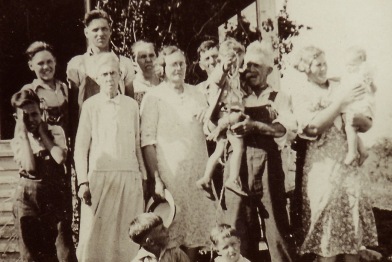 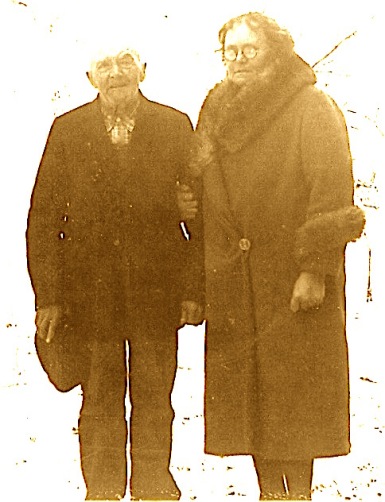 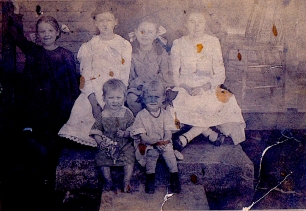 Dad and cousins, his mother, her sister Susie and my oldest sister, Betty Jo. This must have been taken around 1940

When I was ten months old,

Family Christmas–Grandma, Dad and me.

Thanks, Mom, for all of those early rhyming sessions 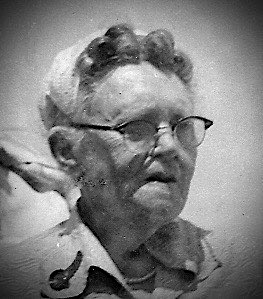 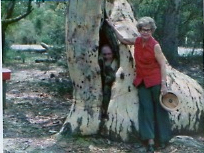 Mom and Dad in Australia. He finally got to travel–to come visit me. 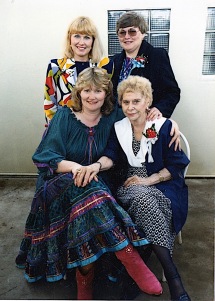 With Mom and sisters, at my wedding. 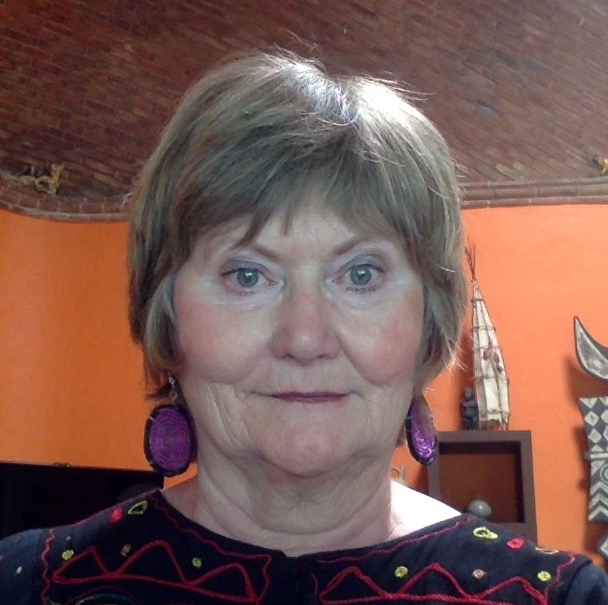 These are the gifts I was given at birth:
my father’s high cheekbones, my auntie’s wide girth.
Legs that are solid and a brain that is sound,
a head that’s too big and a stomach too round.

From my mother, a funny bone and a fine wit
in sharing my life by writing of it.
A talent for rhyme and a need to be telling
stories original, tight and compelling.

A thirst for travel, squelched in my dad,
allowed me adventures he rarely had.
A love of babies and a wicked humor
that didn’t go wasted in this baby boomer.

I’m forever grateful that I came to be,
thanks to those genes that created me.
With both foibles and talents, I’m not perfect for sure,
but all that I am, I have come to endure.

I’ve lived to an age where I appreciate
all of the gifts that I’ve come to relate.
Here I am, the next link in the family queue,
and what they shared with me, I now share with you.

Today’s NaPoWriMo prompt is “to write a poem in which you muse on the gifts you received at birth.” 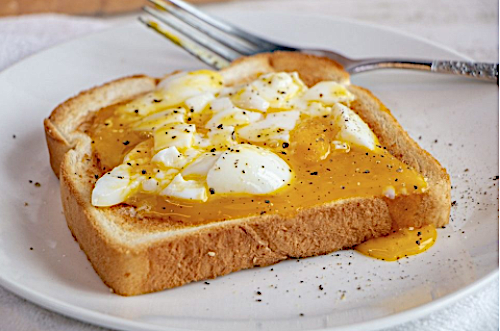 He holds the hot egg in one hand, turning it as he taps it gently with the knife edge in a perfect horizontal line, and lifts the top off like a skull cap to reveal the molten golden lava of the half-congealed yolk. It spills out in a river as he moves his spoon around the shell to remove the white in one solid unblemished half-oval—shining, still steaming from the boiling water it has so recently been surrounded by.

The egg rests on the square of toast and is soon joined by its equally perfect other half, mashed
onto the toast to be lightly sprinkled with salt, dusted with black pepper. Then, the final perfect ingredient to this gracefully executed breakfast favorite—one delicate sprinkle of cider vinegar from the tiny stoppered glass vinegar cruet and the neat slicing with fork and knife, the lifting to lips, the dabbing of yolk from the plate with another triangle lifted  from the toast plate.

The final smacking of lips and the long satisfied sigh as he places his knife and fork across his empty plate. My father, a large man with work-hardened hands, is like an artisan in his neat and graceful maneuvering of the utensils, his napkin blotting any errant egg from his lips before raising, at last, the coffee cup to his lips to wash it all down.

Soft boiled eggs, toast and coffee. Bright yellow, white and brown are the colors of the morning as the school bell rings and I am off in a mad dash to slide into my seat in my schoolroom across the street before its last peal.  This memory of my father eating soft boiled eggs was early morning poetry that I have not forgotten half a century and more later. It is the little things, the small beauties, that stick like liquid yolk to our memories.

My father put vinegar on everything from cabbage to eggs. I loved to watch him eat, for it was at the table that he was transformed from  a hard-working farmer-rancher with wheat in his pants cuffs to a cultured gentleman with impeccable table manners. In this prose poem I try to replicate my father’s artistry in disassembling a soft-boiled egg. The cruet above is one of the few objects I claimed when I went to pack up our house after my father’s death. I still use it for cider vinegar, and think of my dad every time I open the cupboard and see it on the shelf.

This is the entrance to the  Ashton Wildwood Park that has now been dedicated to  my former brother-in-law Denis Wilcox who passed away a few months ago. We had the dedication for it on  Friday. The dedication arch has not yet been completed, but here is the stone marking the area that he maintained for so many years. He was also on the conservation board for the park.

And a photo of the whole crew: kids, their spouses, grandkids and former sis-in-law. 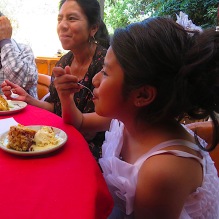 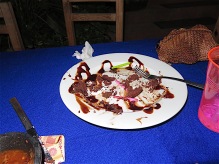 Why Bakeries Were Invented

I’ve baked the cake, but cannot get the damn thing from the pan—
the problem being, mainly, that sticky layer of flan.
My daughter had demanded it, persnickety like her dad.
How had she ever heard of flan? I guess it was a fad.

I poured the custard in the pan and covered it with batter,
not sure whether the flan went first or if it was the latter.
Ten minutes in the oven and the glop began to rage
as though it was an animal, intent to leave its cage.

It roiled and fluxed, formed bubbles and spouted like fresh lava.
I lit a cigarette and poured another cup of java.
Although it was her birthday, I rued the day I’d asked
what kind of cake she wanted, for in this I’m sorely tasked.

But surprisingly, this devil cake did not escape its boundaries,
in spite of all my puzzlements and all my gross confounderies.
Now that I’ve finally got it out, I really am exhausted—
only to hear her next request. Now she wants it frosted!!!

photo by Jason Briscoe on Unsplash, used with permission

The Drying of Sheets in the Wind

When the world seems in a mess and you wax sanctimonious,
railing at the ills of those who make it less harmonious,
remember that life’s curses are only temporary.
When world events eat at your mind and the world feels scary,
remember bed sheets on the line, drying in the sun—
the sound of flapping in the wind as their drying was done.
The smell of bright clean sunlight on each wind-softened fold,
or the cracking of their ice crystals stiffening in the cold.

Remember their warmth around you, fresh from mother’s mangle?
Snapping them out in the air, her bracelets’s harmonious jangle?
Her even movements folding them, then spreading them once more
for you to slip into your bed as she stood at the door,
storybook in hand for that nightly big procession
through story after story, read in that grand progression
of venturings into a world that seemed so vast and magic,
long before you knew the world to also be so tragic.

Let memories of your mother still be a comfort to you—
with memories of fresh white sheets. And let them both renew you.

Prompt words are sheets, temporary, curse , sanctimonious. Wow. What a list. How are these going to come together?

As each wispy object she attaches to her face,
these extraneous objects seem somewhat out of place.
They flutter  from her eyelids like moths before the flame—
just the opening number in her makeup game.

As she smooths on her concealer, then powders over all,
she does not see me watching her out here in the hall.
Never does she hesitate. Brushes grow ever finer
as she patiently applies shadow and eye liner.

She does it all so expertly with such consistent flair,
then carefully begins to work to rearrange her hair.
A little mousse to set the curls, a little spray of mist
and she’s prepared a face that is ready to be kissed.

When she comes home, the hair is mussed, one eyelash is askew.
One eyelid seems to be of a slightly lighter hue.
Although her hairdo’s fallen, still her mood seems somewhat lighter.
Her lipstick gone, and yet somehow her color seems much brighter.

One little word transforms a girl to another realm.
Makes an unsure teenager the captain at the helm.
Just change “make up” to “make out” and her heart takes wing.
And woe to any parent who notices a thing! 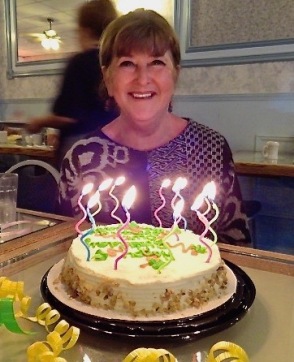 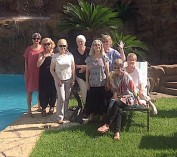 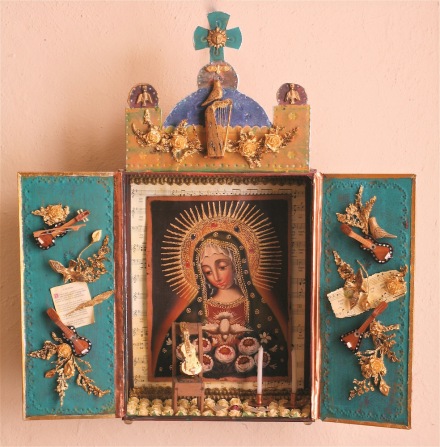 For A Photo A Week Challenge: Favorite Things