This duck came all the way across the lake to see us, hoping for crumbs. Sadly, we had none.

Okay, I cheated a bit. Just no real doves or darters in my photo files. I made these detritus birds out of shells and a fruit crate that washed ashore during past years at the beach. Keeps me out of trouble.

For the Bird Weekly Challenge

An inherited tendency that rendered him pugnacious
was a quality that caused his friends to label him audacious,
but luckily this acting out, though maddening, was fugacious,
because they’d found his surly mood was frequently contagious.

In between his pouty moods, he had a great ambition
to write great works and stun the world with his erudition.
He’d be a star. The Pulitzer would be his life’s great crowning.
Sadly, his words rarely occasioned moods other than frowning.

In the end he turned to a lifestyle less vivacious
than the pen. Alas, he chose a comfort more herbaceous.
His solace was that healing weed that smoothed out disappointments
and made action barely possible—let alone appointments.

He stopped visiting taverns to hang out with his mates.
Did not return their phone calls and cancelled dinner dates.
His doors, once open, stayed sealed tight with vapors only seeping
under their cracks to hint at the company he was keeping.

He ceased to be pugnacious, erudite or anything.
Dust blanketed computer keys. He heard his cellphone ring
as friends all tried to reach him but I fear it was in vain.
They tried a dozen times before not calling him again.

Sometimes, cures are worse than the thing that they are curing.
To have their crusty friend back would make bad moods worth enduring,
but, alas, it was too late. In life it is allowed
to make our own decisions. Thus, he vanished in a cloud. 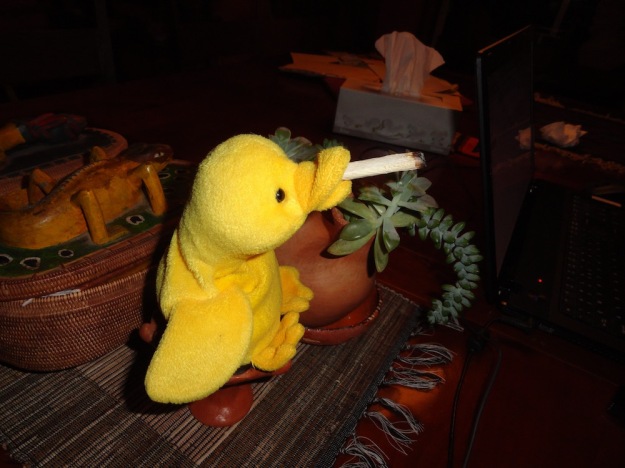 He sits there on his little tail
maintaining he does not inhale,
but every time he deigns to speak
the smoke that issues from his beak
is not all that he’s taken in.
We tell him it’s a double sin
to fill his lungs with acrid smoke
and then to lie to all the folk.
We all know Little Duck’s too young
to mess with trachea and lung.
Those who take gambles respiratory
wind up with a tragic story.
But no duck I have ever known
will listen to his parents’ drone.
We take his privileges away,
but still he chooses to puff away.
We hide his fags and hide his lighter,
now and then pull an all-nighter
making sure he doesn’t smoke,
but once we’re gone, he takes a toke.
No matter what our perturbation,
we cannot stem his inhalation!

(If you’re not familiar with Little Duck, HERE is some backstory.)

The prompt word today is inhale.

Please click on first photo below to enlarge all the photos and read the poem that is presented as their captions.

When I am home, I am up on a shelf, high up in the air, and all by myself, 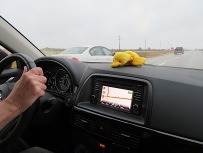 but when they go traveling, I go along so I can help out telling  right way from wrong.

How far are we going?

Where have we been?

That a way. Nine miles or ten? 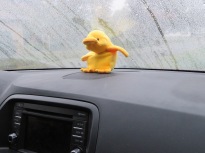 Which way should I face to tell where we’re going? Which way is best to be in the knowing?

How can I help you down here in this hole? Vacationing backwards is not my main goal.

I know I’ll do better up here on the dash.  I’ve room to spread out ‘cuz it’s less of a mash.

Should I inform with a wing or a quack? 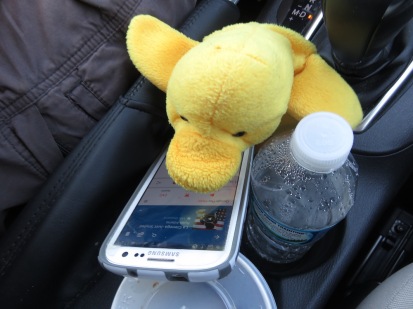 It is a good thing that I’m here within sight

‘cuz Mom’s only looking at trees and at barns. 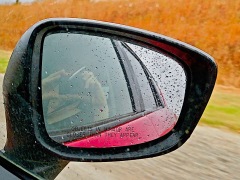 Clicking her camera and spinning her yarns. 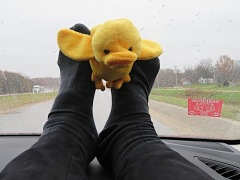 She thinks that she’s helping me plan this excursion,

but in fact she is simply creating diversion! 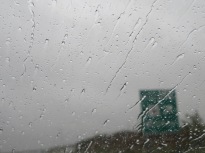 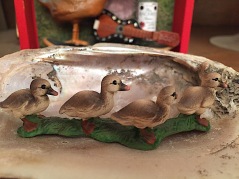 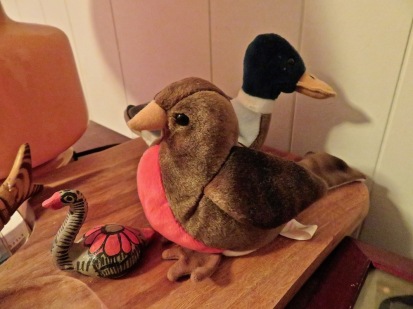 It was Duckie’s niece Hummie who first christened him “Duck,” when she was too little to pronounce “Doug.”  I complicated the matter by calling him Duckie and since then, Ducks seem to have flocked into his life.  From me, from our friends Gloria, Patty and Judy (posthumously) from another friend Nancy and from his friend Ann. Now, as you can see, he is being kept busy keeping his ducks in a row. You might recognize Little Duck of past blogging fame in this lineup.

The Ragtag prompt was spiral.

(That brought him to a standstill.)

Some of you have been following the adventures of Big and Little Duck, but for those of you new to my blog, since Ragtag’s Daily prompt is “Duck”, this seems a good opportunity to catch you up on their history.

Here are some links to their past adventures:

Far be it from me to break the law by taking Little Duck out the the car in this Tennessee rest stop without a leash. He was indignant, but what’s a mother to do? Big Duck chose to stay in the car.

Please click on first photo to enlarge and see captions that will guide you through Little Duck’s typical day when in Mexico. (Please remember he now resides in Missouri.  We miss him so.) 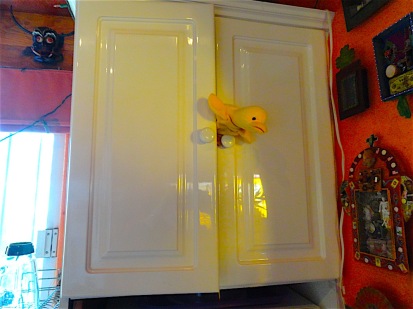 Little duck emerges from his handy little private condo in the kitchen cabinet..

He supervises Yolanda as she chops up peppers and onions to his exacting instructions.

Learns once more that a watched toaster never pops. 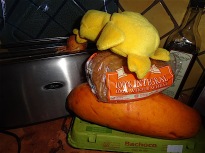 Utilizes other breakfast ingredients as a utilitarian aid in extracting the toast from the toaster.

Takes a wild ride on the kitchen turkey. 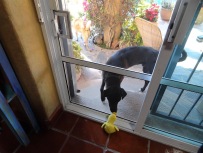 Schmoozes with Diego, who is attracted by his aura of kitchen smells.

Takes in a poetry reading by another Duck.

Then a puff on his daily vice, 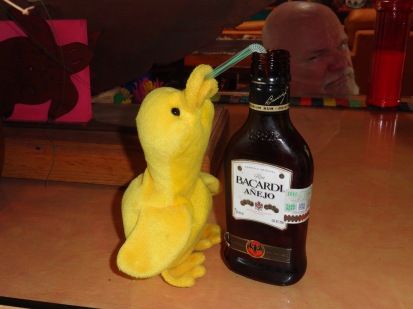 along with just a sip of Judy’s private stock 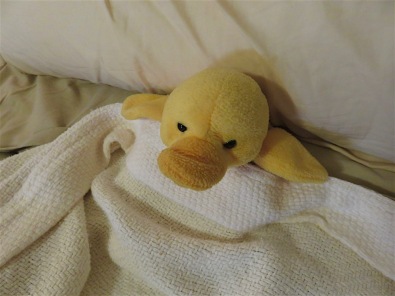 And so to bed, to dream of the next day’s adventures.

Thanks to okcforgottenman for the last photo of Little Duck off on a new adventure in Missouri.  (Sob.) We miss both of our ducks down here in Mexico!!!

This posting is for Cee’s  “Duck, Duck, Goose” challenge.